The lit-up thief in Githurai 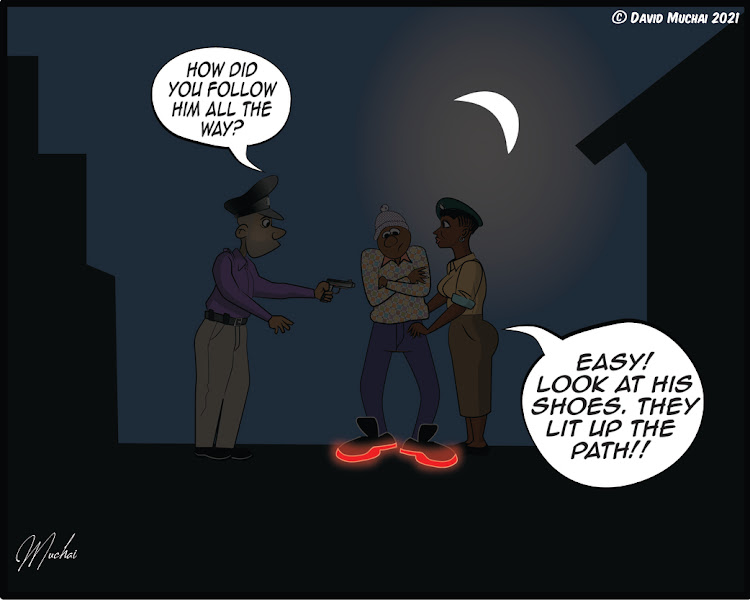 Sgt Sophia and I are stuck in Githurai for the night. We had come on a visit to her mother, who had claimed she was dying, only to find her healthier than a well-fed Maine Coon.

If you’ve never seen one of those, it’s a cat the size of a small calf. Sgt Sophia’s mother happens to be one of those bad parents who employ manipulative tactics to their benefit.

You can understand why Sophia is suddenly in a mood to drown her sorrows in the brew. We find a small joint packed to the gill with jolly locals. The music is so loud, you don’t hear it, you feel it in your insides. New meat, Sophia gets hit on from all directions. I believe I hear someone promise to buy her mburoti maguta maguta (prime land).

“You want me to be your fourth wife?” she asks. “What’s the matter with the other three?”

“They are all fine,” says the pot-bellied suitor, “but none of them is you.”

I elbow her playfully. “Technically, he’s right, you know.”

“Technically, he can go to hell,” she whispers back.

The locals are nice enough, especially when we offer to buy a round of drinks. Soon, the inebriated men begin sharing Githurai jokes.

Drunken laughter all around.

Laughter and high-fives circulate around the room. I’m having fun but Sophia, not so much. “What’s your problem,” I ask. “Still thinking about your mum?”

“Whose mum? No, I’m worried about all these self-deprecating jokes.”

“I was once called to a crime scene at a bar. Three guys dead. The reason? A bunch of guys began telling ‘Yo mama’ jokes. You know, yo mama is fat, when she fell I didn't laugh, but the sidewalk cracked up. Stuff like that. Next thing you know, one guy whips out a knife and stabs two guys. The other patrons then beat him to death.”

I push my beer away. “Way to ruin a party, Sophia.”

Actually, it ends better than either of us would have anticipated. No one gets on anyone’s nerves, no one stabs anyone at the bar. As we leave to go to our rooms for the night, a tall, lean young man steals Sophia’s phone. More inebriated than her, I’m not as quick off the mark as she is. Soon, she and the thief disappear into the night.

Weirdly, though, as she goes after the man, she keeps laughing her head off. So all I have to do is keep up with her sound. Left into an alley, right into another. Over a fence and across sewer trenches. Sophia’s laughter lights the way. Finally, I catch up to her. She has the thief down on the ground, fashioning make-do handcuffs from the man’s belt.

“The hell is wrong with you, Sophia?” I ask, running out of breath.

“This fool knows Githurai better than me, yet he couldn’t escape me.”

“Actually, I’m impressed. I didn’t know you could run that fast.”

“Not entirely my doing.” She points down. “Look at his shoes.”

I do. All I see are fashionable sneakers. “What about his shoes?”

“Stamp your foot,” Sophia tells the guy. The young man does as he is told and lo and behold, the soles of his shoes light up. “I could see him a mile away.”