I get the right guest at the worst possible time

Patient-nurse crush is put to the test by unexpected visitor 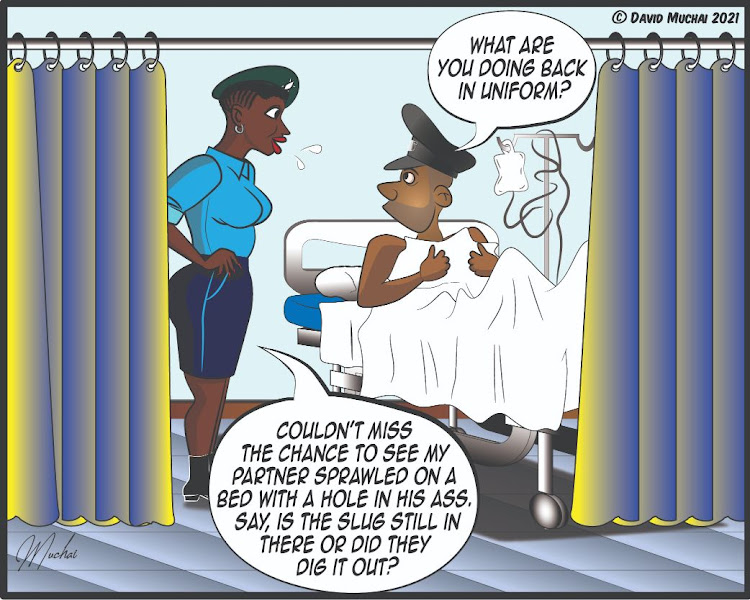 I’m recuperating at Kericho Level 5 Hospital from a gunshot wound to my buttocks. As a police officer, being shot brings out all kinds of emotions in people, mostly sympathy for getting injured in the line of duty. Same as a carpenter falling off his ladder while fixing a roof.

But just as a carpenter — basically anyone — falling off a ladder is hilarious to some, so is an officer taking a bullet in the butt. I’m getting more sneers than cares.

But in my first week at the institution, I’ve managed to make a friend. Her name is Betty Luka, a nurse who works the night shift. So far, I know she’s a Pisces, a widow with five-year-old twin daughters, loves strawberry-chocolate sundaes, and her favourite flower is the Oleander. Never heard of it, but she swears it’s magical. She also has the softest hands of any woman I’ve ever met, short though the list is.

I’d say her smile is magical. “How’s my favourite patient?”

She blushes. “I listened to that Gregory Isaacs song last night, you know. Found myself dancing and wishing you were there.”

“I meant, wishing someone was dancing with me.”

“For a minute there I thought we were about to have an English Patient situation.”

She frowns. “I don’t understand.”

“It’s a classic World War II movie. Nurse falls for her patient. My girlfriend used to make me watch it all the time.”

She busies herself tucking the covers around me. “I didn’t know you have a girlfriend.”

“Used to. Way back when Noah was building his ark. You’re not jealous, are you?”

Betty smiles. “Me? No! Why would I be? Besides, we’re not allowed to have romantic entanglements with our patients.”

I hold her hand, look her deep in the eyes. “How long do gluten wounds take to heal?”

She blushes some more. “You mean gluteus wounds? You should be going home in less than a week, but I’m only your nurse. The doctor will have the final say on it.”

“In that case, in one week’s time, I’ll take you out for the largest strawberry-chocolate sundae in Kericho.”

“Wow! Aren’t we getting chummy with the help,” a familiar voice says from behind nurse Betty, who quickly pulls her hand from mine.

“It’s not what you think.” Betty hurries around the visitor and out of the room.

“Sgt Sophia?” The sight of the retired colleague I had fallen in love with standing in my hospital room sends me for a loop. “What are you doing here?”

“Couldn’t miss the chance to see my partner sprawled on a bed with a hole in his ass. Say, is the slug still in there or did they dig it out? Please make my day and say they dug it out.”

“Wait! You’re in uniform. I thought you quit the force.”

“I did, but guarding millions of shillings tempted me to drive the security van to Congo and live among the pygmies.”

“Of course not. I was describing you, if you don’t heal up quick and join me in Jiji Ndogo.”

Before I can ask more questions, she U-turns and leaves the room. Seconds later, nurse Betty marches in, looking like a bull facing a matador. “Is that her?”

“Your girlfriend. Way back when Noah was building his ark.”

She footslogs out in a huff.