A fugitive is a literal pain in my behind

Attempt to take down an escapee backfires on Sgt Makini

• Crook on the run livens things up in Jiji Ndogo, but not how resident cop expected 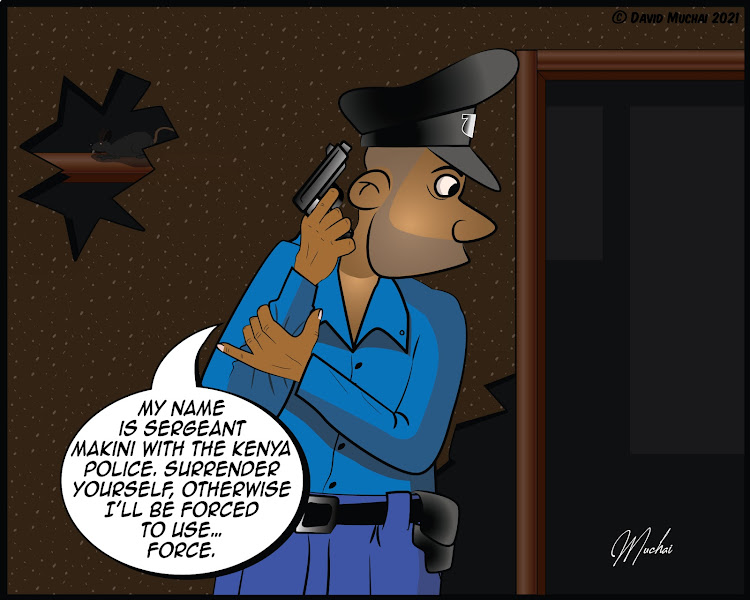 Being a resident in Jiji Ndogo should be listed among A Thousand Ways To Die. There isn’t much to do here. When bored, which is often, you can prolong a lunch at Kula Ulipe hotel, but Fatma Nono, the proprietor, will kick you out before you’re through the comics section of the free newspaper provided.

On Sunday, you can visit Our Lord The Saviour Church, where Deacon Kongo screams at you about eternal fire and brimstone that awaits those who come to service and go back home with money they didn’t tithe. There’s also a crammed kiosk called Supa Sinema, which plays DJ-narrated movies with such characters as Shon Klod Van—ndama and Sil Fester Staroon.

So, when news comes over the police radio of a fugitive headed to Jiji Ndogo, I am more than excited to finally get some action. I’m also extremely scared. You see, the bulletin warns that the fugitive is armed and dangerous. As a police officer, I am also armed but by no means am I dangerous.

During basic police training, one is supposed to hit about half of roughly 40 targets. After rigorous training and hours at the shooting range, I was able to hit all of 12 targets — 13. if you count the one I kicked with my leg out of frustration. And now, here is a fugitive coming my way who might be better with a firearm.

The question is, why Jiji Ndogo? Apparently, this man had shared a prison cell with one of the men who had abducted a baby and dumped her in our “backward” village. Once the con decided to burst out of prison, he knew exactly where to hide, and his former cellmate knew exactly what info to rat to the wardens for a possible deal on his sentence. Talk of honour among criminals, huh?

I get Gwendoline Nyaguthii, our resident rumour spinner, to pass around the word of a dangerous stranger who might soon be in our midst. But to mitigate panic, I tell her the man is a chicken thief. Chickens are a huge deal in Jiji Ndogo.

Soon I get word of a man lurking inside an abandoned shop in town. After clearing curious rubberneckers from the scene, I brace myself to breach the building. That’s police talk for entering forcefully into an establishment while armed and in the ready. So, I don’t so much breach as push open the door and shout:

“My name is Sergeant Makini with the Kenya Police. Surrender yourself and I promise you won’t get hurt; otherwise, I’ll be forced to use… force. I’m prepared to use legal — I mean lethal — force if necessary.”

Contrary to my hope and expectations, the man doesn’t heed my warning. Bolstered by an old, ill-fitting bulletproof jacket, I thrust my gun forward, rush inside, plaster my back against the dusty shop counter in full commando mode.

I’ll be lying if I tell you I remember all the details of what happened in the next few minutes. I remember seeing a moving silhouette from the corner of my eye, I remember ducking for cover, and I remember hearing a loud bang followed by a sharp blow in my back.

Next thing I remember is waking up prone in a Kericho Level 5 hospital bed, ace bandages wrapped tightly around my midsection.

“What happened?” I ask the kind-faced nurse looking down at me.

“You got shot in the ass,” she says with a sinister smile and a multitude of dimples.