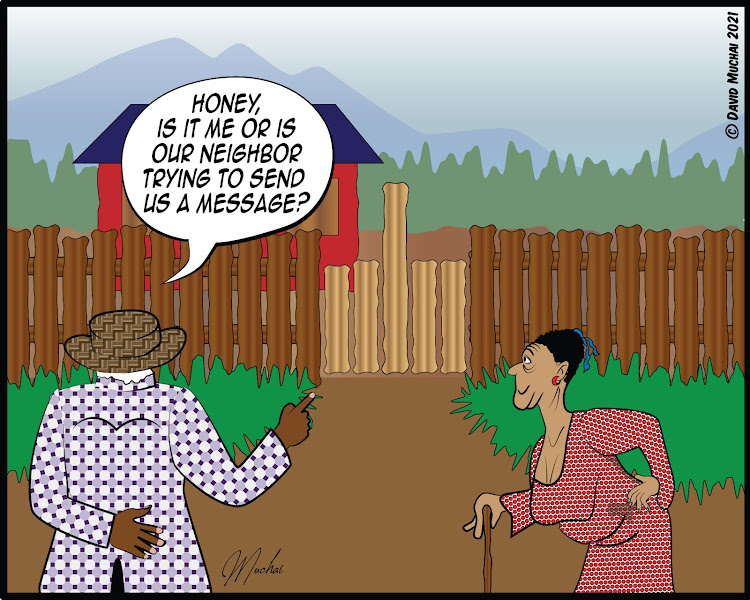 Even with the advent of social media, in Jiji Ndogo, word still circulates through a more primitive means called gossip.

The chief resident monger is a woman called Gwendoline Nyaguthii. Gwendoline is fully equipped for the job. She talks a mile a minute, knows more about every resident than any normal human should, and she loves tea.

And not the metaphor for gossip; the kind that’s brewed with tea leaves and water with, “Only three spoonfuls of sugar, please, dear.”

“We don’t make or serve tea at the Police Post, Gwendoline,” I say when she pays me a visit. “What can I do for you?”

“That’s no way to welcome a guest. I just thought…”

“What sort of policeman are you? Two years and you’ve never found my goat.”

“I’m afraid not all cases get solved.”

“I know who the thief is around here.”

She looks around furtively, talks in low tones. “I hear people have been smelling chicken at the Mayangas’ house.”

“But there haven’t been any feathers in their trash pit. You know who slaughters chicken and hides the feathers? A thief.”

“You want me to arrest Mr Mayanga for not displaying chicken feathers?”

“At the same time that chicken was smelling at the Mayangas’, there was wailing and screaming at the Mbogotas’. Why, you ask?”

“Because their chicken was missing. And not just any chicken, Gwendo.”

“They name their chicken?”

“Actually, the full name is Gwendoline. After me.” She smiles proudly.

“Why would anyone name a chicken after you?”

“Something about it getting out of its coop and wandering around the neighbourhood. It’s not important. What’s important is, you need to take this issue seriously.”

“There’s not enough evidence to warrant investigation. And even if there is an ounce of truth to your allegations, maybe it’s just mere coincidence.”

“Before this, last time the Mayangas cooked chicken, the Ondieki household went a hen short. Once is a coincidence, Sgt Makini, twice is absolute thievery.”

Dear reader, I know what you’re wondering by now. Why would I entertain this kind of drivel at the Police Post?

Well, because this is Jiji Ndogo. The last case I arbitrated was between two neighbours. One of them had erected a fence and broken his saw in the process of fixing his gate.

It just so happened that his gate comprised five wooden planks, and breaking his saw left the middle plank sticking out.

“We live right across the street,” said the offended neighbour. “He’s basically giving us the finger.”

“I broke my saw,” insisted the inept carpenter. “That’s all it was.”

“Who starts cutting on both sides of a gate, huh? If your saw broke on the fifth plank, it should’ve been the last one, not the middle one.”

At this very juncture, the carpenter gave his neighbour the actual middle finger. “There. If I wanted to give you the finger, that’s what I’d do.”

“You see that?” The offended neighbour puffed. “Shouldn’t you arrest him for that?”

Presently, Gwendoline snaps her fingers in my face. “Are you listening, Sergeant?”

“Thievery, you said? I’m afraid we’ll need more than that to form a case.”

“Is that so?” She squints as if reading my mind. “That case you had the other day, who was building the fence?”

It comes to me, and my jaw drops. “What are you trying to say?”

“It was Mayanga, right? Giving the middle finger to Ondieki. I wonder why?”