Detective work is getting lonelier by the day for Sgt Makini 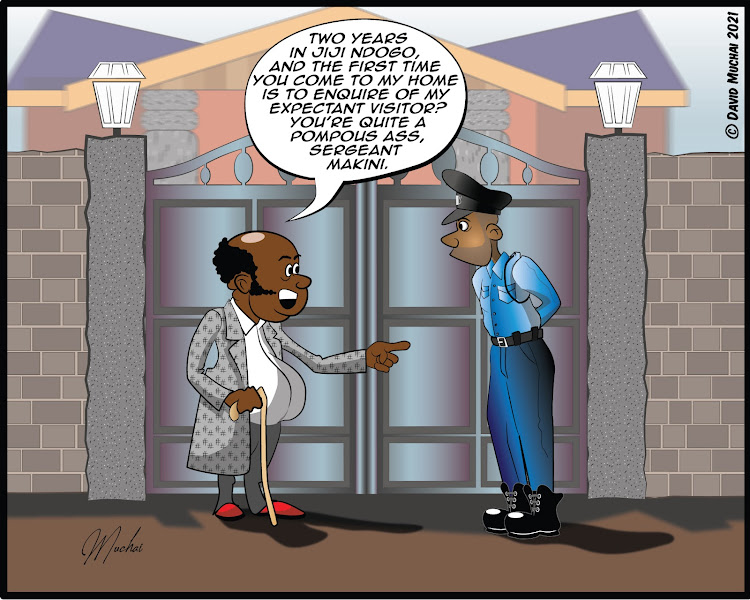 Someone left a baby at the dumpster in Jiji Ndogo, and no one seems to know whom. I sit at the Police Post, wondering how something this awful could happen in a small village like ours.

Still harbouring a little trust in humanity, I paste handwritten notes on trees and poles and outside the shops, asking for any information on any recently pregnant women who aren’t so anymore.

I pick up hopefully when the police line rings.

“Denno, how many times do I have to tell you I’m Sergeant Makini?”

“Ever heard of an invention called Caller ID? Do you have any information on this case or not?”

Apparently, he’s only interested in the nonexistent reward. Similar calls pour in, but none produce any viable leads.

Remembering I have Sgt Sophia’s package, I call her. Thrice, my calls go unanswered. Truly, my colleague is done with the police force, Jiji Ndogo and my heart.

As if that isn’t bad enough, the first of the bad news comes a little after noon. Initially, I’m excited to receive a call from my boss, Inspector Tembo.

“How’re you doing, son?” he bellows in a jubilant voice.

“It’s quiet on the front, sir. Maybe too quiet.”

“Have you heard from Sophia? She hasn’t talked to me since you all left after my wife’s funeral. Am I a bad father?”

“I don’t think so, sir. You only just found out she’s your daughter. You haven’t had a chance to be her father.”

“I mean, because I’ll be leaving soon for America with my sister-in-law.”

I almost swallow my tongue. “You are? When? Why?”

“I extended my bereavement leave and Sheniqua invited me to visit Atlantis.”

“I can’t wait to visit the Statue of Liberty.”

“Who cares? They’re all in America, no?”

In one fell swoop, everyone is abandoning me. I want to be happy for Inspector Tembo, but loneliness has a way of numbing a man’s heart. A promising lead comes in the way of a seemingly pregnant visitor to Sonko’s house. He’s the richest man in Jiji Ndogo, owns the only solar panels within a 50km radius.

He also has a bad temper. “Two years in Jiji Ndogo, and the first time you come to my home is to enquire of my expectant visitor? You’re quite a pompous ass, Sgt Makini.”

I promise to return with a warrant if I don’t get the information I seek, which turns out to be unnecessary. Sonko’s niece is as pregnant as they come. I head back to the Police Post, my heart heavy with disappointment.

Before I step out of the stifling heat and into the clammy humidity of the office, the official phone rings.

“Afande!” I salute the Regional Police Commander in Kericho.

“Sergeant, we have a break in your abandoned baby case.”

“Two culprits arrested in Kericho town. One has confessed to kidnapping the child.”

“That’s good news. But how did the infant end up in Jiji Ndogo?”

“It was as good a place as any, I guess. They needed a place to dump the evidence after their client declined to take a girl.”

“Client? They were gonna sell the baby?”

“I’ll send a vehicle to get the child to a proper orphanage.”

“Orphanage? What about his mother?”

“She didn’t survive the ordeal, Sergeant. Hard to, when a baby is cut right out of your stomach.”