Jailed for laughing too hard in court 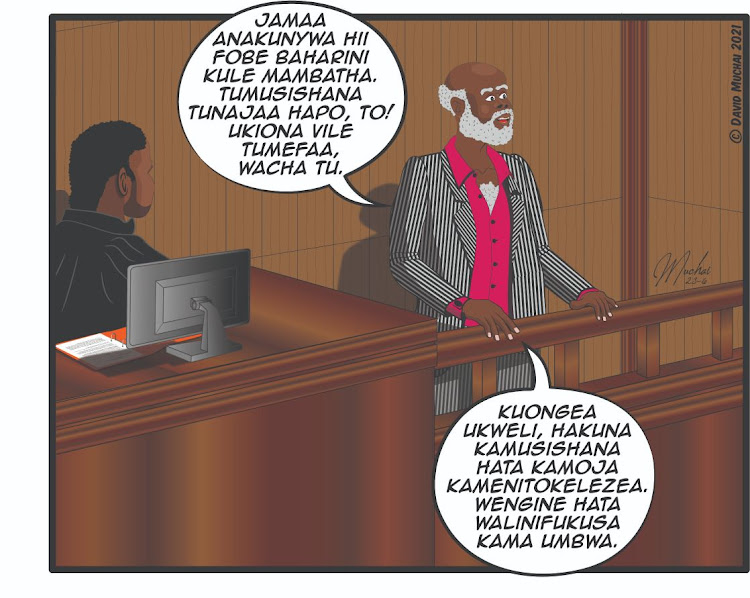 With Kimondo’s plea hearing up in Kericho, I go there to support my sister. Sgt Sophia comes along.

Before Kimondo’s case is called, we have to sit through another trial. Little do I know I’ll end up in jail because of a man called Justus. It starts the minute his name is called.

She shushes me and listens intently.

“Justus Ayam is suing Snake Oil Breweries for false advertising,” says the clerk. “The plaintiff is in court in person. Snake Oil is represented by their salesman — I mean their lawyer.”

I laugh out loud, but half the courtroom laughs along. So, I don’t raise attention.

The judge asks, “Do we have an interpreter in court?”

“I’m here, your honor.” The interpreter whispers to Justus and the plaintiff whispers back. “He says the ad is on a beach in Mombasa.”

“The women dance and caress the man, your honour.”

“And they sit on his thighs.”

“He goes into a tent with one of the women.”

I burst out laughing.

“Order in court.” The judge raps his gavel. “Anyone else who laughs will be held in contempt of court. So, Mr Ayam, what’s your complaint?”

“He doesn’t get women,” the interpreter says, “no matter where he drinks. Some even chase the poor man like a dog.”

“Even his wife is not falling for it.”

By now I’m laughing so hard I forget where I am and shout, “Hata mimi sijawahi pata!”

Judge brings down the gavel again. “That’s it. You are in contempt. Officer, take him to the cell.”

I stand up. “I’m sorry, your honour. I have a case coming up. I won’t laugh again. I promise.”

“You will be taken to the cell after your case. Counsel for the defence, what do you have to say?”

“Your honour,” says the advocate, “it’s true my client has such an ad on television, but the plaintiff does not meet even one criterion to disprove it. He’s never drunk on a beach, he’s not as handsome as the model, and he hasn’t proved he’s taken Sh10,000 worth of my client’s alcohol.”