When a math test is illegal 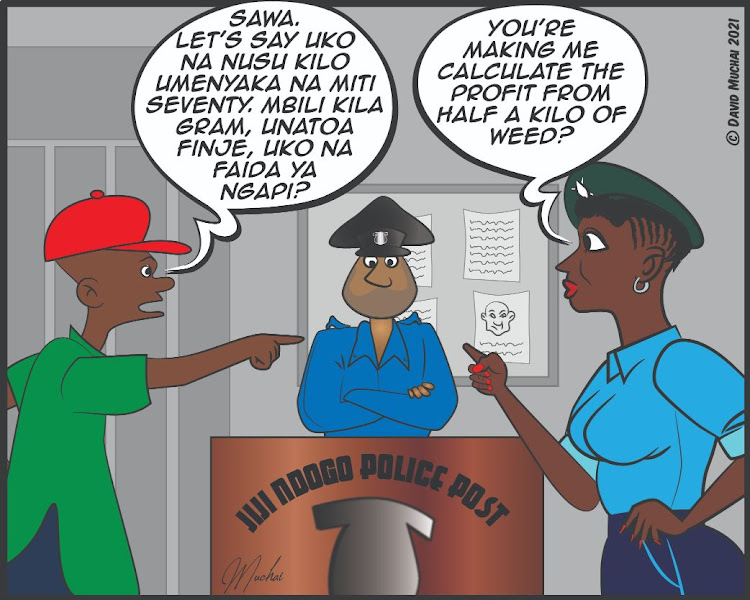 Jiji Ndogo Police Post can get a little slow. If no one is looking for their stolen chicken, or someone’s dog hasn’t been munching on a neighbour’s maize, we tend to spend a lot of time watching the shadows move. So when my mother calls me out of nowhere, it’s double joy for me.

“Have you met someone yet?”

“You know what I mean, son. Every mother wants to see her grandkids.”

“My sister, Kanini, she has lots of those, mum.”

“What about that police lady you were telling me about, huh?”

“Bye, mum. Thanks for calling.”

When I hung up, Sergeant Sophia is throwing eye daggers at me.

“What police lady was your mother talking about?” she asks.

“Um… She works in Kericho. She’s an inspector.”

Luckily, Kevo walks in and saves me from having to make up more lies. His eyes are bloodshot and he looks like he is ready to kill someone.

Sophia looks at me.

“What’s he talking about?” she asks.

“He means someone broke into his house.” I turn to Kevo. “Nani?”

“Some of us stayed in school,” Sophia says.

“Try me,” Sophia dares him.

“What kinda math is that?” I ask Kevo. “Nusu kilo umenyaka na 70k? Nothing costs that much. Kwani ni gold?”

Sophia shoots Kevo a look I know all too well. A look she reserves for suspects. “What did you say your name was?”

Kevo smiles, licks his lips, and nods his head suggestively at her.

“Sgt Sophia is my name. You came to report something about someone breaking into your house?”

“I’m sorry they did you wrong. I believe your merchandise was stolen, right?”

Kevo turns to me.

“He says you’re repeating yourself,” I tell Sophia.

“I’m sorry.” She grabs Kevo’s hand. “Come with me. We have some stuff we recovered yesterday. It’s in here. See if you can pick out yours if it’s there.”

I’m totally baffled as I watch Sophia lead Kevo into a cell, but once there, Kevo realises there is nothing.

“What are you doing?” I ask Sophia. “He’s a complainant. Wait! Is it because he looks high? We can’t even prove he’s on drugs or anything.”

“Kevo, what was stolen in your house?” Sophia asks.

I look at Sophia, amazed.

“Someone stole his drugs? How did you know?”

“He made me calculate the profit from half a kilo of weed.”