Foi Wambui in radiant seriousness on Crime and Justice episode 2

• Actors like Foi Wambui are taking their rightful place in an industry that, for a long time, has been accused of not being accommodating enough to new faces and young talents.

• At only 23, the usually vibrant actress carries the weight of the world and an uncertain justice system on her shoulders as she fights for her freedom in “Primal”, the second episode of Crime and Justice. 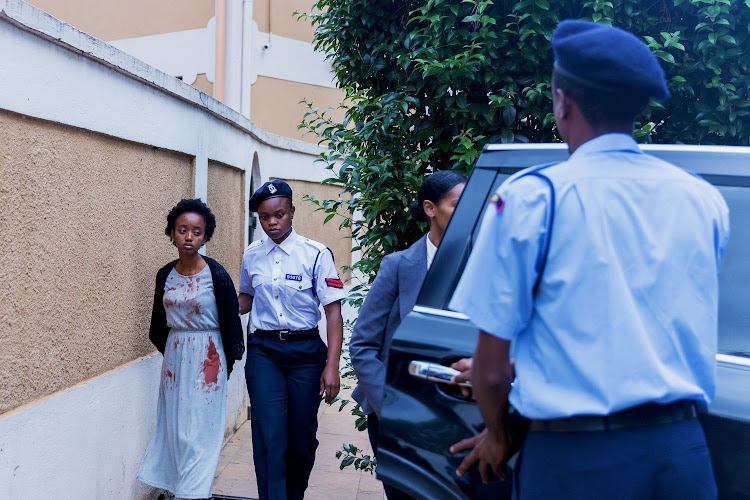 Rehema (Foi Wambui) is led away by the police from the crime scene.
Image: SHOWMAX

The Kenyan film industry is ripe for young actors who are proving that they have what it takes.

Actors like Foi Wambui are taking their rightful place in an industry that, for a long time, has been accused of not accommodating enough to new faces and young talents.

But with more opportunities for actors, Foi admits that the tide is turning

“There is a lot of great talent, and now more than ever, there are more opportunities for both young, emerging actors and those who’ve been in the industry for long. The industry is welcoming, but only the disciplined young actors will survive and thrive,” she says.

At only 23, the usually vibrant actress carries the weight of the world and an uncertain justice system on her shoulders as she fights for her freedom in “Primal”, the second episode of Crime and Justice.

“It’s exciting to bring these young actors on board to a project of this magnitude. There are more coming, some who have never even been seen on any mainstream platform,” says Lorella. “This is a great opportunity for them to showcase their skills and to grow alongside other great talents who’ve been in the industry longer. And we need them even beyond Crime and Justice as we look to more content in the future.”

Foi’s character Rehema is a 17-year-old who is accused of killing her father by stabbing him eight times, a chilling opener that may as well have been taken out of a true-crime murder story.

It’s a very intense episode, and one Foi carries with the gravity it deserves. It means a lot to her to be able to tell Rehema’s story. “I feel honoured to be able to stand in this gap and express on-screen what so many have felt. Rehema is a representation of so many women, and I hope that anyone who watches this episode will feel seen and heard and that it heals people.”

Foi has played a number of roles in her young acting career. In 2020, she played the funny friend and hype woman in Nick Mutuma’s coming-of-age romcom, Sincerely Daisy, a role that earned her a Kalasha win for Best Supporting Actress. She’s also starred in the Kalasha-winning short Morning After, as well Uhuru, another short which she also produced. Currently, she stars in Maisha Magic’s comedy Anda Kava, alongside Njugush and Abel Mutua.

All these past roles have had some degree of liveliness, none of them nowhere near what the role of Rehema demands of her. It feels great to take a more serious role, she says. “As an actor, diversity is important. I’m glad that people get a chance to see me in a different light with this role.”

To prepare for the role, she had to meditate a lot to have a deeper connection with Rehema. “I did a lot of meditation so that I could be more present mentally to really feel the emotions. I also drew a lot of motivation from my personal life.”

In doing so, Foi says it became easier for her to express Rehema’s pain and to cry on cue. It’s this sincerity with which she captures her character’s pain that has been praised by co-star Alfred Munyua (Silas). Singling out the second episode as his favourite in the eight-part series, Alfred says, “Foi is definitely a force that’s going to take over the industry if we do right by her.”

When Showmax released the Crime and Justice trailer a week ago, Foi’s brief yet heart-breaking scene caused a stir. In it, her character Rehema laments to Makena (Sarah Hassan): “We are women in the land of men.”

She reveals that the snippet caused a lot of curiosity from her family, and especially her parents who are excited to watch her in action. “My dad has been asking about it since the trailer came out. I can’t wait for them to watch it.”