A woman’s work is never done

Crushes are causing havoc in the lives of Jiji Ndogo's police 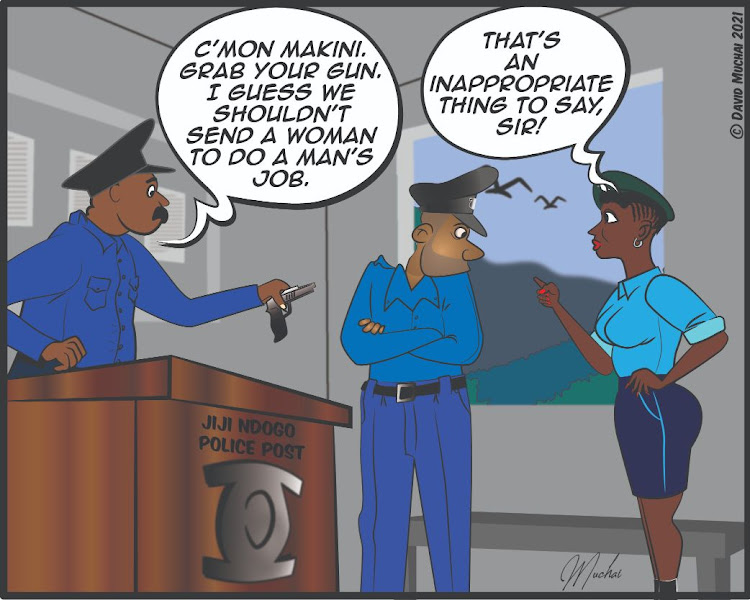 Back in Jiji Ndogo, I sit in my small apartment a troubled man. My recent visit to my home village has troubled me more than I’m willing to admit. After ample deliberation, I write a letter and head to the police post.

“Oh, Makini, thank God you’re here.” Inspector Tembo looks like a haunted man. “The Dragon is mad at me and I don’t know what I did.”

“I thought your wife is Pumkin now, not the Dragon.”

“A pumpkin doesn’t breathe fire from the nostrils, my friend. I’ve eaten dry githeri three nights in a row. Sometimes I don’t know if I’m crushing the maize or my own teeth.”

“You must have done something pretty bad, sir.”

“We’re watching a movie, right? Then she says, ‘Let’s play a game. Here’s a piece of paper. If allowed, write down three people you’d like to sleep with outside our marriage.’ She wrote Denzel Washington, Tom Cruise and Danny Glover.”

“Bertha the midwife, my neighbour’s wife and Fatma Nono, the owner of Kula Ulipe hotel.”

“No wonder she’s pissed, Inspector. All those people live in Jiji Ndogo!”

“So? She’s been messing with me since we met. I guess a woman’s work is never done.” He turns serious. “Why are you here anyway. You still have three days to stay home.”

Tembo had suspended me for a week for misusing public resources to frustrate Sophia’s date with Chief’s son. I hand him the letter.

“My resignation. I gotta do something and I can’t do it in uniform.”

“Find Kimondo. He raped my sister five years ago.”

“Inspector, I need assistance,” Sophia says from the door. “I ran into a chang’aa den and I can’t arrest the men.”

“Too many of them?” Tembo asks.

“No. They keep laughing and won’t take me seriously.”

“What am I supposed to do — shoot them for drinking chang’aa?” Sophia’s face drops. “Actually, they dared me to, but I couldn't do it.”

“No wonder they say a woman’s work is never done,” Tembo says.

“This isn't the proper scenario for that saying, sir,” Sophia says.

“C’mon, Makini. Grab your gun. I guess we shouldn’t send a woman to do a man’s job.”

“That’s also an inappropriate thing to say, sir,” she complains.

“You see what I’m going through, Makini? To a woman, nothing a man says is correct.”

“What about my resignation? And the suspension?”

“I want you to follow protocol, not quit. What sorta man doesn’t stand up for what he wants?”

“Are you talking about my job, or about me wanting you?”

Sophia smiles and walks out.

“See? That’s what women do, son. They get in your head and mess with you from the moment you discover they wear ‘panties’ and not underwear, until the day you die. And that’s why I say a woman’s work is never done.”

“I think you’re still using the maxim wrongly, sir. And panties are underwear, too.”

Tembo shakes his head, thrusts my gun into my hand.

“She’s right. You’re a useless slob, but don’t let her twist you. We gotta stick together, Sergeant. That’s why you can’t resign.”

After we bring in the drunkards, Sophia presses upon Inspector Tembo that I must complete my suspension. Now I’m more confused than ever.

What to do if you have been raped
by David Muchai LLB Writer, Author & Content Creator at XLNC Media Inc
Entertainment
28 February 2021 - 06:00