Letter from the children of famine to leaders

What is the meaning of a nation whose children die young not out of war or terrorism but hunger and thirst? 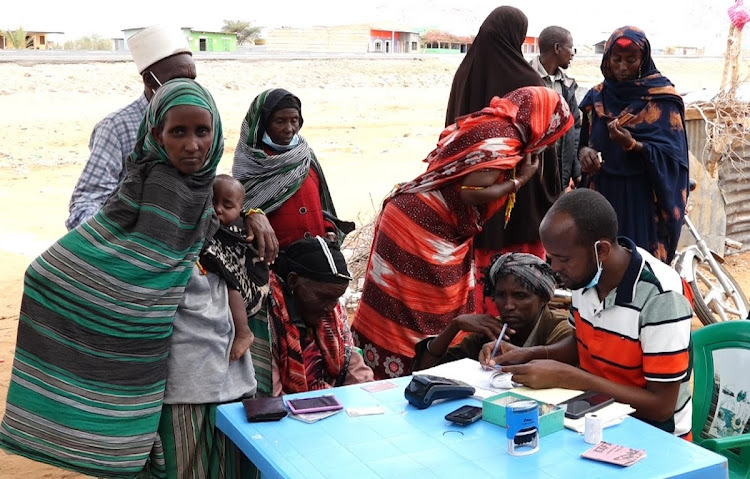 A woman and her child wait to get cash from the Hunger and Safety Net programme being implemented by National Drought Management Authority at Turbi in Marsabit.
Image: ALPHONCE GARI

On each 17th of October, the world takes a moment to observe the International Day for the Eradication of Poverty. The day also marks the adoption of the Convention on the Rights of the Child in 1989.

This UNCRC treaty is supposed to protect all world children until the age of 18. Most countries of the world agree about this, including those of lands currently assailed by famine and drought across the greater Horn of Africa.

Eastern Africa is witnessing a catastrophe born of natural calamity but exacerbated by lack of sustainable initiatives, too. Scholars both local and foreign have warned of the deteriorating patterns here occasioned by major climatic changes. They saw this famine coming.

Yet unperturbed, the region, Kenya included, approached the matter by the same path of predictability.

First, the failed rains, yet rain is life. Secondly came the media blackout and government attempts to downplay the matter. Third came steady death and steady media focus. Then governments woke up with stop-gap measures. By then, these long queues of death had arrived.

Today, the situation is a national disaster, swiftly declared so, and international media cameras are here. National governments and national media now train their attention to the scenes of death. The ire and attention of the countries are now attracted to this sorry state thanks to prime-time news.

Remember the photographic stories from ground sites that similar are even when geographically they lay apart? Recall dry red soil sifting through parted manicured fingers of a journalist in jeans out in the field, her counterparts wearing shock on faces back in studio. Live news of lives lost to thirst and hunger.

This pattern plays itself from one land to the next, each facing the same situation in more or less similar ways as described clearly above. Has this story changed much since 1989?

Never ever forget the role played by the child characters of these stories.

Remember the face and voice of that child in the maelstrom of a massive famine now turned into the prick that pierces the ethical and moral consciousness of all and sundry? Is Death a visitor wearing masks of children?

The UNCRC has four core pillars. Firstly is the principle of non-discrimination. No child anywhere on earth deserves discrimination in any form, including the children of these lands of starvation.

A piece of mankind falls off and dies each time the media broadcasts a report of a specific child. Paint in your mind that nameless toddler whose immobile mother perished out of endless thirst, or a collapsed digestive system, yet still stays stuck to her with lips locked on a nipple as cold as a grave.

Why should any leader wish to be the author of this scene in a narrative that is so recursive, it has established a design, a pattern, over the decades, which is adopted yearly like a template of aesthetics?

Why should anyone want to be elected in charge of the fate of such a child without wanting to put an end to the sadness of this story by doing all that can give life to this offspring of discrimination?

The second UNCRC pillar is based on devotion to the best interest of the child as a principle. Kenyans, not just from counties affected by the unfolding famine to the North and the East, but all Kenyans of sound mind, should feel the plight of the child of these areas.

How can it be that in some counties of the same nation, rain and food exist in abundance and in others, the same are absent, yet the areas where fate has dealt a smile treat the news from the ill-fated zones as just newstime items?

There is an adage in Africa that says it is better to meet at a time of peace rather than at a time of calamity. It does not need a national disaster to awaken our sense of patriotism and nationhood.

The famous Kenyan unity that arises with spontaneity on the throes of a terror attacks should be evident even at times of natural catastrophe.

Those who make policy and those who put them into practice, from county to country levels of decision-making, should centralise the children when it comes to finding sustainable solutions to a perennial problem like our droughts.

The third pillar talks clearly about the right to life, survival and development. As our new government unfolds its work plans for five years, let it centralise the fate of Kenyan children of drought zones, whose terror attack arrives from dead clouds above them.

The final pillar of the UNCRC is clearest. Respect the views of children. Imagine that you are the audience of the child stuck to the tit of a dead mother in a manyatta of death. Surrounded you both are by the stench of dead livestock and the rays of a rainless sky, listen to the eloquence of silence in its accusing eyes. Act.