Parable of roots, herbs and a woman with a vote 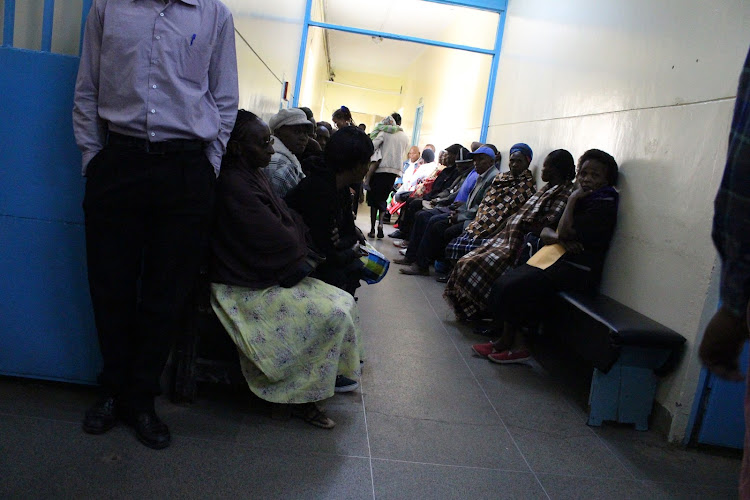 Patients wait to be treated at a hospital
Image: FILE

The Woman. The beauty of hospitals and the squeaking doors of elevated cleanliest of floors. There are TVs that speak silence in black quietude. They mirror the poise of lines of those seeking Hippocractic consultations.

There are scents of laboratory liquids that permeate the nostrils of those here. Their fragrance reminds of the blatant misuse of noses of all shapes. There are these all, like lines of queues of who is who in the medical almanac of tropical maladies. And then there is the woman. Sure.

She sits next to him, picking tweets on the slender tool she uses for personal communication. A Samsung. She sits picking blogged snippets that fell as narratives from YouTube campaign adverts of a president-to-be. Or two.

She sits with legs so folded, arms twitching at tricepular angles, instigating bravery into her fine soul of steel. Courage.

She sits in ragged jeans, occupying the cold leather of rainy Thursday. Moist like fog of July now occupies her bespectacled eyes, with invisible alphabets of reggae and Kingston, Jamaica. Hallelujah….

She sits with her elbow dancing on the cages of the ribs. Of the man next to her. Who winces influenza like the wheeze off the thorax of her man minus his inhaler. Abomination.

She sits and eats off the oxygen of here, her aquiline nostrils imitating tall General Kagame's when he smells the whispers of bloody rebellions in Bukavu while conducting yoga. Twitches.

He reads his old newspaper of choice and its new obituaries. Sailing with sadness into the catatonic miasma that is convalescence. Redemption. Christ shall suffer like poetic stanzas in the fidgety fingers of Lesego Rampolokeng of Azania down South, when both are invoked in tandem like two in the tango of Congolese lingala. C'est oui!

They shall sit like that for whiles of million pentaseconds, quaking the hours of their unspoken pain into the agenda of the medical man. Healing. Next shall beget next. They shall plait cornrows of next, next and next buttocks, wiping waiting benches. Patience.

Leaves of Woman. The tea pot. The scent of brewed tea leaves and other herbs lingers on. It wafts through the trout of the stainless steel kettle in spirals of shimmering and disappearing grey. The scent is powerful.

It invades the nose with strength, pushing away oxygen to take charge. The sugar granules resemble pieces of a full moon ground to a fine powder of mirror-like nature. In each granule hides the taste of times once sweet and lingering. Each granule is a shard of truth that got lost in the void of ideologies.

Times now sitting away like the clock that hangs above the woman. Its hands stuck in a time once gone and now still is. Still, the clock tick-tocks a sound set in its hidden parts even as the hands of seconds and minutes stay still, caught between lack of energy and the dust of gathered months.

The plate is made in China. It has embroidery both elegant and elaborate. Exquisite to the eye, this floral alphabet that attenuates situations like this one that are both incredible and indescribable. The pellets of powerful painkillers place themselves at the distance between the untouched breakfast and the woman.

A mock referee. An arbiter of bittersweet phenomenon. An occurrence of hospice nature so harrowing in its simple emplacement that ample is its lack of communication of hope. The woman fidgets to the left.

She holds out to the fingers of air and clasps a fistful of determination. She takes this and rubs it on the place where the pain intense-most is.

Things will look brighter once the sun of the skies breaks the virginity of this dour day. The morning that clothes itself in attires of frost, shouting seriously though split window panes like a thousand shaitans.

That morning, where a mourn emanates from the distant building by the gate. A lost one on the last road to the belly of the earth in a hearse full of misery.

A moan escapes through the unquiet walls of the next room, where a child of steep Kwashiokor, lies.

In this midst of the very nature of life,

as a question mark.

The woman nibs the bread…. She believes now, quite strongly, like a wayfarer travelling the line of a spiral of thoughts, that roots is both reggae but also a party… here in Kenya. 2022.