Most schools focus on syllabus instead, Star survey found 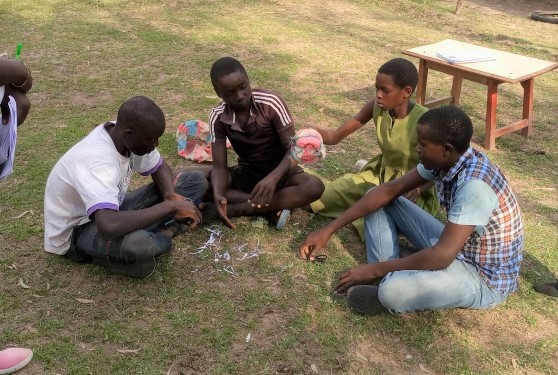 Brian Otieno engages his colleagues at their home in Kasik, Kisumu county, during a fieldwork assessment where they were asked to make a ball.
Image: LAURA SHATUMA

The new education system seeks to empower children holistically to fit the dynamics and changing trends of the world.

However, some key accomplishments are being left out in the quest to bring up competent learners.

The Star conducted a spot check in a few schools, which revealed that life skills lessons are skipped in most schools.

Some of them showcase their talents during the life skills lessons, while others hold class meetings with the teachers.

“Class teachers come and meet students to address issues affecting them and at times we discuss performance,” a teacher from Kakamega county said.

Life skills, which is also a subject in the Competency-Based Curriculum, has not been given much focus.

“We don’t really take a keen interest, especially for students who are in the 8-4-4 system, because we are busy working on the syllabus,” another teacher from Narok said.

Parents have an uphill task of instilling life skills and values in their children with the help of teachers, an expert said.

Zizi Afrique executive director John Mugo said more awareness should be created on the role of parents and teachers.

This is because parents will help build a strong foundation for the children in understanding their values.

“For a teacher, if you will use shouting as your problem-solving skill, then that’s what children will adopt,” Mugo said.

The research assessment by Zizi Afrqiue found that most parents are not aware of their role in life skills.

On communication and collaboration, Mugo said parents should involve their children in some of the activities they do at home.

For instance, a father constructing a structure within the home compound should involve his son.

This, he said, will help the learner understand well communication and collaboration.

The findings also found that children in rural areas have better communication and collaboration skills compared to those from the urban setting.

This is attributed to confined home settings in the urban areas.

PUT TO THE TEST

This is despite her family residing in a far-flung area with little access to technology.

During the assessment in Kisumu, four learners from four different households were asked to make a book and a ball.

Two of the learners would occasionally ask for a pair of scissors or sellotape from each other.

One student was silent the whole time. She would just whisper and use signs while taking scissors from the other’s hands.

The fourth student finished first making the ball and presented it to the teacher, Emily Outa.

The students were not privy to what the teachers were testing.

“What I can say from this test is that two of the kids have good communication skills while one has good collaboration,” Outa said.

Outa, who is among teachers upgrading their courses to CBC, said the assessment accorded her a clearer understanding of CBC.

The students were assessed based on their interaction at home with their parents and siblings.

Most parents said their contribution to problem-solving ends when there is conflict, while they termed respect as ‘paramount’.

Brian Otieno from Kasik in Kisumu county is expected to join Form 1 in May.

Otieno was assessed with learners in the CBC system at their homes.

He gave the disparity between his outcome and that of his other colleagues.

Given a chance, Otieno would go back and join the CBC lot because he says he feels the core competencies are well outlined in CBC.

“In our school, we never used to have life skills classes, but I hear in junior secondary, it’s a compulsory subject,” Otieno said.

However, Outa had a challenge with assessing self-awareness among the teenagers.

"If you just call them adolescents, they will either run away or get mad for using that name," Outa said.

At Borabu TTC, teachers taking part in the assessment were still being trained.

They were trained on getting consent from parents and how to mark the feedback they would receive from learners.

According to the Basic Education and Curriculum Framework, there are seven core competencies that are to be achieved by every learner.

Among them are self-efficacy, problem-solving, communication and collaboration, which were assessed among teenagers in three counties.

The research was conducted in Nyamira, Kisumu and Narok among teenagers aged 13 to 17 years.

Kenya National Bureau of Statistics generated 20 villages in every county with homes that had adolescents.