Stories of elephants and demise of Wilbur Smith 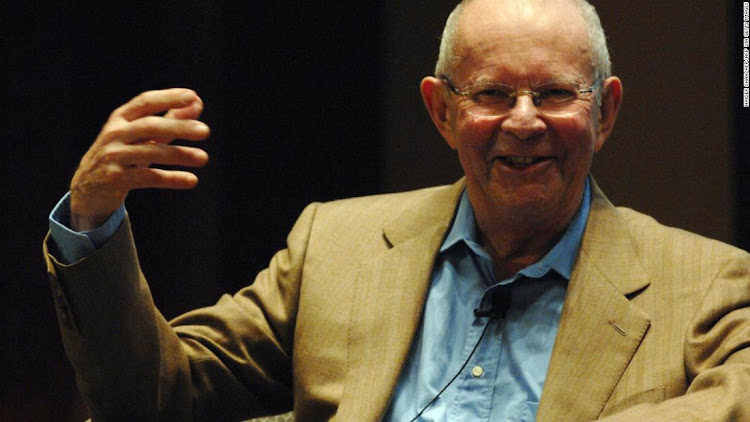 The elephant is the symbol of Kenya’s famous beer export to the rest of the world: Tusker. It is a favourite animal in Kenya and is one of the Big Five animals that Kenyans love to show the rest of the world as part of their natural heritage as a global tourist destination.

The elephant appears as one of the iconographies on the highest form of money in Kenya. The Sh1,000 note has a mighty elephant head, staring at the feet of Jomo Kenyatta, the founding father of Kenya, as he sits on a throne of stone facing his own mausoleum at the Kenyan Parliament.

It is said that this old president had a soft spot for elephants. Legend has it that his soul was divided between two bodies, his own and that of a mighty bull elephant called Ahmed.

This elephant was born in 1919 and lived near Marsabit town, where I once fell in love. So long and extraordinary were its tusks that this unique animal was called “Bwana Tembo”, just as Jomo was called “Mzee Kenyatta”.

Today, you can find the skeletal remains of Bwana Tembo in the world-famous Great Hall of Mammals at the National Museum of Kenya.

Before his death, Ahmed had been placed under a 24-hour armed guard against poachers by a presidential decree issued by his soulmate President Jomo Kenyatta in 1970. Ahmed died peacefully four years later and Kenyatta would die four years after him in 1978, peacefully, too.

Tellingly of where elephants in Africa live, writings of eastern and southern Africa have mentioned these bulky animals prominently for over 200 years. The travelogues of the 19th Century explorers are littered with mention of these animals and their genocide in the context of slave and ivory trade.

M Stanley’s books are replete with accounts of the East African slavery and ivory trade. He talks of the great herds he came across the savannahs of here and their bleak fate at the hands of ivory-seekers and slave hunters of that age.

Truly of that age, elephants are central building units in the plots of the life testimonies of 19th Century Arab slavers like Hemed bin Mohammed el Murjebi, also known as Tippu Tippu, and Swahili accounts of ex-slaves such as James Mbotela’s Uhuru wa Watumwa (1934).

The 2021 Nobel laureate Abdulrazak Gurnah’s famous book, Paradise (1994), which was short-listed for the Booker Prize of that year, is based on the Berlin Conference of 1884-85, a trade caravan from the old Swahili coast forcibly penetrating the thick bushy depths of the innocent hinterlands of East Africa as a long, male-only column in search of ivory.

For me, this nexus between elephants and literatures of Africa is more personal. The weeks I spent recovering from the wound of my initiation in 1992 were full of oral and written literatures. The oral accounts came from the old, who spoke to me words that have formed my masculinity and adult identity.

The written books were several and of diverse topics, including one by Chinua Achebe you have all read. A Time to Die (1989) is one special book I read also at this time of my potentially deadly, second rite of passage. This beautiful novel is by a Zambia-born, South Africa-based master novelist known as Wilbur Smith.

The 400 pages-plus novel is set in Africa’s vast and lush grasslands of the South at a time when the liberation struggles were at their climax in the famous frontline states of southern African country.

The book is many things in one, held together by the superglue of suspense. It is typical of the internationally best-selling novels by Wilbur Smith that made him a household name of African popular literature for decades.

In it, one finds a love story, an orange setting sun, guns and action, the famed acacia silhouetted over the sky and an old bull elephant called Tukutela. The main character and his friends seek to hunt this bull down. Mini-plots of a raging civil war in Mozambique brings the story home.

I would emerge from my weeks of isolation and circumcision convalescence with the name Tukutela forever etched in my mind. In that elephant forged by Smith, I felt my spirit of childhood grow into one of a Kenyan man.

My new soul of manhood I secretly nicknamed Tukutela. As the elephant is the totem of the Bukusu folk to whom I belong by ethnic identification, I, as a brand new Bukusu man in 1992, chose as my soul totem this fictional Tukutela to this very day.

It is with great personal sadness, therefore, that I report to you today that the author Wilbur Smith is no more. The writer who penned a book about a big bull elephant called Tukutela, a bull whose name is the name of my own soul, died on Saturday November 13, 2021, aged 88.

The world and Africa will remember Wilbur as a best-selling writer of historical novels set in southern Africa, who showed great acumen in storytelling and the craft of fiction. May his elephantine fame never die. Amen.