‘In Whispers We Shout’ a beautiful collabo

In this poetry book, a couple lampoons each other interchangeably 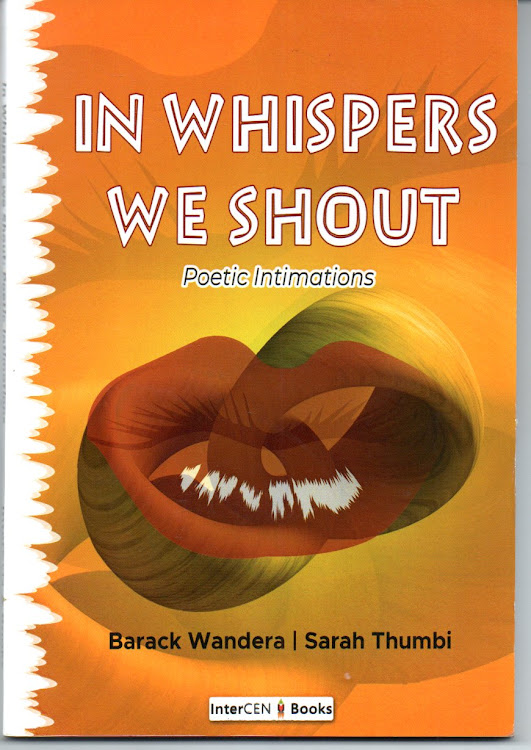 It is said that the modern Africa we live in today is a world between worlds. This could be true in a way. Modern Kenyans are children of two worlds.

The poets of Kenya who attempt to speak out of these two words ostensibly end up enacting this ambivalence. This explains why, when we read works of poetry from contemporary Kenyan writers, we feel both comfort and nostalgia. The works tend to be a celebration of the now and nostalgia of then.

In this new book, we come face to face with this existential ambivalence in a litany of poems by Barack Wandera and Sarah Thumbi. The former is a teacher in Kakamega county and the latter teaches in Kajiado county. The emblematic distance between their locations of culture announced a handshake aesthetic that copulates their creative talents.

The book is a unique experiment. It demonstrates how the folk genre of ngojera, traditionally common along the Swahili coast of East Africa, can be adapted within the perimeters of English.

The call and response format typical of African speech habits, that the personas of the poems adopt to render thoughts collected in this book, resonates poignantly with our oral cultures.

This is the first book I have read from Kenya whereby two poets collaborate to author each poem together in a most sublime fashion. The norm is to have two or more poets penning their own pieces and an anthology arises. Such an anthology can be edited by a third party or the poets themselves.

In the case of In Whispers We Shout, the two young poets combine their creative genius to produce powerful combo pieces of poesy.

This is interesting. Ngojera is a Swahili-language poetic form that is based on verbal disputations (malumbano). Two entities confront each other with choice words in a verbal duel that often hits a dramatic apogee before descending to a shivering ending of amity.

In this book, a couple lampoons each other interchangeably. They lay down their cases one by one against each other in moments of magnetic oratory. Take the first part of the book that is titled, 'Nuptial songs'.

It opens with a poem titled 'Cheating is Disrespectful' (p3.). It has 15 hilarious stanzas that alternate between a man and a woman who obviously are tied together by the umbilical cord of hot love.

The problem with hot love is famous. It singes the mind with worry and balloons the heart with wonder. In pursuit of Cupidous affiliations to each other, the bad god of doubt builds barriers without count, which the two must surmount.

The ruckus of accusations and counter-accusations, allegations and defences, captured in rhyming couplets, culminate in a conclusion of amour thus: Sweetheart tonight hold me in your arms/Let me remind you of my charms. (p10.).

When Song of Lawino was penned in the 1960s ('66, to be precise), it became a massive commercial success. It is an epic poem of lamentation and lampoon about a woman who had lost her lover to another who stood for modern lifestyle as he did. Kenyans, for one, loved the persona Lawino, and she lives to this very day as one of the iconic voices of East African poetry.

The commercial success led Okot p’Bitek to pen a sequel to this poetic masterpiece. He named it after the wayward and urbanised husband of Lawino called Ocol. Song of Ocol is okay in terms of stylistic achievement but never quite hit the high cords of the earlier book.

Unlike Ocol, Wandera and Thumbi have merged the voices of their antagonistic personas into the same book, the same poems, and this is quite a novel feat. Theirs is a consummate work that bears echoes of Songs of Solomon and love ballads of the fertile Bantu cultures of Kenya.

In other sections of the book, poems of counsel to the youth exist, too. It is for this reason that I read this work as a kind of domestic poetry. Domestic in the sense that love and its antithesis are best expressive in homes of one kind or another – be they physical or emotive or even interactive!

Here is fresh Kenyan poetry of a compound of familial beings, whose literary manifestations, though fictional, will surely resonate well with many a Kenyan reader out of familiar emotional and social imagery used flamboyantly by Wandera and Thumbi.

With a fine foreword and a luminous introduction by Egara Kabaji and John Midega respectively, eminent literary sages from Masinde Muliro and Maseno universities, this is an anthology that offers dollops of literary soups prepared to entice the palate of lovers of beautiful words.

The book is available on order from the publisher at: www.intercentbooks.com or [email protected]

Dr Makokha teaches Literature and Theatre at Kenyatta University. He is a published poet, too