Rafinki and the contours of new Kenyan poetry

• 'When We Speak: New Poetic Distillations from Kenya' came about from KU students 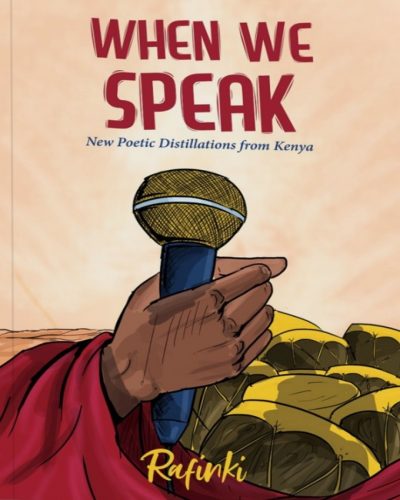 Ever heard of a group of poets called Metaphysical Poets? The term was first used over three centuries ago by the famous English literary critic Sam Johnson to describe the works of poets including John Donne, Andrew Marvell and Abraham Crowley.

These poets focused on philosophical enquiry. This animated their style and techniques, too. Their focus dwelt on matters such as the nature of reality and love.

Speaking of poetry produced by a group of poets viewed as one entity is interesting. It is common knowledge that poets of the English language come in two branches, so to speak.

Their individual works unite with that of their ilk to provide a magnitude of excellence or an orchestra of vibrating voices. The second group operate, or are perceived to, like a movement or orchestra of poets such as the metaphysical poets above.

Granted, some of these movements in poetry work with the clear knowledge of the participants doing poetry together under some sort of manifesto, clarion call or association. Yet others are classified as movements by critics and scholars.

The poetry duet of Samuel Taylor Coleridge and William Wordsworth consciously developed the movement of Romanticism in English poetry. This was in the early 19th Century after the publication of their golden anthology, Lyrical Ballads. Later eminent poets, their contemporaries, would be added to this group.

The Metaphysical Poets never wrote their works in union or unison as one collective, but rather got baptised as such by the critic Samuel Johnson.

This practice of literary critics assigning names or phrases to writers without the express permission of the latter is not foreign in Africa. Writers have been classified as feminist or Marxist by readers of their works across the contours of literary history.

In Kenya today, the desire to produce poetry for the new times and by the youth has seen the rise of a number of poetry movements, especially in Nairobi.

Since the turn of the century, several platforms have offered active spaces for poets, including Kwani? The Writers Guild, Creative Writers Association of Kenya.

Some of these groups bring together published poets with long experience in the book industry. Others are formed by a mix of both established and emergent writers. And a number exist based on university and college guilds operating under the guidance of a sage.

Rafinki poets are represented by the third cluster above. Rafinki's birth is traced back to November 2019 and replicates the philosophy that bards of the same feather, gather together. Pun intended.

They had aimed to make it a club in Kenyatta University but decided, under my counsel, to go national and attracted youth talents outside college brackets. Their choice of the neologism Rafinki was not a fluke.

The members see themselves as a group of friends (Rafiki) united by the pen (ink), hence Rafinki. I helped them find their footing by accepting to be the patron of their artistic initiatives.

The first major work was to come up with a new poetry anthology published in Kenya. Like the Lyrical Ballads of Coleridge and Wordsworth, this work was to serve as a stepping stone.

A fortnight ago, July 11, this amazing book was launched under the title: When We Speak: New Poetic Distillations from Kenya. The book is published by the fast-rising publishing house InterCEN headed by Barrack Wandera, a literary critic affiliated to Maseno University.

The colourful launch at the Aromah Restaurant in downtown Nairobi was attended by seasoned and upcoming artistes and poetry lovers from all walks of life in a well-choreographed event with strict adherence to anti-Covid-19 protocols.

Among the attendees were the celebrated poets Tony Mochama and Mufasa the Poet, who both called on more youth to show interest in poetry as a vehicle of social commentary and collective art.

Addressing the audience, Richard Oyamo, a leading light of Rafinki, pointed out the gravity of tradition and youth groups in fostering new approaches to art, activism and artivism.

Rafinki, it appears, is here to stay. Whether it will do so as a movement in Kenyan poetry or as an initiative for the advocacy of greater participation of youths in the art sector in 21st Century Kenya, only time will tell.

You can find out more about them or join them here: https://rafinki.com/

Dr Makokha teaches Literature and Theatre at Kenyatta University. He is the patron of Rafinki.