Fable of a world full of social distancing

If history is anything to go by, humans will always need each other

• Reflections from a journey to Turkana, seemingly in the middle of nowhere 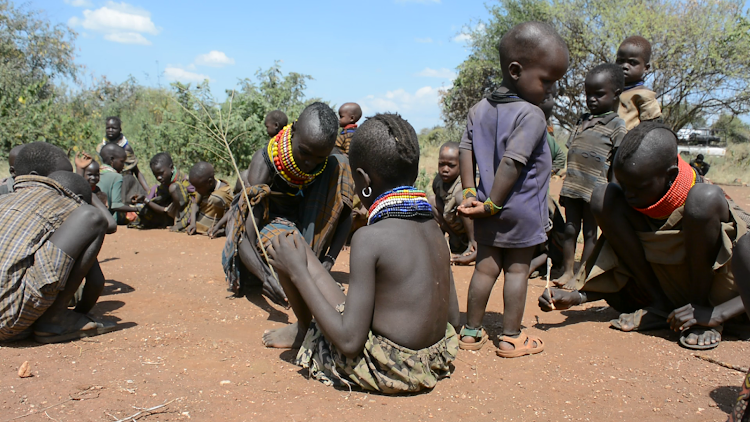 Lucy Arot teaches pupils how to write and read on soil in Turkana
Image: Hesborn Etyang

Once, I sat with a man as old as the tree at a humanless market centre of a certain village in northern Kenya. The tree still stands a century after a notorious anticolonial folk hero was strapped to it and hit severally and severely with British bullets.

His life oozed out of his mangled body, local lore says. It is said that droplets of his spirit found a new home in the gnarled body of this old tree. You close your eyes, you see it. This tree. No?

Those who sit under the tree and use its canopy as a shield from the sunrays of Kakuma praise it. A lone file of monitor lizards with hue like that of Turkana beads bypass it.

The reptiles use the sand lane beside this grotesque tree of two. Fine dust makes clouds behind their silent footfalls. They do not look in the direction of the tree.

Often, a lorry from one or two NGOs that work this wasteland drives by. It collects any humans it finds squatting under this landmark tree of ages.

It is said that when you add nightfall to being found under this tree, then it is equal to encounters with tiny devilish voices. They hover in the air like oxygen, or carbon dioxide, invisible but real.

Under this aged tree, next to a lone man punished by age and whose resilience mirrored that of the tree, I sat. He sat on his tiny masculine Turkana stool and I sat on a stone of no particular shape a metre away from him. The stoic stool carrying him is called ekichoolong.

On my laps I bore the weight of my fieldwork papers in a sun-stained khaki rucksack. On his, he bore a gun that resembled the ancient ancestors of an AK 47. Between us the social distance carried silence like a weight of sorts.

It is while sitting under this tree of memories that he spoke. First he did as if dialoguing with himself before he ventured to louden his soliloquy. With no lorry in sight yet, and my watch saying that I was here on time, I chose to be his listener.

There is no comfort like listening to another human in a vast arid land populated by hills and distances like no other. I mean it.

He spoke at first of the vast blue sky. It adorned the county below like a warrior helmet of blueness without end that hems all in infinitely. I scoured the mindboggling expanse of this luminary sheen of endless blue for a cloud, or humanity. All I could see was nothing but blue.

He spoke of a god who wanders with a stick in his teeth. It reminds all who meet him that a tooth or two must be knocked out of the lower jaw to avoid death caused by milk of sick heifers. He spat a metre of saliva out like a jet through his own godly hole.

He spoke and rested. He rested and spoke. As the sun escorted the long languorous hours from dawn towards dusk, he spoke like this. Like this, he spoke, hour in hour out, under the forlorn tree with a memory of resistance.

As we sat there, socially distanced, two humans alone under the vast canopy of heaven, we waited. Out there in a land populated by shapeless stones strewn like the hills upon miles without end, we waited. With no sign of birds in acacia or ants across particles of the dead sands, we waited.

He ended his speech abruptly, when it became clear that I was a human-like him. He peered at me out of the eaves of his forehead and asked me almost reluctantly. “How long have you been here?” he used Kiswahili to state his thought.

I picked up the bag on my lap and checked on the dust-crusted face of my wristwatch. I gathered the bag as if it contained courage. I gathered my tired bones bent in my skin and straightened up. I looked at him and I looked inside me.

The two of us were humans! It became clear that whenever the words of humans leave their mouths and minds, their recipient ought to be another human. That human communication can be meaningless in a world where only one human is alive. It is as indifferent as the vista of the vast outback of Turkana.

As the world celebrates World Population Day this weekend, two questions haunt me just like this true story from one of the counties with minimum corona rates in Kenya today.

How long have we humans been here on this earth? How long are we willing to wait for the one who will come and take us all to a better place? Or perhaps our home is this place and space among each other so that whether we are two on earth or seven billion, we need each other as humans.

Dr JKS Makokha teaches Literature and Theatre at Kenyatta University. He is also a published poet