The prolific poet is most famous for 'Kimbunga: Tungo za Visiwani'

• Where the land ended, the sea extended as a muse for his metaphors and meanings 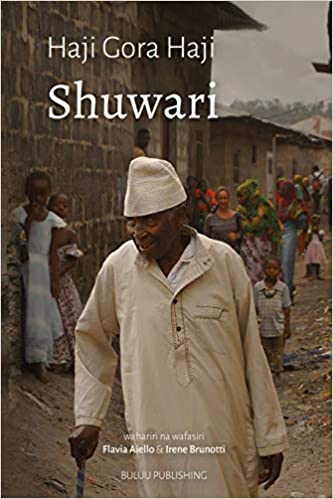 Last Friday, lovers of poetry from East Africa received with sadness bad news from Zanzibar. Curtains closed on one of the oldest and revered poets from the rich Swahili literary heritage.

Haji Gora Haji, 88, is no more. The wordsmith of the Zanzibar archipelago now rests on the laurels of his literary fame and achievements.

Haji wrote under the influence of his antique island, which has fascinated famed authors such as the Italian Marco Polo, the English John Milton and the Moroccan Ibn Battuta.

The sea that surrounds his island homeland of Tumbatu, the third-largest island of that archipelago, was his muse. Is it not the reason he was named by his peers and admirers as ‘The Old Typhoon?”

His poetic oeuvre has been translated into English and parts into German as well. His Siri ya Giningi came out in English 10 years ago but was first issued in Kiswahili in 2009. It continues to receive hefty accolades among Swahili scholars at home and abroad.

However, it is Kimbunga: Tungo za Visiwani (1994) that can be considered one of his tour de force. It was released in four editions within a decade of its first publication. In 2019, he released another literary gem titled Shuwari – a collection of performance poems. It’s videography is available here https://shuwari.home.blog/

Nine of the poems in this sterling work of art are by the maestro himself, but three are from his scion and successor Ali Haji Gora. In keeping with international changes sweeping across poetry as a genre, captions in English exist for each of the poems, the better to reach global audiences.

The history of his Swahili roots emanates from the waTumbatu folk heritage. Of both Bantu and oriental influences, the world of this poet is a demonstration of how cultural hybridity is both an aesthetic resource as well as anchorage.

His vast knowledge of the culture and society of the Swahili coast leaps off the pages of his famous poetical pieces. It is said that he composed his career as a poet in the 1950s colonial era, long before the independence of Zanzibar and its unification with Tanganyika.

This long practice of composition and recitation crisscrossed a vast range of genres of Swahili verse. Some of his pieces were epic in form and matter. Others are full of ecclesiastical wit and counsel that are worthy companions to all and sundry.

The celebrated Kenyan writer and winner of the Jomo Kenyatta Prize of Literature, Yvonne Owuor, mourned the great poet in a moving eulogy. Gripped by grief, she lamented, “One of the most luminous of our poets, the East African summoner of sea-breezes slipped away today. The national gadfly, the word alchemist has left us….”

The two go way back to 2005, when Yvonne was the executive director of the famed Zanzibar Film Festival (ZIFF). Her ongoing grief is intensified by her inability to bid him a physical tribute as the poet was buried soon after his demise in line with Islamic beliefs.

“I was not able to wish him a safe voyage home and bless and thank him for all that he was, everything he had done, every word he had breathed, every territory of our waters he had helped us reclaim by offering them a grammar of being,” Yvonne mourned.

Yet in his departure, Mzee Haji Gora Haji continues to speak through echoes across the region and beyond. Indeed, students and scholars of literature are aware of the integral and vital contributions of Swahili poets to the literary heritage of East Africa.

They recall the rich contributions in classical poetry in Kenya by luminaries such as Mwana Kupona and Muyaka bin Hajji, 19th-century poets of Lamu and Mombasa respectively. From Pate, another Swahili bastion of classical poetry, the venerated Mwengo bin Athman wrote the Epic of Tambuka in the 18th century. It was commissioned in 1728 by the ruler of that island back then.

This written gem was penned at a time that giants of European poetry like William Wordsworth of England or Friedrich Schiller of Germany had not emerged yet. Like Haji Gora and his son, Mwengo would later pass his gifts in poetry to his son Bin Mwengo, a Swahili bard of note, too.

The late verse-smith had in his life lived 360 degrees of experiences. A complete embodiment of what is nowadays called amphibian aesthetics, old Haji had tried his hand in fishing, sailing and dock-work.

Like other Swahili poets before him, the world was both terrestrial and aquatic. Where the land ended, the sea extended as a natural surface upon which he found his poetic metaphors, meanings and musings.

Those celebrating the poetic legacy and prowess of the fallen Mzee Haji Gora Haji view him in this lineage. He is a worthy successor of the old maestros of his Swahili civilisation who placed our region on the global literary atlas.

His work is the indelible footprints he leaves behind for us on the sprawling sands of Swahili literature. Scholars both local and foreign will continue studying his art, craft and wit for generations to come. Farewell, great bard, the troubadour of Tumbatu.

Dr Makokha teaches Literature and Theatre at Kenyatta University. He is a published poet, too