Karen is said to have lost her cool and almost slapped her baby daddy, Samidoh

•On the other side, Karen also shared a post after landing in Dubai.

•She said she was a big supporter of people “being exactly who they are.” 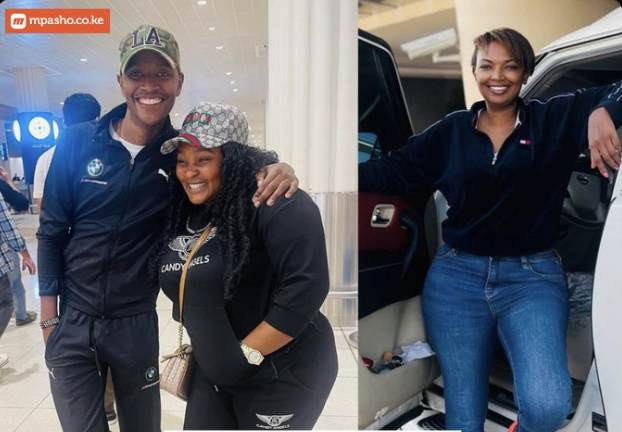 Samidoh’s last show before he returned to Kenya happened Friday night with tens of Kenyans attending the much-hyped event.

Drama started when Karen went straight to where Samidoh was seated and forcefully sat on his laps.

Edday, stood from where she was seated and went and grabbed her husband's hand even as the security guards tried to separate the two women.

A video circulating online shows Karen Nyamu and Samidoh in a confrontation. And minutes later, Karen is said to have lost her cool and almost slapped her baby daddy when his bouncers intervened.

Edday stood up and tried to grab Karen away from her husband before Karen was taken away by the guards.

This marked the climax of the drama around Samidoh.

In yet another video posted on social media, Karen is seen performing on stage with Samidoh and Akorino singer Karangu.

Edday shared through her social media a photo with her husband saying she was ending the year on a high note.

“Ending the year on a high note with family and friends. Dubai lazima mugithi ishike.”

On the other side, Karen also shared a post after landing in Dubai.

She said she was a big supporter of people “being exactly who they are.”

Samidoh was performing with other Mugiithi artists among them Joyce Wa Mama, Karangu Wa Muraya, and DJ Dbul in Dubai.

Samidoh’s Music promoter in the US Bernice Saroni has sent an encouraging message to Edday asking her to remain strong after the dramatic incident.

“You are in my prayers sorry hun my flight got interrupted in Switzerland but hold your husband tight. Remember when things are too good that’s when the devil comes for you. Stay calm this shall pass too,” Bernice said.

Samidoh is seen asking the guards to eject Karen Nyamu from the stage 😱 pic.twitter.com/84nZdoK5CH

Post a comment
WATCH: The latest videos from the Star
by STAR REPORTER
Sasa
17 December 2022 - 09:37
Read The E-Paper