Helping hand reaches the forgotten ones in Mathare

• Urban slums are poorly equipped for the virus, with congestion and shared facilities 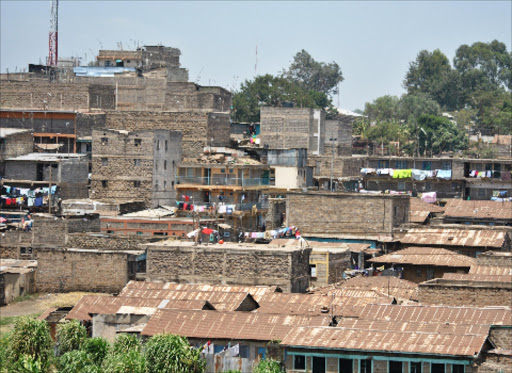 The social distancing policy in effect is impossible to achieve inside Teresia Mwihaki's one-room house in Mathare slum, Nairobi.

Five guests squeeze to fit, keep their masks on and survive the rising heat levels that have everyone's forehead dripping in sweat as soon as they settle in.

Teresia stands beside her bed, sweat dripping from her red cotton hat and her hands held tightly together to her front. She does not have a mask on but says she was given some a while back.

She smiles and says, "Welcome to my big house."

She stays in the house with her children, who she describes as not less than 18 years old, and her three grandchildren.

"The sofa you have sat on also serves as a bed. We lift the table and place it on that chair then lay a mattress down for the other children and then the bed," she said.

The path to her house is narrow and has multiple sewer lines running between houses, which are also squeezed together.

When walking along the path, the contact between two people invaded personal space, most residents did not have masks on and some were drunk and passed out in the street.

Even though she has been listed in more than 20 donation lists, this is the first time she had received any relief food.

However, Rachael Mwikali, a feminist and 2016 Lobbyist for Change Award winner, is responsible for Teresiah's luck today.

She has been donating over 600 food packages as well as sanitary towels weekly to families in need around Mathare.

That's how she ended up reaching the forgotten family of Teresia, who said she is a godsend.

"When those lists come, they ask for our full names, ID numbers and we give them, but I think we are being taken advantage of," Teresia said.

"You are the first people to actually deliver and in person, which makes it more special, thank you."

Teresia works within her community, operating a small kiosk that sells food.

"I operate a small kiosk where I cook food like githeri or rice. In a day, before the virus, I would get back about Sh300 in earnings," she said.

However, with more than just her mouth to feed, she has found herself bringing back the food she cooked to sell and serve it for dinner.

"With the Sh300, I would take Sh200 to Chama so I get money to pay for things like rent and to channel back to the business," she said.

The average rent in Mathare is Sh2,500 monthly, excluding expenses, such as washrooms, which are an average of Sh10 for each person, electricity connection between Sh300 and Sh500 monthly.

"Now business is bad because I come back to the house with most of the food that I cook, but at least that means my family and I will have something to eat that day," she said.

However, this also means she is running losses every day. Nihon has donated over 200 packages of food for the residents of Mathare. Teresia received her package from him.

"For the next few days, we hope this will make things easier and feed you and your family," Mwikali said.

A few houses over, we meet Mama Timo, who is described as an angel by a few of the youth.

"Her house was a safe haven for us because there was always food here and we would watch TV," said Lucas, a youth leader from Roots.

She has stayed with a few of them since they were young.

"There were about eight boys and I had my four sons, so that was 12 people and I fed them all," she says, laughing.

"It's been more than 20 years that they have been together. I have seen them grow up."

Mama Tito now lives with her grandchildren. There were currently four in the house.

"I told my children to bring them so they can stay with me here," she said.

The two eldest girls are cooking pancakes when we get in and were also confronted with a basin full of dirty utensils.

However, they are lucky they have access to technology at their grandmother's house; they all have smartphones.

Mama Tito operates a liquor store, which is her main source of income.

"A lot of people do still come to eat here and sometimes stay and this food package will really help me feed them," she said. "I'm thankful to God."

Urban slums are poorly equipped for the virus. This according to a paper submitted to the Bulletin of the World Health Organisation on Covid-19-related knowledge, attitudes, practices and needs of households in informal settlements in Nairobi.

The survey found 50.3 per cent of households reported they used shared water points located outside of the house or plot, while 58.9 per cent reported using a toilet shared by multiple households.

"Over 97 per cent of participants had heard of coronavirus. Overall, knowledge regarding Covid-19 symptoms and high-risk groups was accurate," read the paper.

However, there were some misconceptions regarding specific symptoms and incorrect identification of children as a high-risk group.

The main fear reported by 68 per cent of the participants is that Covid-19 is a virus that may result in death. Another 40 per cent feared there is no cure or treatment.

"However, 34 per cent of people are also afraid of losing their jobs, but slightly more men than women and 22 per cent fear it may lead to food shortages," read the paper.

Loss of employment and food shortages were ranked as higher concerns for each increasing age group, with older people more concerned, whereas fear of dying was higher among the younger age category.

The paper recommended strategies to increase access to water, soap, hand sanitiser as well as an improved solid waste collection will be critical to reducing the spread of Covid-19.

"Behaviour change communication is critical and must be tailored to the living conditions of poor residents in urban slums, promote feasible behaviours, and use channels that will reach all sub-groups, including those who are not literate or do not have a phone," read the paper.

It also recommended equipping the health workforce, including community health workers and NGO partners, to disseminate guidance and information as well as support with case management and contracting.

Post a comment
WATCH: The latest videos from the Star
by NJERI MBUGUA News Reporter
Sasa
08 May 2020 - 05:00
Read The E-Paper