With no relatives or friends to take him in, 27 year-old has no roof over his head, no regular meals

•Ng'eno says he has volunteered at National Museums of Kenya for over one year and is yet to secure a job.

•He lives at a bush near Deloitte offices along Waiyaki way, exposed to harsh conditions and rain. 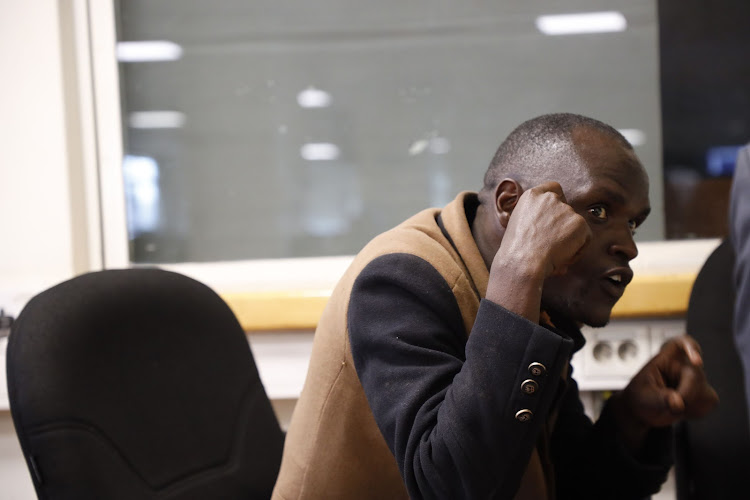 ANOTHER DESPERATE GRAD: Dennis Ng'eno explains his predicament to the Star at its Westlands offices on MondayOctober,14.
Image: VINCENT OREMO:

Growing up in a broken family, herding cattle so he could go to school, sleeping in corridors during university, Dennis Ng'eno knows what a hard life is.

But armed with a university degree in geology, Ng'eno thought there surely would be opportunities and a good life ahead.

So do a lot of people with degrees.

Now the 27-year-old  holder of a bachelor's degree in Geology is living 'in the bush' near the Deloitte offices along Waiyaki Way in Nairobi.

He has no close relatives or friends to take him in.

He told the Star on Monday that after clearing his undergraduate studies in December 2017, he got a two-week contract with Tritech Construction and Engineering to do field mapping for bauxite in Kericho.

That came to an end.

After graduating in February 2018, he couldn't find a job.

"I applied to the ministries of Mining and Water, to the Geothermal Development Cooperation, to KenGen, to the Ministry of Foreign Affairs' mineral assessment section. But I never succeeded, he said.

Since June last year he has been volunteering at the National Museums of Kenya as a geologist. He said when he first got the volunteering opening, he was supposed to go for three months and get Sh1,000 per month.

After three months, he got a one-month extension but no Sh1,000.

So how does he live, eat? While volunteering at the Museum, Ng'eno does menial jobs on weekends like washing cars or cleaning dishes in hotels in Kangemi. It's not enough to pay rent in Kangemi, where he used to stay.

"My head of department at the National Museums stepped in to help," he said, but the patience of his landlord ran out.

"They kicked me out of the house so I took my documents to a shopkeeper to store them but keep my clothes at the Kay-Apple shade near Deloitte where I sleep," he said.

Now he is forced to beg for food. Going hungry is normal, one meal a day is good luck.

"I approach people on the street to give me Sh20, Sh50 or may be Sh100. I take the risk because some people think I'm a conman or pretending or even lazy," he said.

But why doesn't he go back home and do something else?

Ng'eno says he does not have a place to call home upcountry as his single mum is a tea picker moving from one place to another. He doesn't know where to find her.

"That's how life has been. We have never had a place called home and I don't know where mum is right now," he said.

He has tried to get work in the county government, no luck.

Geology is his love, but he'll do anything.

"At the Museum, I do field mapping, rock analysis, mineral examination and scouting for potential mining areas, water mineral sensitivity, among others. These are my areas," Ngeno said.

"But for now, my priority is to do anything to help me make ends meet, to find my mum aone day nd make sure she's settled."