• She admits that the industry is male-dominated but that did not hinder her. 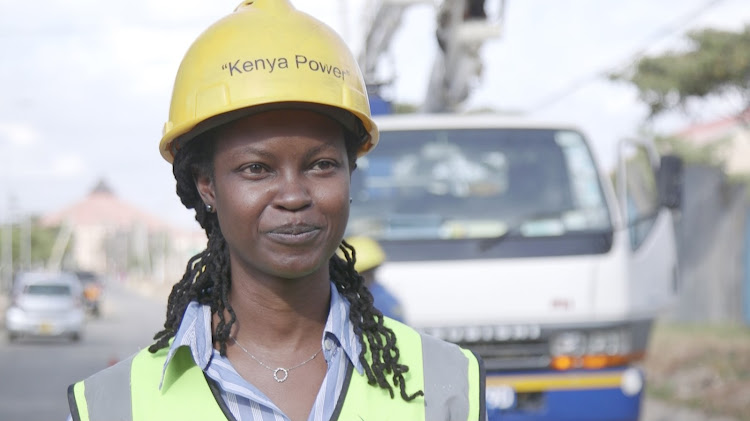 She has taken up jobs that were previously left for men. She has defied all odds and stereotypes of the society to do what she interestingly believes is her calling. Both naturally, and by talent.

While the country still battles cultural inequality within the engineering sector, Grace Karuiru has what it takes; and she has put it into practice for 11 years, at the Kenya Power and Lightening Company.

When we met her for this interview, we found her getting ready to supervise the routine KPLC maintenance services, in Nairobi’s South B area. She was donned in the usual blue and yellow overall, she was all smiles – an indication of someone doing what she has passion for. Grace is in charge of customer service, operations and maintenance at the wider Nairobi South region, which also includes South B.

She admits that the industry is male-dominated but that did not hinder her aspirations to become an engineer.

“When I joined operations at KPLC there were only three ladies and work was limited; I became the fourth woman in operations in the whole country,” she says.

Her background played a key role in inspiring her to roll up her sleeves and take up the job, one, which she says, was naturally meant for her.  “I grew up among boys so the field has not been such a major challenge – you can excel in a male-dominated field,” she adds.

Grace studied Electrical and Electronics Engineering, Power Option at the University of Nairobi, and joined KPLC in 2008 as a contracted designer. The former Pangani Girls alumnus says she has never been treated differently for being a woman in an engineering sector, which somehow may not be so friendly for the faint-hearted.

“The working environment is not very conducive but you have to work even if you have a baby back home; you might have to respond to emergency calls even in the middle of the night.”

Her current job entails day-to-day customer service, revenue collection, operations and maintenance. So what motivates her to keep going? “I like fixing things, I am naturally a fixer and I started dismantling things at my childhood,” she says.

She says the engineering sector is not one you would come in and boss your way through as a woman. That unity of purpose and support from their male colleagues will be key to transforming the entire sector – and to inspire upcoming generations to pursue engineering courses and by extension offer quality of service after studies.

“It is not about how I will go in as a lady and muscle my way in but how we can go in together and transform the industry in terms of standards, quality of service that we are giving.”

According to the Institution of Engineers of Kenya, its registered members stand at 6,444 members. Female members are only 436, meaning women form only 7 per cent of the membership.

Grace is among the Kenyan female engineers who will be sharing their experiences at  the 26th Institution of Engineers of Kenya (IEK) conference scheduled for 3rdto 6th September 2019 at the Leisure Lodge Resort in Diani South Coast. Gender imbalance in the profession is among the key challenges that will be addressed at the conference.

Grace says she expects the conference to address the way forward on dealing with that challenge.

The conference whose theme is overcoming the 21st century challenges seeks to bring together engineers, academia and other participants to discuss the roles and responsibilities of the engineering fraternity in surmounting the current and future challenges facing humanity for socio-economic development.