NO WATER NO CLASS

Lack water for personal hygiene when having monthly periods

The county is experiencing drought and most of its water sources have dried up. This has hindered three to four girls in every class from attending school daily.

“Most girls in this school have missed school every month due to drought,” he said.

He said the girls stay at home and walk 10-20km in search of water to clean themselves.

The headteacher said boys are a bit tougher. Cases of absenteeism among them have been low, as they can withstand the harsh climatic condition.

Rotich said water has been a major problem, and this may hurt the school’s performance.

They are forced to send boarding students to walk 10km in the evening to fetch water for their personal use.

The head teacher said many pupils missed midterm exams after failing to report the past two weeks.

In the neighbouring Chebukat Primary School, the problems are similar. Head teacher Pius Dakta asked well-wishers to chip in and help solve the water shortage.

He said all schools in the region need to have a borehole to help retain children in school.

“We as teachers we are demoralised when our pupils miss school daily due to avoidable circumstances,” Dakta said.

“The national and county governments should come together and help us find a permanent solution to water shortage since it affects us every year.”

He said many girls have managed to escape from early forced marriages and female genital mutilation after the government introduced the anti-FGM law and NGOs helped fight the practice. This has improved their school retention.

“As education stakeholders, we shall not stand to see girls dropping out of school due to lack of sanitary towels and lack of water for their personal hygiene,” Dakta said.

The effects of drought and lack of water in the region forced Pokot South MP David Pkosing to seek a temporal solution to the problem.

The MP supplied water bowsers to the affected schools to help retain girls and prevent the children from walking for long distances to fetch water.

He said the schools are at risk of being closed, and he was forced to intervene by supplying clean water.

“This is short-term but it will help sustain the schools until the rainy season sets in. We don’t want children to migrate with their parents because this will prevent us from achieving 100 per cent transition,” he said.

“Migration has exposed our people to various diseases, and this year we want to reduce the rate at which our people migrate in search of pastures and water.”

The legislator called on the Education ministry to include the affected schools in a school-feeding programe to help retain the children.

“Most pupils in lower primary schools are unable to attend school fully due to lack of food, and with the effects of drought, the ministry should intervene so we can help the nation in achieving Vision 2030,” Pkossing said.

Residents of Kapsmatia celebrated after they were also provided with water bowsers, but they called for a borehole to be drilled.

Monicah Metiach said most rivers and dams had dried up, and residents were fetching water from Iyon and Chesra rivers about 20km away.

Metiach said a 20-litre jerrican of water is being retailed at Sh50.

“The water being sold by boda boda youths is not clean for human consumption. They fetch direct from the river and residents are forced to buy since they have no option,” she said.

She said livestock have been hit hard by the drought since water dams had dried up.

“We fear the few animals that remained behind to sustain families may die due to lack of water and pastures. Most of our animals are currently grazing in Uganda,” Metiach said.

She said many women had miscarried on their way from the river due to walking long distances and carrying water on their backs.

Jane Chepsait, a parent, said a day in their lives is full of strain. “We leave our homes at 8am to search for water and we come back at 3pm. Most parents have formed duty rosters with their girls to ensure families have water for daily use,” she said.

William Etiach praised teachers for allowing children to be in school with dirty uniforms.

“Teachers have understood our problems and cases where teachers send children back home to clean their uniforms have not been reported,” he said.

Etiach said the conflicts that have reemerged along the border are due to lack of water and pasture.

Recently, students of Pooi Primary School blocked the convoy of Governor John Lonyangapuo at Orwa while he was heading to Turkwel for a peace meeting.

Carrying placards and jerricans, the pupils blocked the road, asking the governor to ensure the school has clean water.

Some of the placards read: ‘Water water nothing else governor’ and ‘Water our major challenge’.

The governor was forced to stop and address the pupils, where he promised to ensure the school gets clean water.

Most parts of the county are dry, and residents have been forced to move to Turkana, Trans Nzoia and Uganda in search of water and pasture. 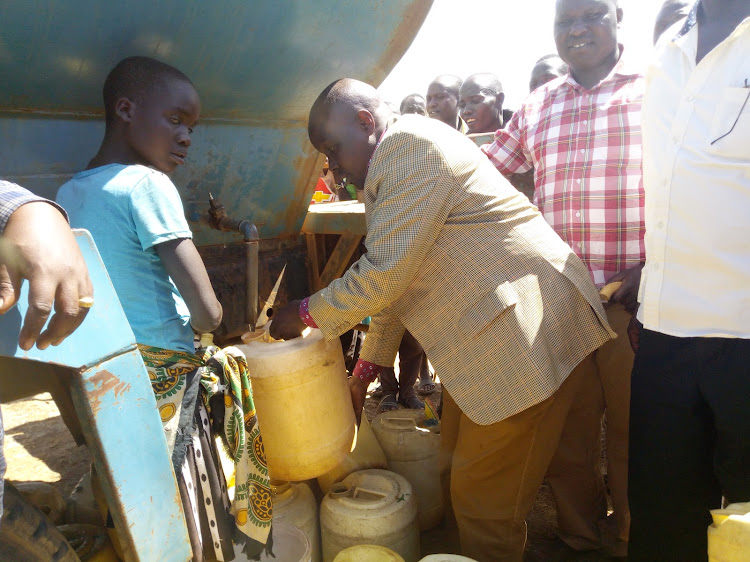