What goes on during a Samburu wedding 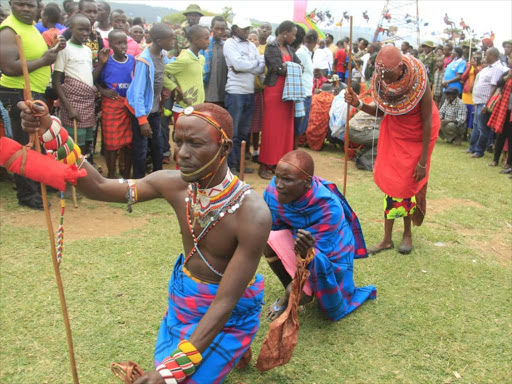 A newly wedded Samburu man, elder and his wife departing to their matrimonial home

When a Samburu man meets a girl he fancies, he initiates a cultural process that can sometimes last months as bride price negotiations take place. The bride-to-be may not even be aware that the man is interested in her until his family shows up at her homestead with part of the dowry.

In Samburu, women have little say over who they marry. The girl's decision is not factored in the whole process. No dating. No courting. Sometimes a man lives with a woman and sires children with her before he finally decides to marry her.

“If the man is interested in the girl after the talks, he starts planning on how to pay the bride price. This differs depending on the financial stability of the family," Lempushuna, a Samburu elder, told the Star.

weddings are conducted early in the morning before sunrise. The groom is escorted to the girl's home by a group of dancing morans.

The groom pays dowry before the wedding. The dowry could be four to nine goats or cows, depending on the financial stability of the man's family. The animals are

distributed among the bride's family. On the wedding day,

accompanied by a few of his friends adorned in traditional regalia, the groom takes three goats to his in-laws and slaughters one (Rikoret) at the doorstep, a sign that he now owns the wife.

His hair is coloured

red (Ikaria) to signal he is beginning a new life. During the wedding ceremony the morans who accompanied the groom dance a lot. They are dressed in lion skin, which is a sign of bravery.

"If the girl you are set to marry has not given birth, then you are supposed to kill a bull but if she already has children, you kill a male goat," Lempushuna explained.

"The groom is received by the girl's family, who take away his shoes so that if he gets cold feet, he cannot run away as people will notice him on the way."

The mother-in-law shaves the groom's hair and hands him a sword and a traditional garment that he must carry for the duration of the wedding. "This is a sign that you can take care of your wife. In case you lose it, it will mean you are not in a position to take good care of your wife and the elders may decide not to give you the girl," Lempushuna said.

Blood from the slaughtered bull or goat is mixed with milk and kept under a traditional bed the whole day. The bride and the groom spend the day at the man's mother-in-law place receiving marriage advice from the elders.

On day two of a traditional Samburu wedding the bride departs for her matrimonial home with her husband.

Elders bless the couple and

counsel them on the community's tradition and family life. Another ritual is done outside the girl's mother's house.

The bride and groom leave her home together and are not supposed to look back. The Samburu believe if one looks behind, you will turn into salt. It is a way of telling the girl to never come back to build her mother's house.

The bride is given a traditional gourd with milk, a sign she will have enough food, and another small gourd filled with goat fat, which symbolises fertility.

The couple pour the milk and smear the fat on each other as a sign of blessing. The milk will be shared with the

children, which means the couple will have their own children.

In Samburu, there is no divorce. If a man mistreats his wife, she can curse him like a mother can.