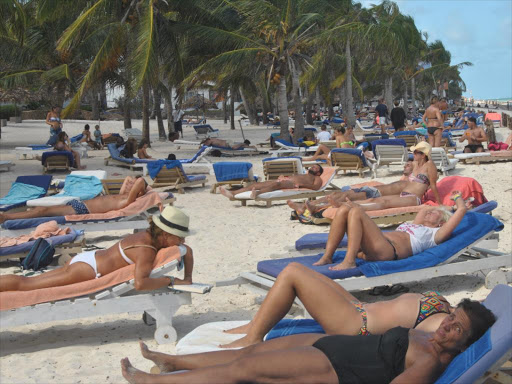 Tourists on holiday at Jacaranda beach resort in Watamu on August 17 2017. Tourism has shifted to Watamu because of nice beaches and clean Ocean water /ALPHONCE GARI

Malindi’s lucrative tourism business has experienced a remarkable rise and fall over the years.

The lure of its white, sunny beaches and natural blue ocean water has gradually been eroded by safety and environmental problems.

History has it that the town’s tourism sector has been a valuable industry, with the first structures having been built in the early 1930s.

The structures were built to cater for upcountry residents, who loved Malindi for its fine beaches and sports fishing.

Research has proved that among the first hotels to be built in the wake of the tourism boom were Blue Brady’s Palm Beach (Blue Marlin), Lawfords, Sinbad Hotel and Eden Roc.

Those familiar with the tourism industry claim the modern-day tourism began after establishment of the Malindi airport.

However, gone are the days when Malindi used to host thousands of tourists. Now there are only ghost hotels and some abandoned and empty resorts.

Only a few hotels remain in operation, as some investors either closed down business or sold their properties due to huge losses incurred.

Traditionally, Malindi grew into a small trading village, where people came by boat to exchange goods.

The town was formerly an independent Islamic village. It came under the influence of the Portuguese in the 16th century for some 200 years, before being ruled by the Sultan of Oman and Zanzibar and later, in the 19th century, the British.

It is strongly believed that Dagama is the one who opened Malindi to the world.

Due to the trade links, the little-known village of Malindi later came to attract the British white settlers, who were amazed by the white, sunny beaches and the Indian Ocean.

The colonial government saw interest to open Malindi as a centre for trade, holiday and tourism resorts.

To attract the British in Malindi, the colonial government started giving out pieces of land along the seafront to reward those who served in their tenure.

Their area of interest was not only in Malindi but also from Msumarini in Magarini to Kilifi.

In the early 1930s, the British settlers began showing interest in visiting the ‘village’ for holidays.

The first hotel in Malindi was started in 1932, when Pat Brady reportedly bought an old house that had originally been built by a European rubber plantation owner before 1914.

The hotel was called Blue Brady’s Palm Beach (Blue Marlin), which is located right opposite the current Barclays Bank. It operates as a residential area with apartments owned by private individuals.

Hoteliers well versed with the evolution of tourism in Malindi say that one of the British commanders, Lawford, started setting up shelters for people to come for holiday in Malindi. Lawford was a navy commander during the 1st World War.

The shelters built at the seafront later came to be what until today is called The Lawfords Hotel, which is near the Malindi Muslim Cemetery.

Chai, now 72 years old and retired, says local white farmers from upcountry later built their own resort in 1946: the Sinbad Hotel (formerly New Malindi Hotel), where they used to stay in those hotels.

Internet sources say the hotel was built by Margaret Bowker Douglas in 1946 as the New Malindi Hotel.

New Malindi hotel was in

1948 bought by Phillip and Marjorie Mumford and renamed Sinbad.

During that time, The Sindbad Hotel was a prime place to stay in Malindi. Currently, the hotel only remains as some old ruins since it has long since collapsed.

A few years later, the Germans also developed interest in Malindi and set up their first resort — Eden rock hotel.

Chai says it’s the Germans who built the first airstrip, as they preferred flying directly to Malindi and, in less than five minutes, reaching their hotel.

Unknown to many, the first airstrip in Malindi was located right opposite the Eden Rock Hotel and extended to near the ADC farm.

What made tourists love the resort town was the nearness to the airstrip from hotels, the beach and even shopping.

“Tourists had everything they needed in Malindi. One would land in a private flight, walk to a hotel and go shopping,” says Chai.

Sir Wilfred Havelock, a Briton who was very instrumental in the formation of the Majimbo constitution during the Ronald Ngalla era, is the one who came up with The Sinbad Hotel resort.

Together with his wife Patricia, they invested in the Sinbad Hotel and began the first packaged tourist offers.

n 1955, Malindi started booming due to packaged tourism. It did not take long, however, before environmental problems started affecting the natural blue Indian Ocean water.

Trouble started during heavy rains, as there was massive silting at River Sabaki, which highly affected the beachline of Malindi.

“We used to transfer guests to go to Watamu during the day and come back at night,” says Chai, who was once a general manager at SinBad Hotel.

Tourists had to be transferred to Sea Farers Hotel, now Hemingways, because Watamu beaches were clear.

The same problem is the one that to date is still affecting tourism in Malindi and has forced many investors to relocate to Watamu.

Chai says when Germans began coming in large numbers, Eden Rock could not accommodate them.

Italians began flocking to Malindi after the San Marco Space Agency project began in Malindi in the 1970s. They began acquiring land and invested heavily.

Later in the early 1990s, the British began pulling out of Malindi and moved to Kilifi and Rea Vipingo.

This was as a result of the existence of the Italians, making both the Germans and the British uncomfortable.Only a few remained and to date still own homes in the resort town.

Italian culture was different; they bought prime land at any cost and would interact with locals.

“In the villages, children began learning the Italian language. One would be given sweets by saying Ciao (Jambo),” says Chai.

Other foreigners who had been in Malindi for long began thinking the resort town had turned into a mafia town. Children stopped speaking English and began learning Italian. Furthermore, drug trafficking began.

With the demand for land, cases of land-grabbing spiked. Brokers in the name of politicians did good business that time and acquired wealth.

More hotels came up and Malindi with Watamu had about 26 hotels and over 3,000 private villas.

Today, there are over 50 hotels but in Malindi, just 10 of the hotels are open and operating under losses, with less than 10 per cent bed occupancy.

Roberto Macri, a former Italian consulate for Malindi who is now the general manager of Seven Islands resort in Watamu, says Malindi tourism was good in the past 35 years.

He says people shifted to Watamu because it’s safe, beaches are clean and people can walk freely.

Further, he says Watamu market does not rely on foreign market only, but a mix of locals from Nairobi and Mombasa with Asians.

Some of the burning issues investors are complaining about to date include the delay in expanding the Malindi airport, which has lasted over 25 years.

Currently, tourists from Europe, after an eight-hour flight, have to travel by road from Mombasa to Malindi or Watamu, which is tiresome.

Macri also attributes the decline of tourists in Malindi to the monopoly of the Italian market, which was heavily relied on.

Asked about the possible solutions to revive the tourism sector in Malindi, Chai says there is need to upgrade the resorts to suit the modern-day traveller.

“The occupancy in Malindi is low because the product is tired. The government should encourage local investors, give them incentives to invest in tourism,”

Local investors, he says, should be allowed to acquire the ‘dead hotels’ and upgrade them.

He says county governments should also come up with conference facilities with a capacity of up to 2,000 people, and establish a sports complex.

“Land ownership should also be streamlined. It is scaring away investors,”

Despite its problems, many believe tourism will boom again in Malindi in the near future and return to its lost glory.