Watamu excursion: The ultimate tourism escapade at the Coast 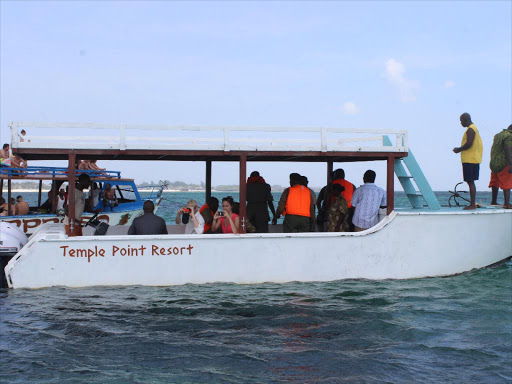 Watamu is tropical heaven with a serene, sultry skyline and a diverse marine life, which live just off-shore. It has hot, golden sunshine and foaming, shimmering ocean waves.

The town is a renowned world tourism destination that offers you the best excursion experience, one you will never forget.

The exclusive excursion has turned out to be the undisputed jewel in the resort city.

The Watamu Marine Park and Reserve is renowned worldwide for its natural beauty and boasts a rich marine life, from the visiting Whale Sharks and Manta Rays to three species of Sea Turtle.

Pristine, white-sand beaches and reef-protected lagoons line the Watamu National Marine Park and Reserves, which are the oldest in East Africa and cover over 229 square kilometres.

It is one of the best kept secrets in the world, attracting tourists from all walks of life to have a taste and feel of the marine ecosystem.

During a tour of Watamu, one cannot afford to miss the excursion titled ‘Safari Blu’ by local boat operators, who are experienced in marine tour operations, to showcase the unique attractions available.

Recently I joined the local tour operators in one of their many excursions, and the tour was amazing and memorable.

The sea safari starts at exactly

on a glass-bottom boat cruise, Sopresso, off to the adventures of the blue oceanic waters of the resort.

After a while, we receive a call from one of the fishermen, who has spotted the dolphins within the northern part of Watamu Marine Park.

Here, we are joined by other tourists, who are excited to watch the dolphins swimming.

All other boats with tourists, some seated on the rooftop, converge at the area to take in the thrilling view.

We are lucky to see more than 20 dolphins jumping up and down the waters, one at a time.

The excursion, which lasts nearly the whole day, is just one among the many attractions available at the Watamu marine reserve.

They are properly coordinated and organised by the community in collaboration with the Kenya Wildlife Service.

After about 30 minutes of dolphin watching, we go for snorkelling to view fish within the marine protected area.

Tourists are able to dive and swim with fish, which are very friendly and enjoy the company of humans.

Others can still view the fish through the glass fitted at the bottom of the boat.

As tourists swim and enjoy the Indian Ocean water, there is music coming from the background, and at times the tour operators begin singing and dancing happily with their guests.

Later the team leaves for Garoda beach resort for swimming and enjoying the scenic white beach.

Garoda beach is located at a strategic place among all the hotels in Watamu, and the beach attracts many visitors.

Tourists take time and leave at their own pleasure to proceed to the normal excursion.

Dadi Said, one of the boat operators, says their excursion begins at Blue Bay beach in the morning, off to the dolphin watch area, which lasts around 30 minutes.

He says their next stop is the coral garden, which is in front of Garoda beach resort.

“At the coral garden, we take time until the tourists feel satisfied or tired. They go down to check different types of fish,”

Previously, tourists were allowed to feed fish with bread, but the KWS banned the practice.

“We work in collaboration with the KWS. This is an area for fish viewing. There are fish of different colours,”

After three hours at the coral garden and Garoda beach, it was time to go for lunch, this time not in the luxurious resorts.

Tourists are taken to the historical Sudi Island in the mangrove channels west of the marine park.

This is where they get a taste of nature and cruise along the channels of mangrove with different species of birds.

The local community set up a restaurant called Waka Waka that specialises in seafood, which is served with rice made with coconut milk.

At Waka Waka, a chef only known as ‘Mr Alright’ specialises on seafood grilling. He gets his grilled fish, lobster, octopus and prawns in order.

The grilled fish is served with rice, beer or soda, and tourists get to enjoy local cuisine in the mangrove.

Alright says his secret to the food is cooking them while fresh from the ocean.

He was nicknamed Alright because everything was perfect with him and alright for tourists.

He has one secret for lovers who visit there and always want to go back.

Alright makes a special meal that keeps couples lively in bed and enjoying their sexual desires.

He learnt the skills from his mother, who showed him some special spices to add in the meal to arouse sexual desires for couples.

Some tourists call him their witchdoctor because their libido rose after eating his meals.

He makes octopus soup, and before serving the meal, tells the tourists they will enjoy sex.

“The results have always been positive. They say they really enjoyed and do not want any other types of foods,”

Alright says Waka Waka restaurant has enabled him get income and offered employment to many community members along the Sudi Island.

He makes lunch of 40-50 people, and all leave the restaurant happy.

Most of his clients are Italians and British.

After lunch, tourists are entertained with a traditional Giriama dance and made to wear traditional regalia.

During the entertainment session, locals sell curio products and other items that are attractive to tourists.

The idea of income-generating activities within the mangrove sites was initiated by conservation groups.

Previously they mainly used to do conservation but were getting no returns for their effort.

“We came up with income-generating activities by setting up picnic sites for tourists. If they visit, they enjoy and we get profits,”

Their association, which is among many others, is opposed to illegal fishing activities or destruction of mangroves as the area is an important breeding ground for fish.

He says over 200 people benefit directly from the income-generating activities, while more than 1,000 also are indirect beneficiaries.

Hussein Abdi, the director of Sopresso glass bottom boats, who also founded Waka Waka picnic site, says they came up with the idea of excursion to showcase the hidden treasures within the Mida creek channels and in the Indian Ocean.

“Watamu has many beautiful sites with fish, corals and different attractions. The channels at Mida creek lead to many villages that are not known and offer good adventure,”

To open up the area, they formed an association called Sopresso self-help group, which acquired glass bottom boats specifically for the Watamu excursion.

Today their excursion has turned to be an attractive and undisputed jewel that tourists love.

In future, the group plans to set up a boardwalk to the channels and floating restaurants.

Ntindi Kassim, the deputy warden at Watamu Marine National Park and Reserve, says the 32km stretch in the marine reserve is dominated by mangrove cover.

Among the channels is Sudi Island, where most tourists visit for picnic, mangrove watch, bird watching and excursion.

Kassim says mangrove cover is important because mangroves are depended on for the protection of the shoreline and act as breeding ground for fish.

Furthermore, Watamu marine reserve is an Important Bird Area, with about 55 per cent of the wetland birds in Kenya.

“Most of the birds are found within the creek in the marine reserve,”

“It was declared as a man and biosphere reserve in 1978 by Unesco, and within the reserve, there are different activities going on.”

Within the reserve, she says, there are some communities that are allowed by KWS to do some sustainable activities, such as controlled fishing and eco-tourism. The reserve has nine species of mangroves.

As we go back home in the evening, we agree that the excursion is a unique experience for any tourist who gets a chance to explore.