Travel Review: Getting up close to the reptiles of Watamu 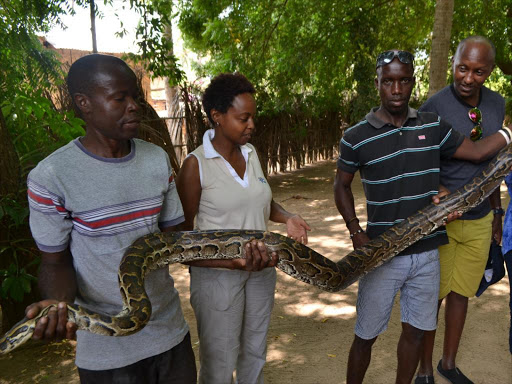 recent visit to the Sita Snake Park of Watamu revealed the commitment of ordinary people to rescuing and conserving local reptiles. The park is located next to Mida Creek, a designated Unesco Biosphere Reserve.

We were guided through the park by the ‘snake man of Watamu’, Jackson Mwamure. He likes snakes and likes to educate people about them. Even though he has been hospitalised because of a snake bite, he continues to work with them.

Mwamure explained to us the different types of snakes, which are kept in boxes with glass walls. Most of them lay quietly unmoving, although one or two turned their necks to follow our movements. Some of the snakes are highly venomous, such as the puff adders, black mamba, green mamba and spitting cobras.

They have non-venomous species like common house snakes, bush snakes and rufous beaked snake, which visitors can touch or hold if they wish. I took the chance to hold a snake. The body felt smooth and cool in my hand. It took several of us standing in a line to hold large African rock python with strong, rippling muscles.

Apart from snakes they have chameleons and large monitor lizards with yellow dots on their scaly bodies. The monitory lizards stay inside a sandy pit and kept hissing angrily at the visitors.

In the same pit were several types of tortoises, including leopard tortoises, small hinge-back tortoises and side-necked terrapins, which like to wade in a pool of water.

In another enclosure was a young crocodile that was found alone near a river. The park officials hope to return it to the wild once it is older.

When he is not at the park, Mwamure goes into the community to remove snakes from homesteads. He uses these opportunities to educate people about snakes and how to identify the poisonous ones. Mostly the captured ones are released into the bush but in an area away from people.

A visit to Sita Snake Park can be combined with a dhow boat ride in the creek or a meal at the nearby Crab Shack restaurant.