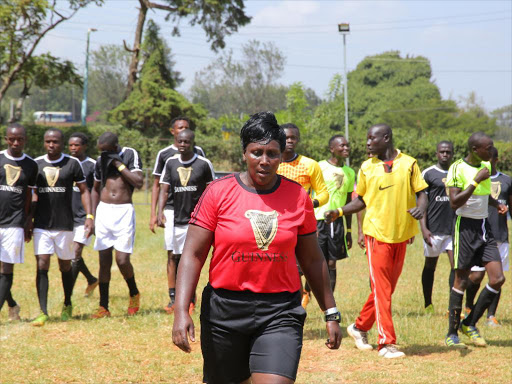 You already have a red card,” Tabitha Njoroge, a KPL referee, tells me after being late for our interview.

Tabitha, popularly referred to as ‘Iron Lady’, was among the first women football in referees when she started her career in 2004. You might have seen her in a Guinness TV advert under the ‘Made of Black’ campaign to highlight people achieving great strides, but what is it really like to be a woman referee?

The Star caught up with the Fifa-accredited referee, who won the KPL referee of the year award in 2014, to get a glimpse into life in the field.

“When I started officiating games back in 2004, I had to endure many insults from fans, who didn’t think a woman could be a referee. They would shout insults like: ‘Go back to the kitchen and cook’ and ‘You should be washing clothes not officiating matches’. But I stayed the course. I knew what I wanted and later on, the fans developed a respect for me because they saw I did my work well, sometimes even better than my male counterparts. Now they don’t see a man or woman; they just see a referee,” Tabitha says.

Tabitha, 38, was fascinated by football from an early age, and she finally got a chance to referee in 2004. She started out in the small leagues and worked her way up and in 2009, she was accredited by the Kenya Premier League.

The single mother of two teenagers — a boy and a girl — says her children motivate her to push hard to achieve her goals. “I have to be a good role model to them, pay their fees and take care of them, and that challenges me to be the best I can be.”

In the emotional Guinness advert, Tabitha talks of the pain of losing her husband, but this is not a topic she wishes to expound on. She firmly says, “We do not have to talk about that. I would rather we don’t.”

Late last year, a wave swept across continents uniting women who have faced sexual harassment at work under the #Metoo and #Timeisup campaigns. Tabitha says she has not experienced sexual harassment or bullying in the course of her work, but says she is always proactive in advising young women, launching their careers as referees to focus on the game on the pitch and not anywhere else.

“I always tell them: Don’t exchange your dignity to become a referee. Be disciplined and focus on your work.”

The gender pay gap debate has recently grown across the world, with cases such as Carrie Gracie, who was the BBC China editor, protesting against being paid tens of thousands of pounds less than her male counterparts for equal work.

Tabitha says she has been fortunate not to experience pay discrimination based on gender. “I don’t earn less than my male colleagues. There is fairness.”

In coming years, Tabitha wants to pay it forward and train upcoming women referees. “Fitness is an important part of the job because you need to run up and down the field often.”

Her lowest moment was when she failed a physical endurance test and was unable to officiate a match. But she did not give up. She trained harder and took another test a while later and passed it.

Tabitha’s final words of advice are, “In football there is no tribe, race or colour, you speak with your whistle and your cards. I always tell people to be disciplined and to go for whatever they have decided to pursue because nothing is impossible. Don’t be shy. Regardless of what you go through in life, you can make it. Just put God first,” Tabitha says.

Sheena Chiteri, 28, is the founder of Strategic Fashion Development Consortium.

She studied law at the Catholic University of Eastern Africa, but her passion for fashion got the better of her and she ended up as a designer focused on bridal gowns.

“I didn’t sell as many as I would have liked – about five a year – because this is a speciality area,” Chiteri says.

She moved from the front end area of fashion to back end – getting to understand how the industry works and how aspects including law and finances merge to make it a viable business.

Chiteri was in London last week for a roundtable with the Commonwealth Fashion Council on the future of fashion. She also got to attend the London Fashion Week.

“We had a 30-minute roundtable meeting with big names including the Duchess of Cambridge Kate Middleton, Vogue editor-in-chief Anna Wintour and model Naomi Campbell. It was a very humbling experience. It just brought to the fore that we have a lot to do to improve the industry and it is a challenge to us.”

Chiteri was instrumental in the formation the National Fashion Council for Kenya. “It is unfortunate to see that despite Kenya being the economic hub of East Africa, industry influencers have picked other countries to partner with because there is no focal point for the fashion industry in Kenya. There are many small fashion associations throughout the country and an investor may not know where to start. That’s how opportunities pass us because they end up going to countries such as Rwanda and Uganda where there are focal points.”

NFCK hopes to bring together all players to make them a stronger bargaining unit. “Many people don’t understand the backend of doing the fashion business. SFDC comes in to teach people about law, registering their companies and getting credit. When I started out my line while still at the university, I couldn’t get Sh500,000 capital. The banks said – in so many words – that fashion was not a sustainable business.”

Chiteri’s advice to upcoming fashion designers is, “Be proactive. Don’t expect to be spoonfed. Fashion is a space where you get to express your creativity in many ways so go for it.”

International Women’s Day is a worldwide event that celebrates women’s achievements while calling for gender equality.

It has been observed since the early 1900s and is celebrated on March 8.

This year’s tagline is ‘Push for progress’.

The is ‘Time is Now: Rural and urban activists transforming women’s lives’.

There have been many issues that have taken centrestage in the past year. The UK is celebrating 100 years since women were first allowed to vote.

Issues that are at the forefront around the globe include:

Pay gap: Are women and men paid equally for equal work? That has been the debate for years. A study by the Equality and Human Rights Commission in the UK found most employers believe a woman should have to disclose if she is pregnant during recruitment. It also found that women who have more than one child while working for the same employer are a ‘burden’. The reality is that women have it tough balancing work and raising families. They end up missing out on opportunities because some employers see them as being ‘less committed’ since they may sometimes have to leave work early or may be unable to attend late-night meetings.

Sexual harassment: It began with Hollywood producer Harvey Weinstein’s scandal of sexually harassing a string of women throughout the decades. One by one, more and more women began to speak up about being harassed, and now the list seems to be endless. In the West, big names have had their reputations tainted by sexual harassment accusations. They include hip hop mogul Russell Simmons, actor Kevin Spacey, casino big shot Steve Wynn and many others. In Kenya, not many women have spoken out against sexual harassment, mostly because of fear of victimisation and gaslighting.

“There is a close connection between women and flowers. Flowers are the crown of nature’s

maturing beauty. They add colour to bushes and fill the air with nice aromas. They are delicate and require to be tended to with care- You can't handle a flower roughly and not damage its fragrant fragile petals. They are also the source of the seed that perpetuates and sustains the cycle of life.”

A rose breeder will showcase the art of developing different types of roses (there are over 10,000 types). This will be combined with

(coffee tasting). The event will also feature a fashion show.

Post a comment
WATCH: The latest videos from the Star
by Claire Munde @Clairedudieu
Sasa
03 March 2018 - 00:00
Read The E-Paper