How we cope with rare multiple sclerosis 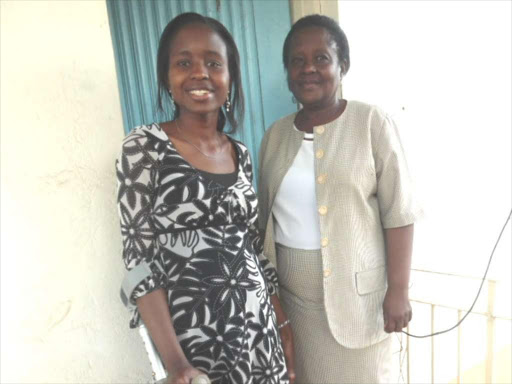 Nelly Mugadi, a multiple sclerosis patient, walks into the living room with a slight limp, her body slightly reclining to the left side, and serves the tea she had been making in the kitchen. The crutch she uses when she goes out leans on a corner near the kitchen.

On a cold, Friday morning in 2004, as a 17-year-old Moi Girls (Nairobi) form three student, Mugadi ignored her friend’s remark that she was staggering as she walked to class. She tried to write but she couldn’t get a grip on the pen.

“The school nurse called my parents and I was rushed to hospital where the doctor prescribed me medication while I was not in pain.” That Sunday was to be her last day in school for six years.

There are approximately 2.5 million MS patients across the world. Nairobi marked the World Rare Disease Day on February 27 at St Gertrude’s Children’s Hospital.

Mugadi, now 28, fell one day when her right leg went numb, and that marked the beginning of a series of misdiagnoses.

“The doctors found me alright after doing four CT scans. Later, the neurologist discovered that I had lesions at the back of my brain,” she says. The neurologist thought that at her age, she couldn’t have had MS.

Mugadi was treated for tuberculosis of the brain for two months instead of the recommended six, because her body reacted well to medication.

“The first six trials of the very-painful lumbar puncture procedure failed on me because it was done by doctors on training. We were able to get the spinal fluid finally when the neurologist did it himself, and he discovered I had MS,” she says.

Lumbar puncture is an injection administered on the back to extract spinal fluid.

She was put on steroids, which strengthened her, but didn’t cure her of MS. She rejoined school in early February 2005 at Moi Girls in form four first term and registered for KCSE, but her legs were numb and she remained bedridden.

“After six years, I was forced to join a day school, the Eastleigh-based St Teresa’s Girls High School, at form two because they didn’t have space for form three and four. I thank God I did so because I managed to catch up with the new syllabus. My classmates would ridicule me on realising I was older than them at 22,” she says. Mugadi had lost weight due to medication against tuberculosis, and so it was hard to tell her age.

Continuous use of steroids infected her with Osteoporosis, the weakness of the bones. She also developed Bell’s palsy, whereby her mouth turned to one side.

Mugadi finally sat her KCSE in 2013, and joined the Kenya Institute of Business and Counseling for a certificate in counseling physiology in 2013. She enrolled for a diploma of the same course at the Pan African Christian University in September 2014.

In another case, Robai Musilivi Muiruri, 32, takes care of her husband, Martin Muiruri, 42, who suffer from primary progressive multiple sclerosis. Muiruri was diagnosed with MS in 2002. “I want to believe I didn’t listen carefully to the doctor because I thought he told me I had 10 years to live. So, I quit smoking and alcohol and got saved,” Muiruri says and laughs.

MS has different symptoms and what works for one patient might not for another one. There is also no known cure.

Muiruri has to sit composed at a ‘right angle posture’ to keep his body stable. When Robai asks him to sit upright, he says he can sense blood flowing down to his toes.

Robai is happy her husband can do most stuff on his own, except cooking due to her bad eyesight. “Despite his right hand being weak and that he can no longer wash utensils, I think the coming of a maid made Martin lazy,” she jokes.

Muiruri approves of his wife’s support, but grumbles that she sometimes bullies him when he requests for her to hold him. Robai mostly insists on him using his own weight because it’s part of physiotherapy.

Muiruri got his crutch in 2010 when he got a relapse. To control his affected right side, he was put under Sh92,000-worth steroids and solumedron for six months.

Robai urges the government to include neurology in the curriculum and medical students to embrace the course, to stop misdiagnoses of MS patients, which worsens the condition. She also wants all caregivers to be accorded the necessary attention.

Muiruri presses his right hand’s fingers (one after the other) on the ‘bouncing’ oval-shaped muscle ball, which he was given by his therapist to keep his fingers fit. Robai is the secretary of MS Kenya, a Multiple Sclerosis support organisation.

Amina Abdulahi, 22, was diagnosed with MS last July. The third-year University of Nairobi Bachelor of Arts student says her eyes would fail her every time she sat exams.

“After an MRI, I went to see a neurologist who recommended to my mum that I should go for a lumbar puncture,” she says. The first born in a family of four girls says that she resolved to see another neurologist not only for a different opinion, but in fear of the so-said painful lumbar puncture.

She says that steroids gave back her ‘humanness,’ because she had tremendous energy; despite the side effects. Amina thanks her best friend Hajar Ahmed for support. Nelly and Robai also encourageg her and explain to her the strange MS symptoms on the MS Kenya Whatsapp group, even though they have never met.

Last February's was the second MS Kenya meeting she attended at the All Saints Cathedral, Nairobi. He has had several bouts of Bell’s palsy.

MS Kenya Chairman Kamau Kimani, 50, whose right hand fingers are not strong enough to write due to MS, says the organisation was founded in 2013 after talks with neurologists Prof Paul Kioy and Juzar Hooker, who helped mobilise their MS patients.

The father of two reveals that MS Kenya will mark this year’s MS Day on Sunday, May 29 (instead of the world-wide Wednesday May 25) to involve as many people as possible.

Prof Kioy says cases of MS have increased over the last 30 years. He receives about two MS patients every month. He says if the neurology post-graduate course is established at the University of Nairobi – where he lectures – the number of neurologists will eventually rise above the current 15 specialists who serve probably 10 to 15 patients every month.

“The cost of the available two disease modifying drugs was Sh200,000 per month, until we engaged the manufacturer to lower it to Sh90,000 per month,” he says.

The drugs help manage the disease but do not cure it.