Infertility: Why it's not solely a woman's problem 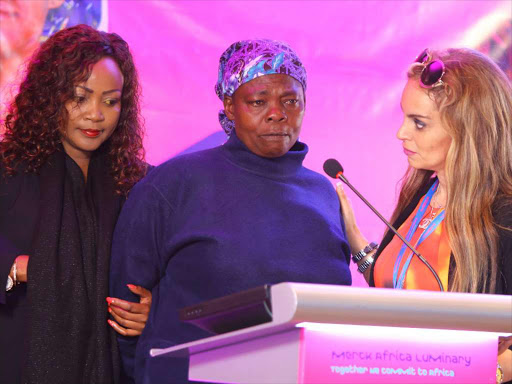 It is the hope of many couples to have a child once they tie the knot. Many times, however, this is not the case. Many people have had to wait for years, even decades, before they were finally blessed with a bundle of joy.

Society’s expectations make it even harder for a couple that’s struggling to get a child. Often times it is the woman who has a difficult time because many people believe that men cannot be infertile. Many women have confessed to having been ridiculed and shamed when relatives and even friends notice that they have been unable to conceive after a year or two of marriage.

Grace Kambini, 57, popularly known as Mama Chips, suffered this fate after nine years of marriage with no success in getting a child. She recalls the insults and torture that came her way when her husband’s relatives realised she could not conceive.

“Waliingia kwa nyumba yangu, hata chakula nikanyimwa kwa miezi mbili. Nikamuuliza bwana yangu kwa nini anakubali niishi kwa mateso hivi, lakini hakunijibu. (They came to my house and even denied me food for two months. I asked my husband why should I stay in a place where I’m suffering, but he didn’t answer me),” says Kambini.

After months of harassment and name-calling by her in-laws, Kambini decided to go to hospital to find out what was wrong with her. Her husband, however, refused to support her. His failure to support her however meant that she could not afford the fees the hospital was charging her, so she decided to return home without getting the help she was desperately searching for.

When Kambini started bleeding one day, she knew she had to go back to hospital. That’s when the doctor informed her that she had had an ectopic pregnancy, and had to undergo an operation, which she did.

On her return home, the reception was very hostile.Her in-laws continued mistreating her and hurling insults at her as her husband watched.

That’s when she decided enough was enough. Kambini moved out of her marital home to start a new life on her own. But due to the stress she had encountered in her marriage, she was diagnosed with appendicitis, high blood pressure and diabetes in 2004.

Elishiba Njoki’s story is a bit different from Kambini’s. Hers was a fairy tale wedding, she says. She got married to the man of her dreams with the hopes of getting four children. Her dreams were however dashed after waiting for three years to conceive but seeing no results.

“Ilipofika mwaka wa tatu nikaanza kuwa na wasiwasi, nikaenda hospitali kufanyiwa scan. Nikaambiwa sina shida. (I started getting worried, so I went to hospital to find out what was wrong. All the tests they did found that I had no problem),” she recalls.

Njoki says efforts to get her husband to go to hospital and get tested as well were futile. When she finally managed to convince him, they found out that he was the one with the problem. Njoki’s husband didn’t take the news well.

“Akaanza kuzurura. Mwaka wa 2006 tuligundua tuko na ukimwi. Nikaona maisha yangu imeisha hata nikataka kujiua. (He started sleeping around. In 2006, we discovered we were HIV positive. I thought my life was over and I even contemplated committing suicide,” says Njoki.

“Ile kitu ilikuwa inaniuma kabisa ni kama singekuwa na HIV ningekuwa na hopes za kupata watoto. Wale watu tuliolewa nao wamepata watoto, tukikutana nao nalia, najiuliza mbona mimi. (What hurt me the most was the thought that if I didn’t have HIV, I’d have hopes of getting children. Those people we got married with over the same period all had children. I used to cry when I met them asking myself why me).”

Her husband died in 2013. Because she had no children from the marriage, her in-laws refused to let her inherit anything from her late husband, saying she had no right. She left the home with nothing and decided to embark on her new journey alone.

Njoki met another man who had also lost his wife and decided to give love another try. The two got married even after she explained her situation to him. Luckily for Njoki, her new husband didn't care that she could not have any children or about her HIV status.

Referring to Kambini’s case, Dr Joy Noreh, an infertility expert and also the co-founder of the Nairobi IVF center, says it is wrong for women to get the blame when a couple is unable to have children. She says a man is also at risk of being infertile as was witnessed in Njoki’s case. As a matter of fact, Dr Noreh points out that contrary to many people's beliefs, infertility actually affects more men than it does women.

“Men are more affected than women. Although society thinks that women are the ones who are infertile, men are having infertility issues,” says Dr Noreh. “Research has even shown this.”

She points out some of the medical reasons for infertility in women. She says these include blocked tubes, which is the most common cause, anatomical issues, a certain abnormality, for example no uterus or cervix, hormonal imbalance including menopause, which can occur as early as when a woman is 28 years old, a hostile vagina and other unknown causes.

For men, the causes include blocked urethra due to infections, no sperms, low sperm count, abnormal sperm production, male hormones, anatomical factors, for example if one’s testes haven’t descended, vasectomy and psychological factors that may be caused by trauma, an example is if a man was sodomized when he was a child, he may be unable to erect during intercourse.

However, Dr Noreh says various treatment options are available for couples having infertility problems. She says those who have sought help have been able to get children.

Some of the options a couple has include hormonal induction for women with hormonal imbalance, intrauterine insemination, using the husband’s sperm or a donor’s sperm, for partners with no, or low sperm count.

“There are also ways where you’ll do IVF (Invitrofertilization), where you’ll use the woman’s egg, and her husband’s sperm. There are some women who have already hit menopause and therefore may need egg donation,” says Dr Noreh. She is encouraging women to try and have children by the time they are 36 years old, because their eggs may start to dwindle by this time.

For women who do not have a uterus because they were either born without one, had fibroids or lost it due to an abortion, they have an option of surrogacy. “In this programme, a couple rents another woman’s womb to carry their baby to term. The baby is theirs because we use the husband’s sperm and the wife’s eggs. We can also use a sperm or egg donor. The surrogate mother only lends her womb,” she explains.

Taita Taveta women representative Joyce Lay, who is also the Kenyan ambassador for Merck’s More Than a Mother Campaign, managed to have her child through surrogacy.

“It is sad when the woman is the one blamed when a couple doesn’t get children,” said Lay during a conference on infertility organised by Merck in November last year. “Why do we always put blame on the woman yet infertility is a shared responsibility? We have so many cultures and traditions holding us back.”

Lay says society should back off on a couple that seems to be struggling to have children because no one really knows what they're going through.

“In African culture, people get married and within a year, there’s a lot of pressure to have children,” said Lay. “This shouldn’t be the case; you don’t know what a couple is going through. And anyway, children are a blessing but not having one doesn’t mean a marriage is over. People should also remember that just because a woman doesn't have children, it doesn’t make her any less of a woman.”

Dr Noreh believes that the reason many people believe infertility is a woman's problem is because men aren’t free to talk about it, or don’t want to admit that they are the ones infertile in the relationship.

It is also very difficult to convince them to get tested. That's why she is encouraging couples to seek medical advise together when they discover they have taken a while to conceive.

"There are many times women are told by their husbands to go and find out what's wrong with them. Even at our centre, at times we've witnessed men saying they're not the ones seeking treatment, but with a calm approach they're accepting and coming to get tested with their wives," notes Dr Noreh. "And by the way it is actually cheaper when they come together and present their case as one. It is even faster and cheaper than when one comes alone."

Her advise to couples is to be alert if a year passes and they haven't been successful in conceiving.

"Your antennae should be up. What Biology dictates is that after one year of active sexual life and you're not pregnant, then seek the advise of a doctor to check what the problem is," advises Dr Noreh.

Kambini and Njoki echo the sentiments. Kambini believes that had she had the right information when she was younger, her problem would have been rectified enabling her to give birth and enjoy motherhood. She is still very sad that she had to undergo the trauma and torture, just because she wasn't able to have children.

As for Njoki, her advise is simple. She says whether you have children or not should not be a matter of public interest because a marriage consists of only two people, a husband and wife.

“Mzee wangu haniulizangi mambo ya watoto. Kama hamna mtoto endeni hospitali. Mkishaangaliwa, fanyeni solution yenyu mkiwa wawili, mkiamua mpange mlete mtoto hiyo ni sawa, lakini msiingiliwe na wazazi au watu wengine," she says. "Mtoto sio kitu ya kufanya usijipende, jipende kabisa. (My husband doesn't ask me about children. If the two of you don't have children, go to hospital together. After seeing the doctor look for a solution between the two of you, if you agree to get a baby that's fine, but don't let parents or other people get involved. Not having a child shouldn't make you hate yourself. Love yourself."

Lay says having children does not equate to being a woman, and adds that women shouldn't be judged or blamed because a couple does not have young ones.