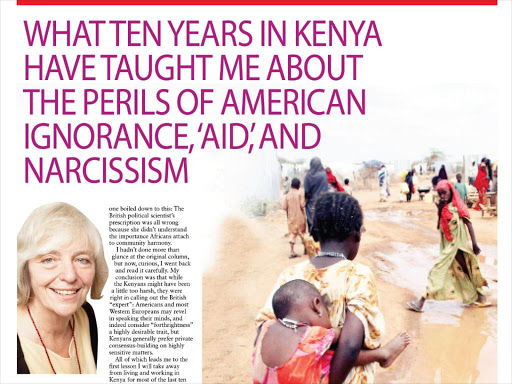 Karen Rothmyer's farewell article, as reprinted in the Star on July 11.

There are tutors who go through the motions of teaching and move on. Their days’ work is done after dictating notes and issuing handouts. And then there are those who don’t consider the lesson learnt until they make you get into the shoes of a professional, walk the talk, feel the pinch and learn to embrace it. A number of my former educators embody that, but none more so than Karen Rothmyer.

During her 10 years in Kenya up until June last year, Karen gave innovative academic and newsroom service. I met her eight years ago, when she lectured at the University of Nairobi. Missing a typical class meant three hours of notes to catch up on, but missing Karen’s class was like missing a lesson in life.

My mind drifts back to September 2007 at the Education Building. Karen turns up in business casual to teach us fundamentals of print journalism, a second-year unit. She has a whitish blonde bob of hair and ice-blue eyes. Top of the agenda are stories in the day’s newspapers, printouts of which she distributes.

Who “scooped” the competition? Which story “buried the lead”? Her voice is light, but the questions are deep. The next semester, in a business writing and reporting unit, she asks: How much? How many? But what she most likes answered is: how does it affect the common mwananchi?

After poking holes into published stories, Karen tells us to rewrite them on the spot for review in the next class. Backbenchers tend to groan at these assignments. “Time flies when you’re having a good time,” Karen tells them, tongue-in-cheek. Once, when a student with a heavy accent reads out a passage, Karen waits until he’s done and then says, “Can you put that in English, please?”

One day she screens The Constant Gardener for us on projector. The movie delves into the intrigues of an NGO making a lethal business out of medical aid. It provides material for our next essays, but beyond being a writing exercise, it sharpens our critical thinking.

Another day, she invites former Star business writer Peter Kiragu to give us some tips. He’s a sturdy, smartly dressed man. “An intro is like a door that’s left ajar,” Kiragu says. “You should give readers a view that entices them to walk in.”

The Anvil and Journalista, two publications Karen supported as a lecturer.

Karen is keen to see this quote high up in our report afterwards, but Kiragu’s closing remarks strike a stronger chord with me. “Some students struggle to come up with publications in university, and you think they are wasting their time,” he says. “Those are the people who end up succeeding in the media.”

Five classmates and I run a magazine I started in March 2007, Journalista. It’s a makeshift practice tool for our theory-ridden coursework. We’ve grown it from a spiral-bound newsletter to a fully fledged magazine, but getting adverts to maintain that standard proves harder than we thought.

In a last-ditch effort to keep Journalista afloat, we write a funding proposal to the administration in October 2008. I ask Karen for a letter of support. It’s several months since my last class with her, but we’ve kept in touch. I leave her sample editions and our “company profile”.

Karen notes that we have produced several issues over a year and a half, despite our shallow pockets and unprofessional editing. “Having seen many student initiatives founder after a burst of enthusiasm, I know that this team’s dedication alone is enough to set them apart from their peers,” she writes.

The administration, long unfazed by demands for missing exam results, doesn’t even acknowledge our proposal. However, Karen surprises me with a personal and unsolicited donation of Sh20,000. I ask her where I can sign for it and offer to fetch a receipt. “Don’t worry about it,” she says. “If you succeed, you can always pay me back later.”

Karen’s generosity extends to the defunct student newspaper, the Anvil, which she revives with similar financial impetus. Once, after ticking random names in our Sonu campus elections, I write a satirical report on this illusion of “comrade power”. Though I do it on impulse and just for fun, Karen talks me into submitting it to the Anvil, and it runs in the next edition. Later when I join a job market used to demanding prior experience, featuring in both student publications becomes the first thing on my CV.

Karen comes in handy in more unexpected ways as the 2008 Stanchart Marathon nears. I seek a publisher for a feature on the race, whose 21km category I’ve not just run but finished every October since 2006. I earned my first royalties in 2007 after a classmate from the magazine industry channelled my write-up to the editor, but the monthly has too many submissions to grant me the slot again.

So I turn to Karen, whom I’ve figured is affiliated with the Star. She suggests that I precede my account with a diary on my training. Then she introduces me via email to the Star’s features editor, who welcomes the idea. My stories are more sweat than glory, with bits of comic relief. Somehow, they get the attention of Stanchart Bank’s corporate affairs manager. She gives me an offer I cannot refuse: complimentary membership at the Hilton gym to help with my training.

The more I freelance for the Star, the more concerned I am about the occasional storm over a photo, cartoon, headline or story. In March 2011, Karen becomes the Star’s public editor, a first for not only the paper but also the press in Kenya.

In her introductory column, she cites decades of experience, ranging from The Wall Street Journal to The Nation (US). But it’s her earliest plunge into the trade that makes me wonder if maybe, that day I went to see her over Journalista, she saw a bit of herself in me.

“I first came to Kenya 40 years ago as a secondary school teacher in Kericho,” she writes. “Starting a school newspaper called Cheptenye Today is what led me to a career in journalism. So when I returned here a few years ago to teach journalism, it was in part to pay the debt I owed the country for that experience.”

As with her letter of support to Journalista back in the day, Karen is brutally frank in her assessment of reader complaints. Sometimes she says there was a lapse in editorial judgement; other times, that a decision was justified.

Karen retired in January 2013, having established the public editor as an indispensable position at the Star. She spends a few months at the Cambridge University, researching the significance of newsroom ombudsmen. Then she returns to advocate the role in other media houses in Africa.

Ten months later, Karen returns to America. It rattles my conscience when she writes from New York in The Nation: “When I first left Kenya, in 1968, I cried so much on the plane, not because I loved the country a lot but because I felt it didn’t love me back. I’m sure my departure will go unnoticed again, but now I’m fine with that.”

I write her and tell her nothing could be further from the truth, not after all the lives she has touched. Fellow former student James Mbugua comments on a rerun of her article in the Star: “Your legacy will carry on in our work and in the lessons we impart to others that we learnt from you.”