Disability, cancer didn't stop me from earning my PhD 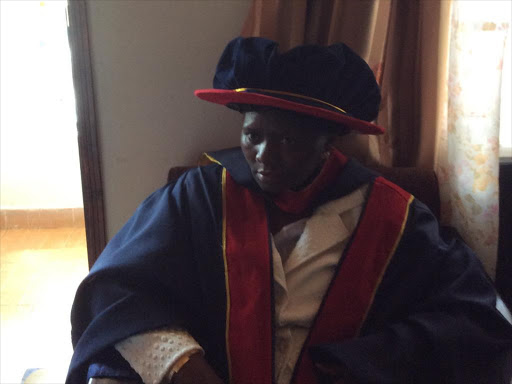 When Dr Getrude Musuvure Inimah was being conferred with a doctorate degree in Mass Communication at Jomo Kenyatta University of Agriculture and Technology 27th graduation ceremony, cheers filled the air at the graduation square.

The physically challenged cancer survivor had fought and won. To many, Musuvure, a mother of four girls, is a beacon of hope and source of strength. After surviving limb cancer that left her disabled, she was nowhere near to wallowing in self pity and giving up. The experience made her a strong woman ready to take the world by storm, literally.

Musuvure was born 49 years ago full of life in Nairobi as a fifth born in a family of eight children. She enrolled at a local primary school and joined State House Girls and Highway Secondary School for her secondary education. In 1989, Musuvure enrolled at the then Kisii College for a diploma in Education and later started teaching English and literature in secondary schools including Chebuyusi Boys, Matende Secondary among others.

When teaching at St Anjela’s School for the Deaf for two years, she realised that there were no text books for English for the deaf and it was quite a task for her to teach the subject without the necessary materials. Her stay at this school made her develop interest in special education. She enrolled at Kenyatta University, for a bachelors degree in education which a major in special education, and graduated in 1998 with a first class honours. It was a great achievement for her considering that she had a young family to take care of. “The main reason I returned to school to study special education was to contribute to the education of the deaf and the marginalised in the society. I had been in the classroom and seen the challenges,” she said.

Due to her outstanding performance, she was offered a job at Kenyatta University as a teaching assistant. In 2003, Musuvure enrolled for a masters degree in applied linguistics with a bias in sign language linguistics at Jomo Kenyatta University of Agriculture and Technology. She was later employed as a full time lecturer in the Department of Media and Technology at the same university.

Musuvure embarked on another mission in 2008. In an effort to bridge the gap that she had left at the classroom, she wrote English text books for the deaf. “I felt the need to bridge the gap so that it could be easier to teach English to the deaf. I wrote books for lower primary, upper primary and teachers’ guide for each. The four books were published by Jomo Kenyatta Foundation,” she said

She has also written an anthology titled ‘I speak for the Deaf’ that was published by LIBCAD Publishers. In 2010, Musuvure enrolled for a PhD in Mass Communication at Jomo Kenyatta University of Agriculture and Technology. All was going well in her life. Her children were doing well in school and her studies were going on well until one mid morning in 2013. After a thorough checkup at Karen Hospital, she was diagnosed with bone cancer (plemorphic sarcoma). “The news hit me and my family hard. I knew I was seriously unwell but I didn’t think I had cancer. I was devastated to say the least. I had to stop everything and seek medication as quickly as I could,” said Musuvure.

Karen Hospital was not able to treat her and she was referred to hospitals in Europe, India or South Africa. Dr Musuvure chose a hospital in India. She needed a lot of money for the treatment and her colleagues, employer and family came to her aid. However the money was not enough and she had to agree with her family to sell some property.

Musuvure started the long journey to treatment in January 2014. She was admitted at a hospital in India and was shortly booked for a limb saving surgery operation at the hospital. During the operation, part of the pelvis was removed and the femur was replaced with a hemi pelvic prostheses. She stayed at the hospital for a month and came back in February 2014. “That one month was the longest time of my life. I was in a lot of pain, I worried for my children, and I feared I might die. But God kept me strong. I kept my faith and hope in God,” said Musuvure.

After that major surgery, she became physically disabled.

She now uses crutches to support the leg affected by the cancer.

She had just started working on her PhD thesis when she became sick. Just a few months after being discharged from hospital, she resumed writing her thesis and took light duties at work. In September the same year, Musuvure was already lecturing in her crutches. “I needed to keep myself busy and strong to avoid worry. I went back to class to teach and encourage others that it doesn’t matter what happens to you, what matters is how you respond to what happens to you,” she said.

Musuvure was appointed the vice chairman of National Council of Nomadic Education in Kenya. “This is a newly constituted council led by an ambitious acting CEO Elius Abdi and able members who I know will spearhead in championing education of the marginalised and vulnerable nomadic child,” she said.

She has also registered a foundation, Living Beyond Cancer and Disability Foundation. Her goals are to inspire, motivate and mentor people with disability in Kenya and to influence the society to change its perception about disability.

Through her foundation, Musuvure has published books, made a documentary about her battle with cancer and disability. She also visits patients at Kenyatta Hospital as well as campaigns to raise awareness on cancer. “We have not found partners to help us in our activities but we have hope that going forward we shall be able to do more,” Musuvure added.

Despite her disability, Musuvure drives herself. “I am learning to become independent as I was before the disease struck me and I like the progress I have made so far.

However I usually have trouble when accessing buildings and washrooms that are not disability-friendly.”

About her future plans, she said, “I want to be in a position of more influence in regard to fighting for the rights of the disabled, and to mentor and inspire as many people as I can. I want to see a society that is friendly to people with disability because it will help break the poverty cycle among the disabled. God gave me another chance to life and I want my life to be worth living”.

And if the confidence in her voice is anything to go by, no doubt Musuvure is on the path of achieving great success.