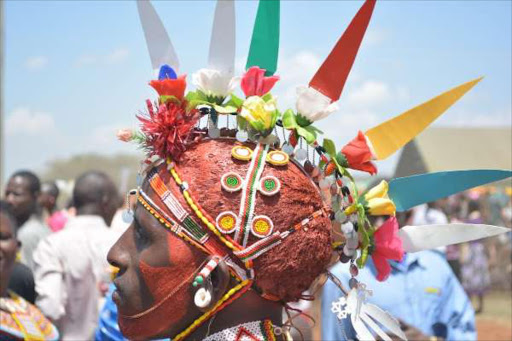 The Maralal Camel Derby has gotten regional and international recognition for its uniqueness and cultural attraction. The 26th edition of the event took place at the Yare Camel Club in Maralal over the weekend and it has brought together visitors not only from the country but also from overseas.

According to the Samburu governor, Moses Lenolkulal, the event was tied to the conservation efforts in the county.

“We have integrated the derby program with the conservation efforts within the county by merging the local community set up and wildlife management,” he said adding that the derby goes further to bring peace and cohesion between communities in the region and to help deal with issues such as banditry, cattle rustling and poaching.

The integration of cultures is quite visible as the morning before the derby, there was a series of weddings that were taking place. It is a part of the derby for these weddings to take place as it allows members of the community who were not able to perform cultural rites before living together as man and wife.

According to Ngilisen Nankupai, a man has to kill a bull in front of the bride’s home to be able to formalise the marriage.

“In Samburu culture, there is no divorce. You can separate but you are still married to each other. The woman can get children by other men but is still considered the official wife of the man that killed a bull,” Ngilisen says adding that a bull cannot be killed twice.

Once a woman is married, she is able to put the long chain earrings to indicate her status in the community. Without this, a woman is not really are not considered married and cannot even take part in some of the rites and rituals such as circumcision or even get milk from the household.

The man is required to bring the bull to the bride’s house as per tradition. He also needs to bring bride price and sheep to the bride’s mother as gratitude for feeding and taking care of the bride. In the evening, the groom will present a cow to the father in law.

On such an occasion, the county provides the bull for the “unmarried” men to help them became “husbands”, it does not matter that he has lived with the same wife for many years before and has had children with her.

Kakato Losoipa was the lucky man this year. Adorned in the traditional clothes- a blue and red checked shuka, complete with red ochre on his shaven head- he brought in a young bull and a sheep to the girl’s homestead- a makeshift homestead at the derby grounds. Helped by his best man and other men, he presents the sheep to his mother in law and then prepares himself to slaughter the bull.

The bull is laid on the ground, in a specific way as per the culture. The groom is then required to pierce the bull in the head and let it bleed out until it dies. Afterwards, the bull is then placed on some leaves and the men help in skinning it and the meat is then shared out to specific households. All this time, the bride is in the manyatta waiting for her time to leave and join her husband.

“The bride and the groom will not eat any piece of meat from this bull,” Ngilisen says, and adds that the meat has to be taken into the house before the bride could come out.

The men then take out the meat and cut it lengthwise to create some sort of rope, which will be taken in the house by the groom and his best man. The two hold one end of the meat, and the other end is held by the mother-in-law and her companion at the entrance of the house. The four will then get in together.

On the eve of the event, the camels are usually checked and verified as fit by the county veterinary officer, Daniel Macharia. One by one the camels are brought to the doctor, who checks them for a variety of things, including their demeanour, skin condition, diseases such as camel pox, mange and ticks, and body systems.

“Since the inception of the derby, we deemed it necessary to examine the animals before the race so that they can show their full potential,” says Macharia, adding that most camel keepers are keen on the health of their animals and do not wait until the event to have them checked.

Over the years, has only stopped one or two camels from participating from the event because of their health.

“This year, I have only let go of one animal because of the skin condition,” he says. The animal in question had a huge black spot on its back. He adds that the farmers screen the animals and only choose the best for the race, and this has made his work easier and faster.

On the D-Day, all the animals declared fit will be fitted with the right gear for the riders. One by one, the riders together with the camel handlers will head to the starting point. The amateur race would be the first. This attracts a lot of people- foreigners especially, who get to experience a ride on the camel from the Yare club to Maralal town and back.

As the race went on, the rest of the population enjoyed a fun family day with the children playing on swings, roller coasters and train rides. On the sidelines were cultural dancers entertaining the crowd as they wait for the winners to arrive.

While Maralal has been known for the camel derby, there are also other points of attraction.

Located within Maralal town is Kenyatta House, named after the first president Kenyatta. The colonialists placed Kenyatta under house arrest in this house for one and a half year after being jailed in Kapenguria and Lodwar. He lived with Mama Ngina and daughters Jane and Christine. The three bedroom house is still well kept and has most of the original artefacts, from the sitting room chairs, to the beds and mattresses and even the old school wood oven in the kitchen.

According to the curatorial assistant, Phillip Letunda, the founding father was able to interact with the locals and even attend his children’s school events.

“He was not allowed to talk to more than 10 people at a time and was followed everywhere by his guards,” Phillip says, adding that the mau mau was still a threat and the colonialists were not comfortable with Kenyatta associating with a lot of people.

One of the key features in the house was a phone that he used to call only two people: his doctor when he had health problems, and the colonial administrator for political issues.

“You know the negotiations for independence was done in this house,” Phillip adds.

The house also bears photos of the former president in town with his cobbler, Wanyiri Kimumuri, and reading a book in his house in 1961. Aside from this, the house is also famous because it was where the current president was conceived.

“Mt Kenya is visible from the house especially on cloudless days,” Phillip tells us.

The house, which gets about 200 visitors a day, both locals and international guest, was gazetted in 1972.

Close to the Kenyatta House is Maralal Game Sanctuary. Home to gazelles, impalas, zebras, baboons and monkey, the sanctuary has a lodge where guests can get accommodation, food and drinks.

The highlight of the sanctuary was the two leopards that have been hosted since they were captured from the northern part of the county. Lesoro (Samburu for wild) is one years old while Naten (Samburu for faster) is six months old.

“Lesoro was being kept by herders but upon discovery that it was being tortured, one of the conservancies went and rescued it and brought it to the sanctuary,” says Justus Lesanjol from the county’s department of tourism, adding that they are in the process of getting a license from Kenya Wildlife Service to keep the animal in the right habitat.

“We are also planning to set up an animal orphanage in the county so that animals rescued from here do not necessarily go all the way to Nairobi,” he adds.

Guests can be taken around the sanctuary on a guided walk to encounter animals like warthogs and gazelles. The walk also encompasses a climb on a series of rocks before getting back to the lodge for a refreshing drink.

The county government is in the process of reclaiming the bush in and around the sanctuary by planting trees, and guests can take part in the process as well.

The sanctuary has guards that walk around to check out on animals and the snares set by poachers and hunters.

“In June alone, we captured 22 snares,” he said adding that the most recent was a snare that ripped off the skin on a zebra’s hind legs, and with a noose around its neck. They managed to rescue the zebra and saved its life.

With the reafforestation of the sanctuary and the future plans, things are looking good for Samburu County.

About 36km from Maralal town is a view point from where you could see the a slice of the rift valley. With the largest vertical drop of 6600 feet, Malasso is a picturesque landscape that displays the Suguta Valley, and the hills that show the borders of Samburu County with Baringo and Turkana counties. On a clear day, a tip of Lake Baringo is visible in the distance.

According to the manager, Mark Letowon, the area is a favourite of many tourists. But the clashes of 2006 led to the reduction of tourists. The clashes was between the Samburu and Pokot communities over natural resources.

“After the clashes, we decided to choose peace and it has worked for us,” our guide Joseph Lekesike told us.

“We now co-exist peacefully and we are even able to take tourists down to the escarpment and all the way to the “two towers,” he adds referring to two natural towers at Nataruk Hill in the valley that is home to vultures.

The two towers is also in the bird migratory corridor for all types of birds including crows and swallows.

“The old birds rest at the lowest level of the tower and the younger birds go away to hunt and bring them food,” Lekesike adds.

The escarpment is not accessible using road, so tourists go on foot and a donkey is available. The journey takes four days as the tourists camp at specific areas along the way.

Some of the animals one can encounter in the escarpment include lions, leopard, warthogs, wild pigs and the lesser and greater kudu. It is also home to about 5000 species of birds and 300 snakes.

Aside from the long trek, tourists can also carry out activities like bird watching and paragliding.

At the gate, tourists will be charged an entry fee of Sh400 and camping fees of Sh500 per night. The site does not provide tents, therefore you need to carry one and come with your own supplies including appropriate clothing.

“One of the main challenges with the camping is the heat. It can get to 45 degrees and the lowest is 26 degrees. Even on a rainy day, it could be really hot,” Lekesike adds.

The Malasso conservancy together with the county government are planning to construct a restaurant on the hill.