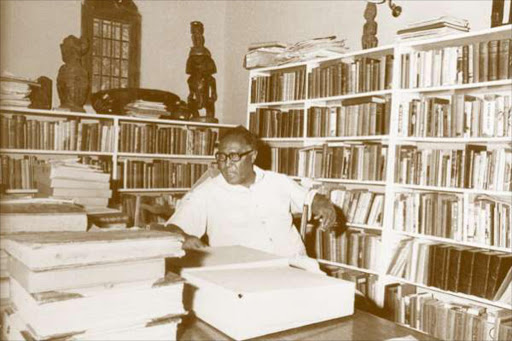 Murumbi in his library

Title: A Path Not Taken

Some 25 years after Kenya’s second vice president Joseph Anthony Zuzarte Murumbi passed on, his autobiography is finally out.

If ever there was an enigma in Kenya’s political history, it would be Murumbi. An inseparable component of the freedom struggle, he confounded many with his nonconformist style and his abrupt departure from politics less than a year into the vice presidency.

Published by the Franciscan Kolbe Press, A Path Not Taken reads like one long dialogue because it is a collection of interviews conducted by Ann Thurston, an American historical researcher. Thurston worked for a time at the Kenya National Archives, which Murumbi started when he was vice president, and helped catalogue his personal antiques collection. Murumbi had been putting together his memoirs over the years but due to ill health, was unable to publish them.

Produced by the Murumbi Trust, the book begins with Murumbi’s early life in reprints of articles that first appeared in a 1979 issue of Kenya Past and Present, a publication of the Kenya Museum Society. There are recollections from Murumbi’s childhood such as riding strapped on his mother’s back, his father’s rose garden and the tailored woolen suit he wore to school in India where, in later years, exposure to the caste system stirs his first political consciousness.

A child of two heritages in a segregated colonial Kenya, Murumbi elucidates how his Goan father influenced him to choose his mother’s Maasai heritage and name, henceforth renouncing any rights to his Asian nationality.

On the other hand, his entry into pre-independence politics happens quite by accident not long after his return from Somalia in 1952 where he worked with the British Army. From a chance meeting with the slain nationalist Pio Gama Pinto to gradual involvement with the Kenya African Union (KAU), where he meets with future president Jomo Kenyatta, Murumbi was suddenly thrust into the heart of nationalist politics when he unexpectedly landed a party position following the detention of KAU’s secretary general.

The book delves into the pre-independence struggle recalling events during the State of Emergency and the Kapenguria trial. Countless politicians from the past are featured in the book — Achieng’ Oneko, Bildad Kaggia, W.W.W. Awori, Walter Odede, Mbiyu Koinange and colonial administrators such as MacDonald, Baring ‘the butcher of Kenya’ and others. The Oginga Odinga-Tom Mboya rivalry is examined and Murumbi candidly reviews the personalities with whom he interacted with, neither stinting in his praise nor mincing his criticism as the case may be.

Managing somehow to retain his Indian passport, we follow Murumbi’s extensive international travels at the behest of Kenyatta, to publicise the brutalities of the colonial regime and raise money for KAU. Eventually banned from Kenya he seeks asylum in, most ironically, the UK where he finds political support from the Labour Party and meets a librarian, Sheila Kaine, who eventually becomes his future wife.

Murumbi’s character as a natural networker emerges as he interacts easily with famous and ordinary people. During his nine years of exile he builds up his diplomatic and press skills while working at the Moroccan Embassy. He offers background support to KAU during the Lancaster House Conference in London where a chance declaration by Ian MacLeod, Secretary of State for the Colonies, sets Kenya firmly on the road to full independence.

A cosmopolitan individual by the time of his return to Kenya, Murumbi is appointed the first Minister for Foreign Affairs in a ministry that he practically creates from scratch. He seems to have had an extraordinary amount of free rein in his work and although he consulted directly with Jomo Kenyatta, he claims that the president was not much interested in foreign affairs.

Displaying exceptional insight of regional and global geopolitics during the Cold War years, he describes international incidences such as the Zanzibar revolution, the Congo Crisis and the ‘Winds of Change’ speech by British Prime Minister Macmillan that heralds independence for many African colonies.

For all his insightfulness on foreign matters, Murumbi appears to have underestimated how much he infuriated the Americans and British with his maverick style of managing Kenya’s foreign policy, refusing to be influenced by either of these nations. His eventual punishment, being shunted off to the VP post by a Kenyatta under pressure from the two countries, came as a surprise.

As regards the first president, Murumbi acknowledges a close interaction and loyalty to the ‘old man’ who twice appoints him as acting prime minister. At the same time, he expresses disappointment in the change he sees in the president as he assumes more and more power.

On reasons for quitting the vice presidency, not much is told that wasn’t already known: emerging corruption, the crumbling of pre-independence values, Kikuyu domination and, ultimately, the shocking death of his close friend, Pio Gama Pinto. The roundabout manner in which Kenyatta finally releases Murumbi from his post makes for interesting reading as does a touching letter from the president accepting his resignation.

On the assassinations of Pinto, Mboya and JM Kariuki, eyebrows are distinctly raised in the direction of the political class. Murumbi states he will reveal the truth, as a matter of duty, in his book but as fate would have it, he never managed to write his book.

Murumbi reflects on varied national matters including the Indian attitudes in Kenya, the dilemma confronting the pastoral Maasai, and land issues facing disenfranchised communities across the country. He is almost prophetic in warning of potential civil strife should matters remain unresolved.

Little is revealed about his extended family on either his mother or father’s side. A brief mention is made of a step-brother and step-sister in India. From an interview with Fitz De Souza, one of the three Asian lawyers that represented the ‘Kapenguria Six’, we learn of Murumbi’s first wife, a Somali lady, and of the only child he sired.

Thurston reveals that Murumbi was reticent on personal matters. “There were a lot of things that Joe didn’t feel comfortable talking about and I think anything very personal wasn’t his wish or his intention to discuss these things.”

Concerning Sheila, his better-known English wife, there are warm remembrances of shared interests and happy times in their Muthaiga mansion and the country manor in the Trans Mara. Amusing moments are retold, such as falling asleep and snoring loudly at public events or trying to find a suitable hiding place for a huge stash of cash donated in support of the freedom struggle.

Following his resignation from politics, and without a backward glance, Murumbi goes into private business and follows the path to his next greatest passion — African art and heritage. Beginning in his London days he describes the decades of gathering rare books, old stamps and African artefacts into a private collection that has repeatedly been described as unmatched elsewhere. A staunch supporter of African art and artists, he and Sheila co-found the African Heritage gallery with Alan Donovan which becomes the premiere retailer of African cultural and modern artwork.

Waxing lyrical, Murumbi discloses his dream of converting his Muthaiga house into an African Studies Centre and of selling his collection to the government as he believed it rightly belongs to the Kenyan people and not overseas collectors. Years later he makes the appalling discovery that his former house was allowed to decay and was eventually demolished by developers, and that the priceless artefacts were stored in unsuitable conditions at the National Archives.

Close friends believe this shocking betrayal is what tipped the already frail Murumbi into the grave in 1990. “I think that he was treated very badly and he died a very broken man,” says Donovan.

The autobiography might never have come to pass were it not for the efforts of Donovan to track down the various manuscripts. “He always intended to write a book about himself but he never got time to do that because of what happened to him,” says Donovan.

A Path Not Taken has a scrapbook feel to it from numerous press articles, posters, letters, and the collage display of photos in between the interview notes. The autobiography lacks an overriding theme but Murumbi’s character and ideals are what tie together the disparate notes.

Murumbi was a non-tribalist, who proudly embraced his Maasai and African heritage. He was a nationalist to the core but a moderate politician, an African patriot both in politics and the preservation of cultural heritage, and a straight talking man not afraid to do the right thing no matter how at odds with his contemporaries.

What is debatable is whether he gave up the political path too easily or he was just too principled a man and disinterested in power to engage in the political machinations of the day.

One is left wondering the sort of country Kenya might have become had Murumbi persevered and possibly become the second president of Kenya. Nonetheless, his involvement in the freedom movement was invaluable and his singular contribution to cultural preservation remains unforgettable.