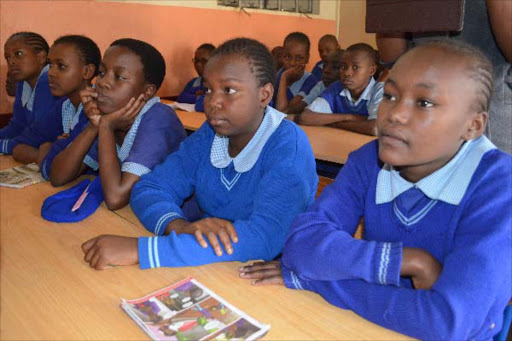 Members of the Wangu Primary School Entrepreneurship Club pay attention as a guest, the CEO of Hand in Hand, Pauline Ngari, talks to them about entrepreneurship.

As the Global Entrepreneurship Summit starts in Nairobi on Friday, a school in Nairobi’s Dandora Phase 2 already has its sights on moulding entrepreneurs at a tender age.

It is hoped that the training the pupils of Wangu Primary School are receiving will enable them to be creative and innovative.

Winifred Wangeci, in class eight, is a member of the entrepreneurship club and also the Treasurer. She’s already mastered the art of making liquid soap.

“I was eager to join the club after hearing other pupils talking about it,” she says. “So I did research and joined it in July 2014. I learned some skills and so have others.”

Apart from soap-making, these pupils have been shown how to make disinfectants and yoghurt. “We also make mandazis everyday,” Wangechi says. “There is very good market in this school. Even teachers promote us and our mandazis are of good quality.”

As a result of this club, “I have come to know that I can be trusted,” Wangeci says.

She believes the club has imparted upon her teaching skills and courage because she has the ability to demonstrate practically, even before groups of onlookers, what she can do.

“I make detergent for my mum every Wednesday. I teach other children in our neighbourhood and they are really going on well,” Wangeci confidently says. She knows the names of the chemicals required and buys them herself or accompanied by her mother.

Miriam Kitonga is the secretary. Like Wangeci, she became eager to join the club after hearing other pupils talking about it. “I decided to consult some teachers.”

She told them why she desired to join the club. “I used to be sent home because of lack of money for the feeding programme. We earn some money in the club. This is one of the benefits.”

“As entrepreneurs, our role model is Mandela. He wanted to change the whole world. He started with where he was living, South Africa,” she says. “He changed it. Then he went to the community, which he changed, the country, and now he has changed the whole world.”

“We want to change the whole world,” Kitonga says. Their school is just the beginning of this major step they are dreaming about. “We are proud to be entrepreneurs and we’re girls and boys of integrity.”

Like her colleague Wangeci, Kitonga has taught her mother how to make soap. “She sells it. She has taught others how to do it and I’m proud of that,” Kitonga enthusiastically says. She’s the only child in their family. “When I grow up, I’d like to be one of the greatest business women.”

The chairman of the Wangu Primary School Entrepreneurship Club is a boy, Francis Ndung’u. The other four officials are girls.

“We teach life-skills,” says the head teacher, Christine Mutua. The school intends to have “all-round learners to engage in various activities”. They engage in these activities every Wednesday at 3:10 pm.

“These children in the entrepreneurship club are practising saving,” Mutua says. “They have a bank account. This trains learners to be savers quite early in life.” The money raised by the club supports the school in a number of ways including buying uniform for the needy children in the club.

Class eight teacher Judith Achieng’Gumba is in charge of the club which has 62 members; 32 girls and 30 boys. “We do catering. If any class has a party, they invite us to cook for them. They pay us for our services. The money we get is used for our school feeding programme for our members, where we pay half and parents half.”

Through such activities, this school has devised ways of keeping learners in school. Even parents are not left out. “We also teach some parents to make some of the items we do so that they too enjoy some of the fruits of labour of their children and the school,” Gumba says.

This is the second entrepreneurship class. The first graduated last year equipped with various skills.

The club’s members are drawn from classes four to eight. A boy and a girl are picked from each of these classes, “because we don’t want any class to be left out,” stresses teacher Gumba. Five teachers are directly involved with the club.

Children from less fortunate families are not neglected by the club. “We encourage them to know that out of their own hands and brains, they can be people to be celebrated.” Making mandazis is the most popular activity.

Gumba says sometimes the school invites guest staff from an NGO, Hand in Hand Eastern Africa, to instruct them on how to sharpen their entrepreneurial skills.

“Our focus as an institution is entrepreneurship development,” says Pauline Ngari, CEO, Hand in Hand Eastern Africa. This is a pilot project. “It is very important to inculcate entrepreneurship within the country and we thought that the entry point at the primary school level would be very helpful.”

When these children are in school they have very high expectations. But when out, they realise there are no jobs. Ngari believes entrepreneurship can spur job creation and alleviate poverty.

The school makes soap because it is a very important component in a household. “Our next step is on innovative entrepreneurship. Our training focuses on spotting business opportunities. We are encouraging young people to go for agriculture and livestock.

The NGO is working in partnership with Feed the Children and this is how Wangu Primary School was identified for this pilot project. Ngari hopes to roll out such ventures to other schools and ultimately cover at least two schools in each of the 47 counties.

Ngari seeks to work with the national and county governments very closely, in preparing these young people psychologically and mentally, by imparting upon them skills to appreciate entrepreneurship.

Time is the biggest challenge for Judith Gumba. She reports by 6am and may remain until very late. “My biggest joy is that there are some children who at one time stayed home for even a month because of lack of money for the feeding programme,” the teacher recollects. “But now, they are with us. They no longer go home because we pay for them.”

Sometimes the school engages parents who make for them some of these items, which they sell. According to Gumba, it’s only Wangu Primary School that has this kind of club probably in Nairobi and the country at large. The club was started in June 2014.

There are 37 teachers at this school posted by the Teachers Service Commission. Three care for the hearing-impaired unit.

Last year the school took almost 30 children to national schools. The first girl who went to Starehe was the chair of the entrepreneurship club. “It doesn’t mean that if you’re involved in extracurricular activities you can’t excel in academics. In fact I think the more active you are, the better for you,” the head teacher, Christine Mutua, says.

“If you have hands and brains, use them to better everyone’s future,” Mutua concludes.