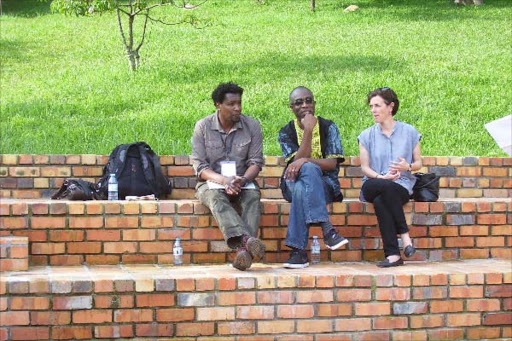 Mukoma wa Ngugi, Ikhide Ikheloa and Michela Wrong talking about transition from a journalist to a non-fiction writer.

Literary festivals are always something to look forward to. One gets to meet their favourite author and listen to their experiences and the inspiration for writing their books or poetry. This is what happened at the Writivism Festival in Uganda last week. For five days, Kampala was abuzz with literary activities and sessions.

The first session was on how to transform from a journalist to a non fiction writer. On the panel was Mukoma wa Ngugi, Ikhide Ikheloa and Michela Wrong famed for It is Our Turn to Eat.

According to Mukoma, as a novelist, poet and activist, his choice of media is dictated by the message. He asked authors to push themselves and write outside their comfort zone.

The question of social media and its effect on book sales was an issue Ikhide talked about in length. He recognised that boundaries are being broken, and that social media is fascinating because the interaction between the author and his/her audience is instantaneous. According to him, the only problem with social media is the lack of archives.

For Michela, her transformation from journalism to non fiction was very unprepared. Her journalistic history helped her in writing and researching for her first book. She asked writers to make sure their books are readable and have been adequately researched on. She also acknowledged the interaction between the different forms: poetry and prose.

What is an African writer? This question has been seen as controversial because it seems to confine people into a certain box.

According to Mukoma, what people are trying to communicate with the statement is what matters, as there is really nothing wrong with being an African writer. He asked the audience to go back into history and look at the beginning of African writing, starting with the South African writers who wrote in their local languages. The acknowledgement that African writing has many identities will help readers and critics not look at it like a monolithic structure.

The rise of technology and writings about it has been an interesting development over the years. This gave rise to the question of speculative fiction and Afro sci-fi. The panel consisting of Rachel Zadok, Edwige Dro and Jalada’s Moses Kilolo, engaged the audience in the role of the author in writing such fiction. According to Edwige, it is the writer’s role to understand the concept of “juju” to be able to put it into Afro Science fiction. They should also take the concept of science fiction from different parts of the world and give it an African setting. For Kilolo, the categorisation of a story in different groups would be unnecessary because a story is just a story.

The politics of language also arose in the clarification about what Afro futurism is. Why is it called “witchcraft” when it is from Africa and science fiction when it is from the West? According to Zadok, the use of speculative fiction has also been to make commentary on issues that affect the continent, including the racial tensions in South Africa.

The question of publishing and accessibility of books in and across African countries became an important point of discussion on speculative fiction. There was a call for collaboration between different artists of different genres to ensure African literature is available in various forms and languages to penetrate both the literate and illiterate sections of the society.

The lack of a bridge between Anglophone and Francophone literature was explored during the panel discussion ‘Breaking down the Francophone and Anglophone walls’ with Edwige Dro and Ndinda Kioko.

It was revealed that most Anglophone writers do not know about their Francophone counterparts and vice versa. Most of them do not even know the existing levels in these writings. The gap in these types of literature was blamed on translation, which is not available and quite expensive when it is.

While translation of books was fronted as the best option to bridge this gap, it came with the disclaimer that there is no faithful translator. Richard Ali added, the translator is a person cultured in a language and must have the ability to not only get that culture but also get into the mindset of the original author to be able to keep his/her sentiments.

This view was also shared by Tsitsi Dangarembga, who questioned the type of translation, because it will take away the “packaged experience” that the book in the original language offered.

On the concept of language and inadequate sources of books in African languages, Ndinda talked about the socialisation that English is a superior language, as indicated by the punishment in primary school that involved walking around with a heavy disk on your neck for speaking in any other language except English.

From the discussion, it was apparent that there is a need for a workshop on translation as well as the publishing of translated work.

The distribution and marketing of such work should be encouraged so the demand for them is met. Such failure in distribution is attributed to the fact that publishers believe that Africans do not read and that Africa is divided into different markets instead of looking at it as one common market where they can send books from their own countries to other African countries.

They only opt to send the books to the western countries.

Nigeria is considered a literary bigwig in Africa, with most of its citizens winning a number of regional and international awards for African writing.

A session on Nigerian literary conversations sought to unravel the literary giant. Micheal Afenfia, Saddiq Dzukogi and Onyeka Nwelue talked to Richard Ali about it.

The three encouraged writers to find and keep their own voices as this sets them apart from everyone else. Thus, they will not be compared to others or confined to a box. What makes Nigeria tick is the choice to get their work out to the market.

The audience also got to learn how to sell their fiction in conversations with Jagero Koa and Ciiku Kimeria, authors of The True Citizen and Of Goats and Poisoned Oranges respectively.

Both of them are self published authors, who talked about how to be shameless in talking about their books and in self promotion.

Sex and its representation in African literature took centre stage in a panel discussion with Nana Darkoa, Stella Nyanzi, Kilolo and Zukiswa Wanner. The line between pornography and erotica was discussed and the panellists told their experiences in writing erotica and the kind of response they have received from the public. Kilolo talked about the stories they received for the Jalada Sext Me issue and why they considered some of the stories too ‘safe’.

Donald Molosi from Botswana performed a play on the life of Ugandan musician, the late Philly Lutaaya. Lutaaya was one of the African musicians to reveal he has been suffering from HIV. He spent the last days of his life creating awareness of the condition.

Molosi went on to talk about his preparation for the role and how he had to live in Uganda to be able to get the experience but also get the Baganda intonation right.

Dangarembga spoke of the concept that women are taking over literature in Africa while Makumbi spoke of historical novels and its role in literature. Mukoma addressed the future of African languages and John Nagenda sought to find out the place the writer in politics.

Aside from the panel discussions and keynote addresses, there were master classes where participants learnt about blogging, editing and sending stories to newspapers, writing non-fiction, applying for the Miles Morland Foundation Scholarship, playwriting, writing for social justice and literary criticism.

The festival ended with the announcement of Pemi Aguda as the winner of the Writivism short story competition for her story Caterer Caterer.