A Mother's Journey with her Autistic Son 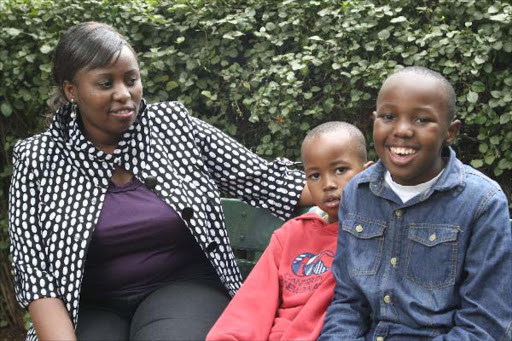 Ian Munyao (right) who is autistic belts out a tune. His six-year-old brother Jeremy Ngugi and his mother Esther Mungui look on.

Eleven years ago, an elated Esther Mungui became a mother for the first time. As she held her newborn son Ian Munyao in her arms, she, just like any new mom, was filled with pride and joy. At home, Ian continued to grow as a healthy, happy and bubbly boy.

However, when Ian was about 18 months old, his mother noticed that he had not yet achieved some of the milestones other children his age had. For example, he still could not stand on his own.

A concerned Esther sought her friends’ opinion about it.

“They told me not to worry, that boys usually achieve their milestones later than girls. I heeded their advice and besides, Ian’s legs appeared normal without any visible deformity, so I relaxed. I knew it was just a matter of time before he would walk on his own,” remembers the 33-year-old mother of two.

But she would have to wait a little longer, for Ian eventually took his first step after his second birthday.

But while his delayed walk did not worry her much, something else did: his speech. While other two-year-olds were able to put together two-word phrases, Ian was yet to utter a single word. In addition, Esther noticed that Ian would never look anyone in the eye when being spoken to.

“His lack of speech and inability to maintain eye contact caused me great worry,” she says.

As he grew, she also noticed that her son was never able to stay at one place for more than a second.

“He would always shift from place to place, as though he were allergic to keeping still. He would always express himself violently when angered — where he would bite, hurl items at people, or bang his head against the wall. I knew something wasn’t right about him and decided to take him to a doctor,” she says.

At the hospital, the diagnosis for Ian’s condition was quick.

“After examining him and asking me a few questions, the doctor casually told me that my son was autistic. He then gave me a prescription and told me to keep Ian away from milk and wheat products, before sending me away. I had never heard of autism before and he didn’t bother to explain it to me. He did not tell me if the condition was curable, contagious or life-threatening. He simply moved on to the next patient,” she remembers.

Back at home, Esther gave the prescribed medication to her son. And indeed they worked, for he stopped his hyperactivity.

But there was a problem.

“The drugs would make Ian sleep all day long. He went from being hyperactive to sedentary. Ian would even refuse to wake up to eat or play. I stopped giving him the drugs for fear that they were damaging his brain,” she says.

But immediately after withdrawing the drugs, the hyperactivity resumed.

“I lost count of the number of hospital trips we made because of injuries he would suffer from his hyperactivity — his running around without much forethought about underlying dangers, or from his fits of anger where he would hit himself against hard items. Ian was always nursing one bruise or another on his legs, knees, hands, face, chest; everywhere in his body,” she says.

At the age of three, Esther decided to enroll Ian in a kindergarten, hoping that he would calm down after observing his peers’ behaviour. She also hoped that he would develop the ability to speak after interacting with his agemates.

But things did not work out as well as she had hoped.

“After just a few weeks of school, the teachers told me I needed to withdraw my son from their school. They said he was unruly, uncultured and would always disrupt class by his tantrums. They said Ian was uncontrollable and asked me to find another school for him,” she remembers.

Fearing the same would happen in the next school, Esther decided to try the home-schooling option. She identified a special needs education teacher who could work with her autistic son.

“The teacher would come home three days a week and spend time with Ian, giving him specialised education according to his needs. Ian soon learnt how to keep still and obey instructions. He also learnt how to maintain eye contact — even for a brief second — something he had previously never been able to do. He was now also able to hold a pair of scissors, cut paper and undertake other simple but yet significant projects with his hands. He was home-schooled for two years,” she says.

But even with the good results, Esther felt as though there was a missing component in Ian’s life. He was very antisocial, prompting her to enroll him in a regular school which would allow him to develop social skills with his agemates.

But his education in a regular school has not been an easy journey. He has been to five different schools so far.

His mother offers an explanation for this.

“In some schools, I felt as though the teachers had no sympathy for my son. As an autistic child, he sometimes suddenly becomes noisy or has erratic episodes where he will not keep still. Whenever this happened, the teachers would throw him out of class and keep him out all day long — sending him to the playing fields instead,” she says.

In addition, due to Ian’s inability to express himself through speech, his peers would bully him, making fun of him and accusing him of being a ‘sissy’ in an attempt to get him to speak.

“The teachers would simply observe these bullying episodes and do nothing. Besides that, Ian would always lag behind in almost everything without much assistance from the teachers. For example, at lunch time he would be edged out of the queue by his classmates and be the last person to get food. Because he is slow in eating, no one would bother with him and many times he ended up not feeding as by the time he got his food, it was time to return to class.”

But why didn’t she enroll him in a special needs school where he would be well taken care of?

“I live in Utawala and the nearest suitable public school that I knew was City Primary in Nairobi’s Parklands area, quite a distance away. Commuting via public transport with him to be in the school by 8am would have been almost impossible. Private schools on the other hand were too expensive. My only option was to enroll him in a regular school and work with the teachers in helping them understand his condition. I’m glad to have found that kind of support at his current school,” she says.

Today, even though 11 year-old Ian is still not able to put a sentence together, he continues to show some speech progress.

“Two weeks ago, he came up to me and said: ‘Mom, head paining”. That was the first sentence he had ever constructed. I was so excited and thinking that I had heard wrong, I asked him to repeat himself. But hard as he tried, he was unable to.

Since then, she has been on the lookout for any words coming from him, hoping to hear him put together at least two or three words. Most of Ian’s speech remains repetitive — where he continually repeats words spoken to him.

“I believe that someday, Ian will be able talk normally. It’s just a matter of time,” the hopeful mother says.

Interestingly though, Ian, who has a passion for music, is able to belt out countless tunes.

“All he needs to do is listen to a song and he instantly grasps all the words in the song. He will then sing word for word and in the exact same tune,” his mother proudly says.

So much he loves singing that his parents recently bought him a guitar, which he plays every morning before he goes to school.

Last year, Esther Mungui decided to partner with the special needs teacher who had home-schooled her son in his early years. They started a school — Eslyne Educational Centre— which is located in Utawala, Embakasi. Even though at the moment it only has six autistic children aged between four and 14, it is open to all children with special needs.

But what motivated her to start the school?

“I drew inspiration from my own experience. As a first time mother, I was clueless about the need to closely monitor my son’s developmental milestones which would have alerted me of any anomalies. At the well-baby clinic where I would take Ian for the recommended immunisation, the nurses would only be concerned about weight gain. Ian’s weight was always good and so I assumed that he was fine. However, no medic ever enquired on his developmental progress. I wish they had for if there had been any milestone delay detected, I would have consulted a doctor much earlier than I did,” she says.

Her desire to make a difference is also borne from the episode when she was given her son’s autism diagnosis by the doctor.

“The doctor casually told me that my son was autistic with no further information. I felt lost and had to navigate around the whole autism concept by myself. Now that my son is much older and the experience has taught me a lot, I would like to help other mothers avoid the confusion, feelings of sadness and isolation that I went through when Ian was much younger. I want to walk the journey with them, to encourage them and let them know that autism is a manageable condition and that the autism journey is not all gloom,” she says.

In addition, Esther says that the tribulations she had finding a school that would accommodate her son in his younger years is something she would like to provide a solution to, hence starting an accessible and affordable school within her neighbourhood.

There is no cure for autism, though with early intervention and treatment, the symptoms can be greatly improved and in some cases, they can be overcome as the child grows older, something that Esther has witnessed. Depending on the child, treatment can include a focus on a special diet, speech therapy or physical therapy and in some cases, medicines. For Esther, what has greatly helped in managing her son’s condition is keeping him away from his greatest trigger — gluten. She also keeps his foods as natural as possible.