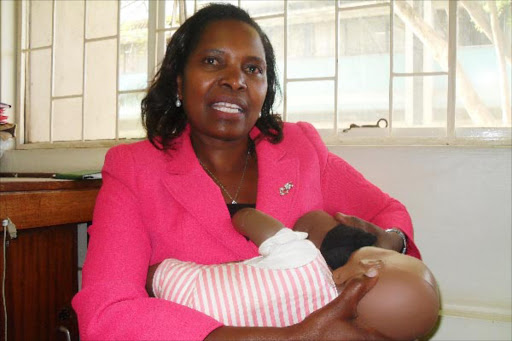 When Professor Grace Irimu recently told a group of women that they needed to teach mothers how to breastfeed, they dismissed her saying that there was nothing about breastfeeding that women did not already know.

Many perceive breastfeeding as natural and that when placed near a breast, a baby will automatically know what to do.

But the Associate Professor of Pediatrics, department of Pediatrics and Child Health is saying that this could not be further from the truth.

The married mother of three says that “there is magic in breastfeeding and it is time that women, even those past the childbearing age are reminded of the need to encourage exclusive breastfeeding within the first six months of a baby’s life and continued breastfeeding up to two years of age.”

But simply breastfeeding is not enough, she is also saying that “there is the correct way to breastfeed.”

These included, diarrhoea, pneumonia, malaria, malnutrition, meningitis and neonatal related conditions. “These infections are being caused by lack of proper breastfeeding and maintaining hygiene.A mother must always wash their hands before breastfeeding and even more importantly after changing a diaper,” she says.

Exclusive breastfeeding in the first six months of a child’s life reduces child mortality by 13 per cent.

“When a mother breastfeeds exclusively for the first six months and is yet to receive her monthly period, this reduces chances of getting pregnant by 98 per cent,” says Prof Irimu.

To address neonatal deaths now at 22 in every 1,000 live births “there is need to take information to the community. Basically neonatal deaths can be prevented through good care during pregnancy and child birth, breastfeeding and good hygiene, as well as keeping the baby warm,” she says.

Every Saturday, through a consulting network of pediatricians called Medinfo Afica, they provide a three hour session on breastfeeding to mothers.

They also carry out these trainings every year on Mother’s Day to ensure that mothers take control of the health of their babies.

Women who suffer from fatigue, have cracked nipples or painful breasts should not suffer and endure the situation believing that this is normal “it is not. This happens because a mother is not breastfeeding correctly,” she says.

Understanding the anatomy of the breast or where the milk is stored is important since this will help the mother to guide the baby on the area to press with the mouth to access the milk.

She says that the milk is stored at the base of the dark part of the breast and that the nipples are just many pipes, but they do not store milk.

“The baby must therefore press the dark area,” she says

But more importantly, Prof Irimu says that the baby must be assisted to open their mouth widely in order to reach as much of the dark area as possible depending on the size of the breast.

“For this to happen, the baby must be latch on to the breast properly,” she says.

Further she says that the mother’s tummy should touch the tummy of the baby “and the head and tummy should be facing the mother with minimal clothing between them,” says Prof Irimu.

The mother’s temperature is usually high at 370C and is perfect for keeping the baby warm.

Further, the mother should hold the breast with the thumb supported the breast at the top, while the four fingers support the breast from the bottom to form a C-shape.

To help the baby open its mouth, the mother should touch the baby’s upper lip with the nipple and then introduce most of the dark are breast quickly into baby’s mouth.

At the same time, the other hand should pull the baby towards the mother, “the mother should never bend to reach the baby,” she says.

If the baby is making smacking sounds or dimpling their cheek while suckling, something is wrong and the mother should pull the edge of the baby’s mouth towards its ears, gently, to release the breast to avoid cracking the nipples.

Once there is correct positioning and attachment “both mother and baby will enjoy the experience,” she says.

A mother should be able to hear the baby swallowing and no other noise, she says.

A rubber teat is not advisable as it confuses the baby since it is different from an actual breast.

A feeding cup is advisable when a baby is feeding from expressed breast milk.

The milk should not be micro waved but put in warm water to warm it.

A baby under six months only requires breast milk and sunlight to help strengthen its bones.

The baby gets sufficient water from breast milk and Vitamin A is in plenty because a mother is given a capsule rich in Vitamin A after giving birth.

What the Kenya Demographic and Health Survey 2014 is saying:

Exclusive breastfeeding is up from 32 percent to 61 percent.

Exclusive breastfeeding is however lowest in babies four to five months.