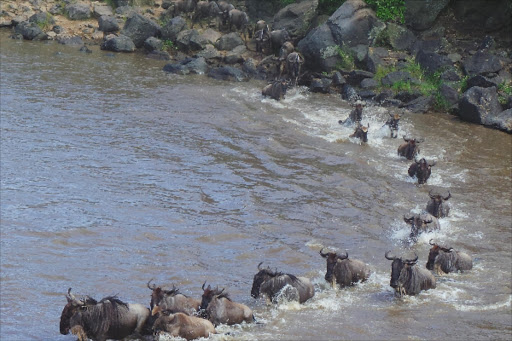 Kenya is said to be one of Africa's most popular tourist destination as it has a lot to offer. Here are some of the destinations to visit.

The annual wildebeests migration and zebras in East Africa is one of nature's biggest spectacles and one of the wonders of the world. Over two million animals migrate from Serengeti national park in Tanzania to Masaai Mara national reserve from July through to October.

Mount Kenya is Africa’s second mountain peaking at over 5,000m and the tallest mountain in Kenya located in Central Kenya. It provides the perfect ambiance for mountain climbers with paths that have been created to ensure safety and maximum mountain climbing experience with guidance.

Mombasa has an abundance of white sandy beaches besides the clear turquoise waters of the Indian Ocean. There are a variety of wildlife and historical sites to be enjoyed and for the adventurous ones there is scuba diving and snorkeling to be done.

This is held in November every year in Lamu, one of Kenya's oldest inhabited towns which was named by Unesco as a World Heritage Site in 2001.The historical town dates back to the 14th century and not much has changed. During the annual festival, you get to experience the famous donkey and dhow races as you marvel at the beautiful architectural of the old town where history still lives on.

The Great Rift Valley has spectacular geological wonders with a wealth of attractions. It is home to more than 10 volcanoes and seven lakes with game parks, lodges and hotels. Some of the major attractions in this valley include Mt Longonot, Hell's Gate gorge, Lake Nakuru which is the home to million flamingos making it a bird watchers paradise. There is Lake Bogoria, Yellowstone Park, which is famous for its geysers which can erupt to five meters high and Lake Turkana, the world’s largest permanent desert lake and the largest of Kenyan lakes.

Sheldrick Trust's Elephant orphanage is a wildlife trust that rescues and rehabilitates orphaned elephants before releasing them to the world. It is a located next to the Nairobi national park where you get to meet the elephant orphans, watch them get fed, find out their life stories and can adopt a baby elephant.

Kenya has over 16 national parks, over 10 national reserves and many marine parks and reserves all of which are under the custodian of the Kenya Wildlife Service (KWS). Amboseli and Lake Nakuru national parks are categorised as premium parks because of the number of tourists who visit. The wildlife is plentiful with more than 50 mammal species and the big cats to look for. Amboseli park is set in the shadows of Mt Kilimanjaro and provides an incredible view.

Kogello village in Siaya county is the ancestral home to US President Barack Obama's father. Obama's father is buried in the village but his grandmother Mama Sarah Anyango Obama still lives in the home. Here you will get to interview with Mama Sarah as you visit the homestead.

A number of counties have museums that are under the custodian of the National Museums of Kenya. They include Nairobi National Museum, Karen Blixen, Nairobi snake park, Kapenguria, Narok, Kisumu Kitale and Wajir museums.

It is here in the museums that Kenya's past and present cultural and national heritage is collected, studied, documented and preserved.

The Kit Mikayi rocks are located along the Kisumu-Bondo road. This is said to be the rock where Mikayi or the first wife or mother of the Luo tribe sheltered herself after a long journey down the Nile. There is also the story that this was once the homestead of a powerful man who used to abuse and mistreat his first wife and the woman returned to haunt him after her death and turned him into stones. Religious groups and the sick and those who want solace after a misfortune visit the rocks hoping that their prayers will be answered.

Kakamega forest which is located in Western Kenya in Kakamega County is the only tropical rain forest in Kenya that once stretched across Central Africa to East Africa.

It is home to over 360 species of birds, 380 species of plants, 400 species of butterflies, seven species of primates and other mammals such as squirrels, Bush bucks, Aardvarks, porcupines, giant forest hogs and many others.

The rain forest has walking/hiking trails silent with only melody of singing birds, whispering trees, rasp of butterflies, croaking frogs, chattering of monkeys as they move from one tree to another and gurgling streams nearby.

Nanyuki town is right in the center of Kenya. Its equator point lets you experiment on the force of the earth's rotation.

The experiment is done at 10 feet north of the equator where water is poured into the jug while the hole at the bottom is blocked with a finger. The sticks are allowed to float on the water then the finger is removed from the bottom of the jug to allow the water to flow into the empty bowl below. The sticks start rotating in a clock-wise direction and when the same experiment is repeated at 10 feet south of the equator, the sticks move in an anti-clockwise direction and when the experiment is conducted on the equator, the sticks don’t move at all. This basically shows the deflection or the force of the earth’s rotation.

The Mijikenda Kaya Forests consist of 11 separate forest sites spread over some 200 km along the coast containing the remains of numerous fortified villages, known as kayas, of the Mijikenda people. The kayas, created as of the 16th century but abandoned by the 1940s, are now regarded as the abodes of ancestors and are referred as sacred sites and are maintained by councils of elders. The site is inscribed as bearing unique testimony to a cultural tradition and for its direct link to a living tradition.

The forest around the Kayas have been nurtured by the Mijikenda community to protect the sacred graves and groves and are now almost the only remains of the once extensive coastal lowland forest.

An explorer by the name Joseph Thomson came across the waterfall inn 1883 and named it Thompson Falls after his father.

Also known as T falls, the waterfall is said to plunge about 72 m on the Ewaso Narok River on the far northern end of the Aberdare Ranges. You can also catch a glimpse of hippo pools about two kilometers from the falls.

Kyamwilu in Machakos is a place where gravity defies nature. On the hills water flows uphill instead of downhill and when a car is parked in free gear, it goes up the hill instead of the convectional down hill.

Post a comment
WATCH: The latest videos from the Star
by AGATHA NGOTHO
Sasa
12 December 2013 - 00:00
Read The E-Paper