Kigio Wildlife Conservancy: All about eco-tourism 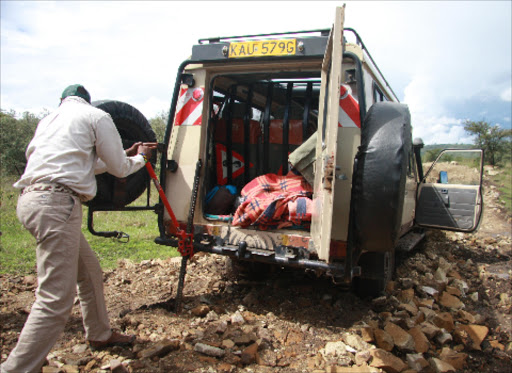 Stuck in the mud. Dominic struggles with the jerk

It was on a wet Saturday mid-morning that we set out for Kigio Wildlife Conservancy. The 3,500-acre conservancy is located about 120km from Nairobi and is situated between Naivasha and Gilgil. The conservancy was originally a cattle ranch owned by a colonial settler family. It was sold by the family to the local community who after a few years decided to forgo cattle ranching in favour of wildlife conservation with the help of conservationist Chris Campbell.

Funded by the European Union, Biodiversity Conservation Programme, Tusk Trust (UK) and Born Free Foundation (UK), the former cattle ranch was fenced and Kenya’s most threatened Rothschild Giraffe were relocated here. It is one of the two most endangered of the six identified giraffe species in Africa.

Safe from poaching, plenty of other wildlife has settled here. Today, there are 3,500 head of wildlife in the sanctuary, up from only 100 in 1996.

There are two properties in Kigio - Malewa Wildlife Lodge and Kigio Wildlife Camp - which are both at the forefront of eco-tourism in the Rift Valley lakes area. Joan, our handler for the day, who is a regular at the camp, advised us all to carry a pair of boots as Kigio camp had reportedly flooded the previous day and the Malewa Bridge washed away. Our driver Dominic however didn’t seem worried about the roads as he was confident his 4X4 tour truck could handle any terrain.

To get to the conservancy, we turn in to an all-weather road near Gilgil at the huge sign post that reads ‘Kigio Wildlife Conservancy’. Kigio has a wide range of habitats, from riverine and euphoria woodlands to short grass and Leleshwa shrub. Despite our driver’s confidence, we do get stuck in the mud. As he worked to get us out, we spotted a few giraffes grazing in the distance.

“Those are the Rothschild giraffe;, one of the most endangered giraffe species in the world,” Dominic tells us. The giraffes were relocated from North West Kenya near Mt Elgon a little over a decade ago after they were nearly poached to extinction.

“The giraffes are found in Nakuru, Naivasha and Nairobi and their population could only be about 1,000 in total. Right now Malewa and Kigio hosts about 30 of them in total,” he said.

Apart from the prized giraffe, the sanctuary is home to over 250 bird species, a 200 strong herd of buffalo, Grant’s and Thomson’s gazelle, eland, hyenas, caracal, aardvark, aardwolf, honey badger, spring hare and hippos which are protected by an electric fence on three sides and the Malewa River on one. It takes us about 25 minutes to arrive at Kigio Wildlife Camp, which is approximately seven kilometres from the main road.

Despite having been up by five that morning to deal with the flooding crisis in their honeymoon suite, the staff is very warm and friendly. They work under the guidance of two South Africans David and Shirley who relocated to Kenya to manage the property three years ago. On arrival we have a welcome drink of fresh water melon juice accompanied by a sumptuous lunch of coconut chicken and fries before being checked into our rooms. The camp is surrounded by striking Yellow-fever tree woodland overlooking the Malewa River.

Much of the architecture in both Malewa and Kigio is influenced by the traditional African thatched houses. The rooms are constructed using pine-wood, canvas panels, glass, local earth, and grass provided by the surrounding community with minimal use of cement and steel. This goes hand in hand with the eco-friendly business that they run.

To comply with the eco-stamp, at the conservancy, electricity is generated by solar power, waste recycled, water drawn using hydro power, hot water supplied by efficient 'kuni' boilers, cooking done with gas and eco-bricks from sustainable sources and food sourced from local farmers.

“We are working towards sustainable eco-tourism and that means we have to work hand in hand with the surrounding community as well. We currently have a number of projects we do with them including community tours, where our guests get to visit the local community. For each tour a fee is collected and donated to the community. Our soap, paper and even honey we get from the local community,” says David who is an agricultural economist by profession.

Kigio Wildlife Camp has eleven spacious suites and one two-bedroom family suite, each built on deck and containing a large bedroom and sitting area, a private bathroom shower and balcony.

The Malewa Wildlife Lodge has four single-storey cottages and one two-storey cottage with two bedrooms (suitable for a family). All cottages are ensuite and can have twin or king size double beds with warm duvets. Each room has a uniquely designed shower with a roof light. They have a rustic double-storey mess, framed by Yellow-fever trees and fronted by the Malewa River that has several sitting areas. Upstairs there is the reception and 'chill room' for children, downstairs there are two circular sitting areas with fire places, dining room and a bar. The two properties are half a kilometre apart.

“We are very big on recycling, like the paper we use around the conservancy is made of giraffe droppings. Our guests are provided with one bottle of drinking water on arrival and when this runs out, we refill it for them instead of giving out another bottle of water. This helps to reduce on plastics. After they leave, we donate the used bottles to some of the local schools in the area,” said David.

The children use the bottles for carrying water, watering plants, science projects and math. The conservancy also hosts field trips for local schools, where the students are introduced to wildlife, birdlife, indigenous plants and habitats. They are also taught about utilisation and conservation of natural resources, use of solar as a source of energy, water conservation and recycling.

Apart from game drives, the conservancy also offers nature walks, biking and fishing with knowledgeable local naturalists who can give you a wonderful all round safari experience. Following the rains, we were unable to enjoy the planned night game drive and sundowner near the River Malewa waterfalls.

However we did enjoy an evening walk with one of the naturalists, George. He shared a humorous anecdote of two white rhinos male and female who were moved to the park a few years ago. Unfortunately, the male rhino overfed and died of heart complications. “It wasn’t very active and so after it died, the female was relocated to Lewa conservancy and now we hear she even got babies.”

At Kigio conservancy, they don’t have a big poaching problem. “Poachers here in this area are subsistence poachers. They target warthogs for food. We try to involve them in our projects so that they can make some money to sustain themselves,” said David.

According to George, the poachers dig a channel under the electric fence and get into the conservancy. “One poacher was caught last December for poaching warthogs. He was jailed for seven years after appealing his 12-year sentence. Most of them come around 3-4am because they know the guards cannot patrol all night. However it’s minimised because every week the KWS comes to patrol the area.

David says their greatest challenge at the moment is the roads. “We have been trying to get that fixed for the longest time but not much has been done and that affects the number of guests that we get. In terms of wildlife, I would like to see more of our giraffes relocated to other conservancies and I hope we can get a rhino and ostriches back here.”

For those looking for a relaxing environment outside of town, away from the hustle and bustle of the fast life, phones, TV and internet, Kigio Wildlife Conservancy is definitely the place for you. Who knows, you might just wake up to the sight of a beautiful giraffe drinking water by the river outside your room like one guest recently did.

For rates and more information you can check their website: www.kigio.com/conservancy.htm