Sexual harrassment in the workplace 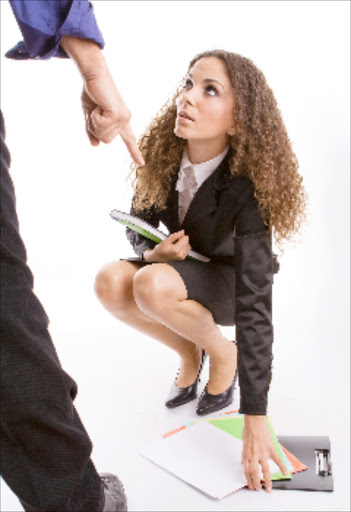 Sexual harrassment in the workplace

The competition at the workplace has intensified over the years as we get more educated and the opportunities become fewer and fewer and the cut throat fight up the corporate ladder gets bloodier . There is a widespread notion among men that the beautiful ladies at workplace have it easier with their male bosses and are more likely to land that promotion without putting in much effort.

Sorry to break your hearts boys, but I disagree with you. While it is a fact that some women successfully get favors at the place of work due to their looks, because they went out for coffee with the boss or because they cannot pass an opportunity to tantalisingly smile at the boss, it is also a fact that many women miss out on opportunities they deserve just because they did not put up with their bosses’ advances.

It may not seem a big deal to men because bantering about sex with your colleagues is a fun thing to do, but for a female colleague who has to be on the lookout all day just to be sure her smile or something she says is not misconstrued, eight hours in the office can seem a lifetime. I’ve been told stories of bosses who just can't zip up, of ladies who’ve had to quit their jobs to hold on to their morals and those that move on, look the other way and hope that things will get better.

What would you do if you attended an interview for a promising job and you later received a call from one of the panelists who instead of giving you the good news- that you got the job – asks you out on a date, hinting that you would discuss the prospects of getting that job on the date? Would you go out on the date with him?

Would you decline and leave it to fate, keeping in mind that you might have to work with the guy if you are hired or would you forget about the job altogether? This is the dilemma Ashley was in a few months ago. She didn’t have to worry about working with the guy though, because she declined to go out on a date with him and never heard from the company again. So yes, your guess is as good as mine – she wasn’t good enough for the position and failed the interview – right?

Everyone wants to look good. Looking good is an asset – at least that’s what most of us think. Well, not according to Irene who had to quit her job because her boss made it clear that he wanted her to go out with her. Her boss asked her out one Friday evening when she was leaving work, a request she politely declined citing the normal excuses and she thought that she had escaped. Little did she know that this was just the beginning of such advances and her constant refusal to oblige was not taken too well.

“I had to deal with almost every colleague in the office. It was easier with my peers because I’d just tell them off and they knew well that I was seriously committed to someone else at the time. But it didn’t go down smoothly with the bigger heads- the managers and heads of departments who felt I owed them a date for some favors I’d enjoyed, probably in my previous life because I do not know of any.

Eventually, the relationship with my boss went south. He became hostile and made life so unbearable for me that waking up to go to work tested every bit of my willpower until I could take it no more. Eventually I caved in and quit. Helen’s story isn’t any different as she didn’t get the chance to practice in her area of training. “I got shortlisted for the position of human resource assistant with a leading microfinance institution.

As one would have it, I showed up on time expecting to ace the interview and I was surprised to find only one guy at the other side of the table. Frankly I’d expected a panel of interviewers for such a position. To sum it up, the guy ended up asking me to go out on a date with him as an entry level condition.

I could not even believe he was doing this in the office and I politely declined which in turn cost me a dream job. The guy had the audacity to follow up later to find out if I’d changed my mind. Telling the guy off was the best I could do and regardless of how badly I wanted the position, I will never regret my decision.” If you are a guy and you are still not convinced by these stories of missed opportunities by our lady colleagues, then Patricia’s story should move you. Otherwise, I’ll just brand you, “Beyond Repair” and be done with it.

Though seemingly thoughtless and stupid, Patricia’s act of sleeping with her boss due to the promise of better things at work is not a decision she remembers making. She was a receptionist in a local IT firm where the boss was the owner of the firm. One evening the boss called her into his office and commended her on the good job she was doing and told her he was considering giving her more responsibilities as an office administrator.

“He said he was on his way out for an appointment and we could discuss details over coffee, so I grabbed my purse and we headed out. We went to a popular coffee house and talked about what he wanted me to do when I took up the new role and went as far as discussing my new salary,” she says.

The coffee date was harmless and it ended well. Patricia was to start her new duties the following month. “He even asked me if I had a friend I could recommend for my current position. He then started asking me to accompany him for appointments that would end up not showing up.

We ended up sleeping together and a month later I was fired for getting to work late - just once! I blame myself for what happened but it hurts me more when I think that another person will go through the same thing, while the culprit remains unpunished. Suing is an option but the financial burden forces most of us to walk away and throw it in the ‘bad decisions’ box.”

There are more cases of women that are ill-treated by their female seniors just because they feel threatened by a younger and more beautiful addition to the workforce, or that beautiful lady in the office that will never get the promotion or salary increment she deserves because the boss fears that his wife (who is the finance manager) might perceive it as a reward for “a job well done”.

Our sisters are going through such a rough time at work with the extra burden of keeping a good relationship with their male bosses and colleagues. With the escalating harassment cases, it is a clear indication that their male counterparts at the place of work are confident that nothing or rather no disciplinary action follows these kind of advances.

It is up to the ladies to draw the boundaries and govern their territories regardless of what they stand to gain or lose. So the next time you judge a working lady just because you missed out on an opportunity to have her, keep in mind what she may have gone through to get where she is.