• Laikipia Woman Representative Catherine Waruguru says she's seen it all and encourages students to chase their dreams and not give up.

• She was branded the daughter of a sex worker, insulted and abused but she was helped by well-wishers and worked hard. Now she's in Parliament. 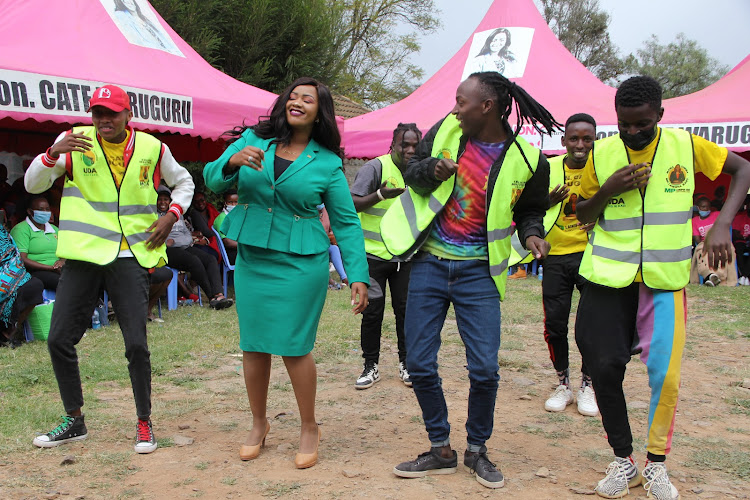 YOU CAN DO IT: Laikipia county Woman Representative Catherine Waruguru joins youths in a dance at her Nanyuki Town office on Monday, January 17.
Image: ELIUD WAITHAKA

A girl was orphaned at age 13, her unmarried mother was branded a prostitute and she a prostitute's child. The family refused to bury her mother on family land.

An aunt said she and her brother should hang her mother's body in the house and eat it day by day, along with birds and maggots, until it was gone.

She scored 436 out of 500 on the KCPE exam but had no one to pay school fees so she repeated a class. She eventually got scholarships and well-wishers helped.

She narrated it to 58 youths who joined the Kenya Industrial Training Institute in Nakuru town on Monday.

"I've seen it all," she said, "and nothing will discourage me from achieving my dreams."

The legislator encouraged the youths to be steadfast in their work stick to their ambitions and remain focused despite hardship.

The students are in the fourth year of the Youth Empowerment Programme she set up.

“You can imagine my younger brother and I were left orphans at that tender age. One of our aunties said my mother could not be buried on our grandmother's land in Karatina," she said.

"We forgave her," she said, adding that her mother was finally buried after three months in a morgue.

Waruguru said she never knew her father and everyone assumed he was a sex worker's client as her mother was unmarried.

After having to repeat a primary class despite her exam grades, she walked to Kanyama secondary school in Karatina, Nyeri county and told her story to the principal. He too was an orphan and gave her a shoulder to cry on, and more.

I'm not a good girl. I'm a fighter

“When I narrated my predicament, he wept and promised that his tithe for his church would pay my school fees," Waruguru said.

Throughout her four years in secondary school, she didn't pay a shilling and her fellow students mocked her, saying her parents were rich. That's why they were able to pay her school fees.

Warugu said she was offering scholarships to the young men and women who would have been wasted in the villages.

Her scholarship enables them to gain technical skills for employment or start their own businesses in the future.

By the end of this year, she said, about 500 youths will have gained technical skills.

Waruguru was nominated to the Laikipia County Assembly in 2013 at the age of 24. Then she was elected to the National Assembly, the youngest woman representative ever in Kenya.

She warned a revolution is coming is coming in Laikipia East where everything will be done the right way. She said the revolution will be bloodless and gunless but inspired by the Holy Spirit

The UDA party affiliate MP is running for the Laikipia East  seat in the coming general election.

She promised that once elected as Laikipia East legislator, she would table a bill in Parliament compelling the national government to pay contractors their delayed  payments with interests.

“If you get late in paying your dues to the Kenya Revenue Authority, you are forced to pay with interest. That should also happen with the contractors whose money is delayed,” Waruguru said.

The legislator warned that a revolution is coming in Laikipia East where everything will be done in the right manner.

She said she has been branded, wrongly, as a leader who insults others.

“I have never insulted anybody but I attack injustices and evil in the community. If I do not do that, I do not know who else will do it,” she said.

She said the revolution will be bloodless and gunless but inspired by the Holy Spirit.

She said she draws her strength and fight from the Nobel Laureate winner and Green Belt Movement leader Wangare Mathai (deceased).

Waruguru condemned Laikipia's sacking of doctors in 2018 saying residents continue to suffer by travelling to other counties in search of medical attention.

She said she would not keep silent when people were suffering for no apparent reason, adding, "I'm not a good girl, I'm a fighter."

Waruguru will face off with MP Mohammed Amin, among others, interested in the seat that is expected to be hotly contested.

When she ditched Jubilee, Waruguru said she took her time to interrogate her conscience and thoughts.
News
8 months ago

Says Kenyans eager to know where their differences stemmed from
News
9 months ago
by ELIUD WAITHAKA
R.Valley - Page 30
19 January 2022 - 22:00