This comes after a British newspaper published details of a BATUK soldier who allegedly killed Agnes Wanjiru . 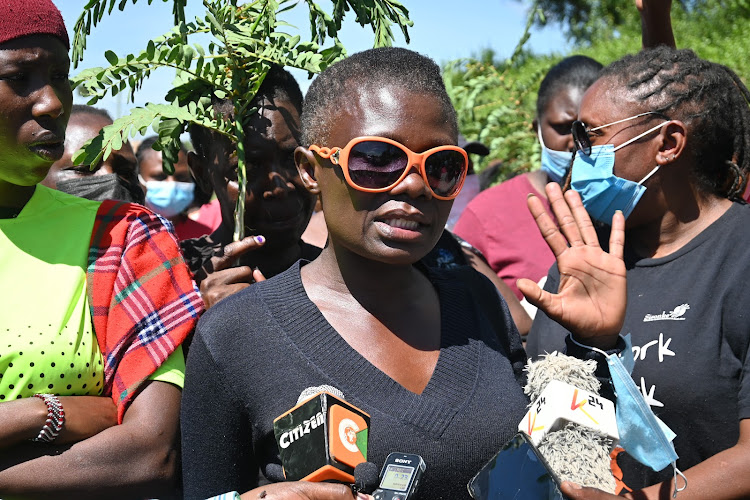 SEX WORKERS Calvin Nafula, a sex worker in Nanyuki town, addresses the media during a demonstration yesterday over the killing of Agnes Wanjiru in 2012 allegedly by a British soldier.
Image: ELIUD WAITHAKA

Sex workers in Majengo estate in the outskirts of Nanyuki town on Tuesday demonstrated demanding justice for Agnes Wanjiru, allegedly killed by a British solider in 2012.

Marranne Wangui, a sex worker and a member of Laikipia Peer Educators, condemned the act and urged the government to take swift action in ensuring justice is served.

This comes barely two days after a British newspaper published details of a British soldier who was willing to divulge information on the killing of  Wanjiru by his colleague.

“We are here to fight for our rights and we hope the government will do some follow up in favour of the family who suffered the tragic loss of Wanjiru at a young age,” Wangui said.

She added that sex workers suffer stigma and discrimination, urging individuals to respect their human rights.

“Most of us are breadwinners in our families. We are calling upon the government to uphold our rights since we face a lot of challenges as sex workers,” she added.

Safina Wamuyu urged the British government to take responsibility and take care of the now 10-year-old child left by the deceased.

“The family is not financially stable, we are calling upon the British government to help cater for the needs of the child,” Wamuyu said.

In September 2012, one Florah Nyaguthii, who was with Wanjiru on that night, had told the Star that Wanjiru called her at around 9pm saying she was at Sherlocks bar in Nanyuki town and wanted Nyaguthii to join her.

She said she saw her with a white man at the door of Sherlocks.  They then moved to Lions Court bar.

“About two hours later, she came panting.  I asked her what was wrong.  She told me she had picked some money from the Johnie (British army soldier) and that were it not for the man guarding the entrance of the bar, her daughter would have lived a comfortable life. I did not bother to ask her how much it was," Nyaguthii told the Star.

“She then went on to tell me that  the guard saw her removing the money from the soldier’s pocket and when she attempted to leave the premises, he followed her and snatched the money which she had hidden in her underpants."

Susan Nyambura, who joined them at Lions Court Bar, added that as the night wore on, Wanjiru excused herself to go to a room with one of the two soldiers whom she was sitting with at the bar.

Florah said that was the last time they saw her.

"In the morning, while going to work at a salon where I worked, I passed by her sister’s house who was living with Shiru as she was popularly referred. I asked her whereabouts because I wanted to give her back her ID because I was carrying them for for  Shiru and Susan."

Wanyua was holding Shiru's then six-months-old daughter who had been left under the care of Susan’s mother the previous evening.

"I also passed by again as I was coming from work and was informed that Wanjiru had not returned."

“It is after two months that we heard that a body had been retrieved from a septic tank at the hotel. We went to the Nanyuki district hospital mortuary where the body was taken by police officers and identified it. It was Agnes Wanjiru."

“From there we recorded statements with the police who also informed us that several employees of the hotel had also recorded statements over the same. Since then we have been waiting for the verdict. It is our prayer that justice will prevail and the culprits brought to book.”

Then local head of police Joshua Lutukai said investigations were still in progress.

At that time, United Kingdom’s ministry of defence spokesman said the government was informed after the decomposing body was retrieved from a septic tank in the hotel, adding that it was assisting the Kenyan authorities.

“The British government is assisting Kenyan authorities in investigating allegations that British soldiers murdered a 21-year-old Kenyan woman,” the spokesman said in a report.

It added, “This is an ongoing Kenyan investigation. We understand that individuals who were in local area, potentially including some military personnel may be called on as witnesses in the case. We stand by to offer any assistance and cooperation that is required. It would be inappropriate for the ministry of defence to comment further."

On Sunday, a United Kingdom newspaper published a story of former Batuk soldiers detailing the occurrences of the night.

It revealed that the identity of the British soldier who allegedly stabbed Wanjiru to death is widely known in the army.

Following an investigation by The Sunday Times, the soldiers who took part in the drunken night of group sex with local women, said they were shown Wanjiru's body that evening by her alleged killer, named by the paper as Soldier X.

Another soldier from the Duke of Lancaster regiment, identified as Soldier Y, said, "He took me to the tank and lifted it up, and I looked in and I just remember seeing her in there. My heart sank. My mind just went blank. The only thing I could say to him was: 'I'll never forgive you for this."

The recent allegations have prompted a fresh murder probe by the British Royal Military Police, while a Labour MP has called on the government to investigate any possible cover-up.