The two candidates' supporters are competing to outdo each other in mobilisation efforts. 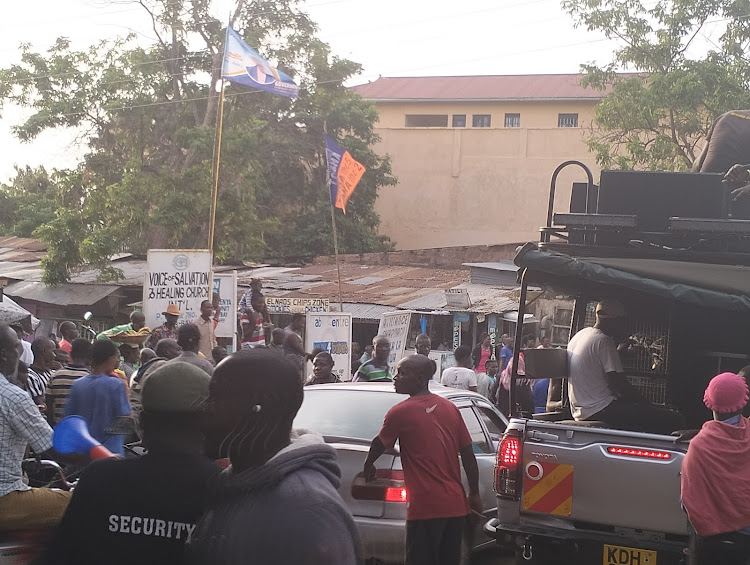 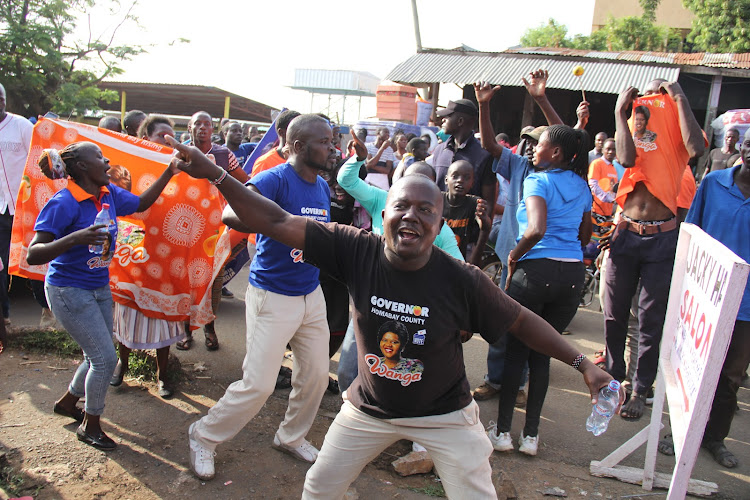 The political rivals, through their supporters, normally pitch tent at the ground every evening to drum up support for governor bids.

The supporters, who are mainly youths and women, march along the streets and estates of Homa Bay town as they chant, beat drums, blow vuvuzelas and dance.

The supporters, who operate in groups, also use public address and music systems with ohangla songs that praise their candidates.

Kidero identifies with Homa Bay 'Manyien' (New Homa Bay) as his slogan while Wanga uses 'Genowa' (Our hope) as her catchphrase.

Ogallo Akech and George Ondigo who lead Wanga and Kidero teams respectively said their intension is to mobilise support for their candidates.

He said posta ground is a significant and focal point in Homa Bay, which they cannot allow politicians opposed to ODM ideologies to dominate.

Wanga is seeking governorship on ODM ticket while Kidero is vying as an independent.

“Posta ground is a convergent place in Homa Bay where decisions made influence political direction. Information about popularity of candidates is gathered there hence we cannot leave Kidero to run away with it,” Akech said.

Posta ground in Homa Bay is similar to that of Jacaranda and Kamukunji grounds in Nairobi where people meet and discuss political affairs.

Aketch said Kidero supporters had dominated the place in the previous days, but they are determined to win it over before election day.

“My team has started telling residents why they need to stand with Wanga and ODM as a party. We are catching up and I hope we will eventually take over the ground,” he added.

According to Ondigo, Kidero supporters will neither relent nor get ready to leave the ground for their opponents.

He said his side has managed to use the ground to sell Kidero and his agenda for the people.

Ondigo said the massive support and popularity Kidero is currently enjoying in Homa Bay is because of the campaign strategies they are applying.

He also said Kidero has shared with them his manifesto and the development projects he would like to initiate and implement should he get elected.

“Majority of residents are now agreeing with us that we should go for personalities rather than political parties. They believe Kidero will deliver on the election pledges,” Ondigo said.

Governor Cyprian Awiti alleged underperformance and misuse of public resources have also given Kidero supporters some motivation to popularise their candidate.

They said Awiti has done little to improve the living standards of residents despite being voted twice on ODM ticket.

Ondigo added that ODM and leaders they elected did not show good leadership in Homa Bay hence they do not see reasons for electing Wanga as governor.

Wanga is also the current chairperson of ODM in Homa Bay.

“Endorsement of Wanga by Awiti is seen as an extension of the current regime. We feel Wanga is part of the failure,” Ondigo said.

Homa Bay political observer Patrick Agwagra also agrees that both Wanga and Kidero have a reason to flex their muscles to control the ground.

According to Agwagra, former Kasipul MP Oyugi Magwanga gained popularity across the county after taking control of the place.

Magwanga is believed to have defeated Awiti in 2017 gubernatorial race.

“Magwanga supporters dominated posta ground throughout the 2017 electioneering period. He got overwhelming supporters in the election,” Agwagra said.

Agwagra further said the ground has been used as a popularity yardstick for politicians since 1992 election.

Political candidates who are much talked about at the place normally get elected.

The political observer said Kidero and Wanga are keen in taking control of the place. He is pleased that the supporters are conducting themselves peacefully.

Says challenges are due to bad leadership of current administration under Governor Cyprian Awiti.
Nyanza - Page 29
8 months ago

On Sunday some residents sustained head injuries after being attacked with crude weapons
Counties
8 months ago
Post a comment
WATCH: The latest videos from the Star
by ROBERT OMOLLO
Nyanza - Page 29
07 June 2022 - 22:00
Read The E-Paper