Says pre-election security mapping of the country has already been done and hot spots identified.

•The number of flashpoints has decreased compared to those in 2017.

•The CS said specially trained teams have been embedded into the population in plain clothes and stationed in malls and town squares to nib any breach of peace in the bud. 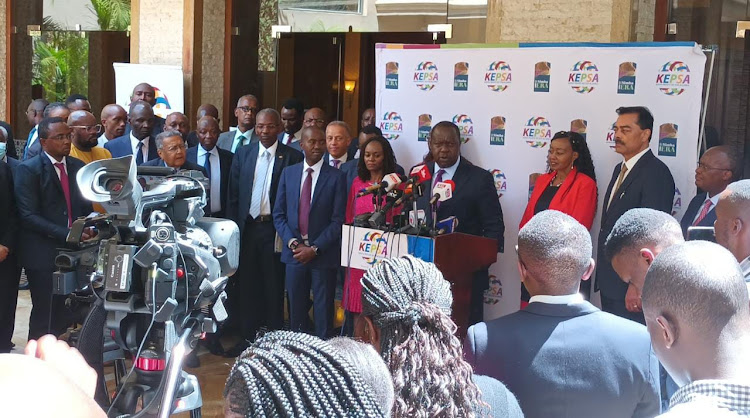 The government will have specialised training of officers, build manpower and deploy plainclothes cops to secure the August polls.

Interior CS Fred Matiang'i said they were ready to support the Independent Electoral and Boundaries Commission to deliver free and fair elections.

More measures include increasing the number of police officers at the National Police Service. He said the state had recruited 10,000 more officers and hence manpower would not be a challenge.

He said a good number of officers will be embedded with the IEBC at their discretion to help them deal with any issues.

Matiang'i said from at a time like now ahead of the 2017 election, the country was unsafe with numerous violence cases.

The number has significantly reduced.

He said pre-election security mapping of the country has already been done and hot spots identified.

The number of flashpoints has decreased compared to those in 2017.

The CS said specially trained teams have been embedded into the population in plainclothes and stationed in malls and town squares to nip any breach of peace in the bud.

Some of the special teams are trained abroad.

The intelligence systems have been cascaded down to the villages using the police and national administration structures to ensure quick response after a crime is committed.

“People forget that not long ago, bombs used to go off in matatus and bus stations. This is no longer the case due to the massive investment in the sector,” he said.

“Most of our specially trained teams remain undercover.”

Matiang’i gave an example of an incident in 2020 when some people circulated hateful leaflets in Eldoret at 4am.

He said in a test of the system, the apparatus started, ensuring that by 7am, the suspects were in police custody.

The CS said the arrangements are credited for infiltrating plans of terrorists and foiling some.

He said the state was waiting on the IEBC to finalise its planning and ask for whatever number of officers it needed to secure the elections.

The state has procured and dispatched 2,000 new vehicles to ensure ease of mobility of officers in responding to security alarms.

“The President is clear that security must be an all government approach and we must ensure reduced turnaround time after crimes have been committed. We are currently at 5 minutes in some places,” he said.

The CS denied that the involvement of ministers in politics would affect the ability of the IEBC to conduct elections.

Treasury PS Julius Muyia said the government will allocate money to IEBC to finance its operations.

ICT CS Joe Mucheru defended his involvement in the campaigns saying he was just a voter.

He said all the IT needs are taken care of by the Communication Authority.

“I don't have the elections server. It is other independent institutions that do that work. So it is more politics than anything else,” he said.

Mucheru said the country had 78 per cent network coverage in 2017 but now the coverage stands at 96.4 per cent.

They said technology continues to play a significant role in administering Kenyan elections.
News
2 months ago

MULE MUSAU: IEBC should engage everyone on laws, timelines

There's no sufficient voter education; we have new laws, it is important for voters to be aware
News
3 months ago

Ballot papers to be procured in June and July, says Chebukati

Police, other security agencies have been mobilised and strategically deployed.
News
4 months ago
“WATCH: The latest videos from the Star”
News - Page 10
23 May 2022 - 23:00