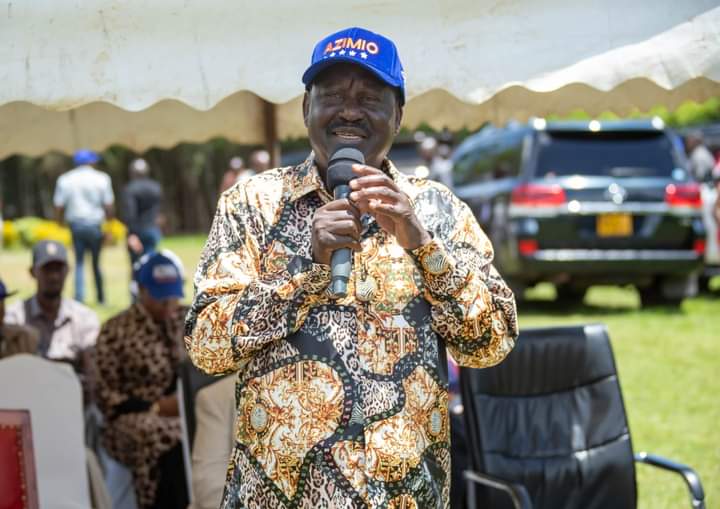 ODM leader Raila Odinga on Sunday assured his supporters he had not forgotten his reforms journey, restating his pledge to bring down the cost of living.

While in Laikipia last Monday, the former Prime Minister said it would be among his first priorities in the maiden 100 days should he win the August 9 general election.

While addressing an ecstatic crowd of Gor Mahia and AFC Leopards fans on Sunday, the ODM leader said he was seized of the challenges Kenyans are facing in their daily lives.

“I know the problems we have. I know where we have come from, where we are and where are going. We know the price of unga, cooking oil and rent is high. We will reduce the cost of living. We will change all these. We have a plan,” Raila said.

He was accompanied by former Gatanga MP Peter Kenneth, MPs Sabina Chege and Otiende Amollo, among other leaders.

The Azimio la Umoja flagbearer said he was still on course in the fight to liberate Kenyans.

His critics, especially in William Ruto's Kenya Kwanza camp, have over time accused him of betraying his reforms cause and going to bed with the government of President Uhuru Kenyatta.

But the ODM leader said he had plans for Kenyans, more so the youth, to create jobs, improve healthcare and measures to put money in people’s pockets.

Raila announced a Sh24 million donation from President Uhuru Kenyatta to the two teams. The players would get Sh4 million and the rest for the clubs.

The ODM leader, 77, said he would initiate measures to improve football in Kenya to international standards. He is a renowned football supporter.

“We are working on a strategy to make our football rich to sustain itself. We’ll streamline advertisement and balloting issues,” Raila said in his call to the fans to turn out and vote for him on August 9.

“We will hire professional coaches for our young men to play like international players Sadio Mane, Saka and even our own Victor Wanyama,” he said.

Peter Kenneth, for his part, said, “We have brought Baba to the game. We both played football. If we hold his hand to make him President on August 9, I know the standards of football will improve.”

Kenneth urged the gathering to consider voting for Raila, saying the former Prime Minister was well aware of and understood the citizens’ struggles.

“He knows the problems in the country. Food prices are high but we know Raila’s government will bring it down,” the former Gatanga MP, who is angling for the post of deputy president, said.

Chege, who has also been shortlisted by the panel selecting Raila’s deputy, said the ODM leader had the best plans for Kenyans, citing the youth, including single women.

“Only Baba has the best plans for single women. He is the one with a plan for a Sh6,000 monthly stipend. We will defeat the UDA team. Come out on August 9 and vote Raila to State House,” Chege said.

He said the panel had unanimously agreed on seven names for Raila running mate.
News
1 month ago