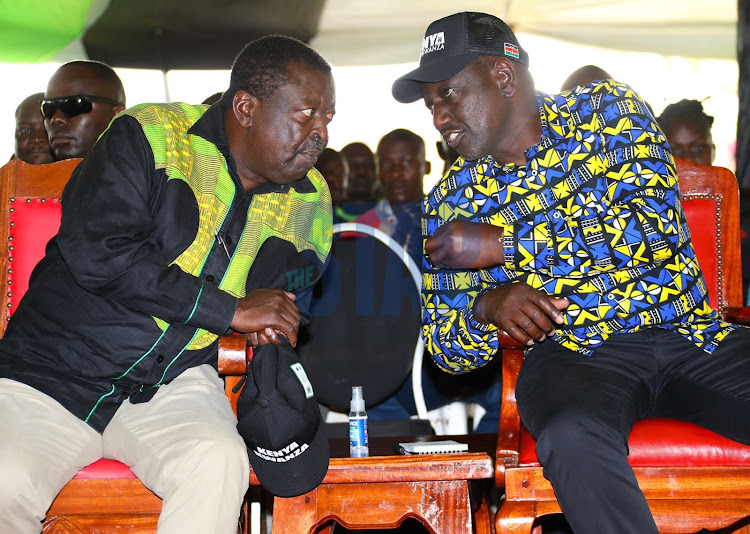 Ruto said key development plans by the government collapsed soon after Uhuru shook hands with the ODM leader in March 2018.

While campaigning in Kisii county, Ruto said Raila let down the President by wasting his second term in office since their focus switched to changing the Constitution and managing succession.

“The President has said it himself that the people he assigned duties failed him. Now that things are stuck, he is looking for me,” Ruto stated.

He appealed to Kenyans to reject politicians close to Uhuru, saying they have demonstrated inability to move the country forward.

While leading Labour Day celebrations at Nyayo National Stadium on Sunday, Uhuru blasted Ruto, saying he deserted his duties and accused him of “just hurling insults at me instead of working.”

Uhuru censured his estranged deputy for abandoning him at his time of need in the running of government affairs.

In a bare-knuckle attack, Uhuru accused Ruto of being obsessed with succession politics.

A visibly angry Uhuru said it was ridiculous for his deputy to continue criticising him for the rising cost of living.

On Wednesday, Ruto said it was during the first term that the government connected some eight million Kenyans to electricity.

“In our second term when we had the handshake, the housing programme collapsed, the manufacturing endeavour did not move and universal health coverage failed to take off," Ruto said.

He also said the "transformation of agriculture stalled. The difference of the time I was with the President and the time he has been with Raila is for Kenyans to judge.

“Thank God we will have election in three months. We will press the reset button and move the country forward.”

In his campaigns, he addressed a Kenya Kwanza economic forum before holding a series of roadside rallies in  Ekerenyo in North Mugirango and at Rigoma in Kitutu Masaba.

With him were Kenya Kwanza leaders Musalia Mudavadi (ANC) and Moses Wetang'ula (Ford Kenya) and a host of politicians from the county.

Ruto asked Raila to take blame for the collapse of the Big 4 Agenda.

He said it was surprising that those who hindered the transformation of the country were now promising to rebuild Kenya.

Mudavadi said Uhuru should not complain that Ruto had not helped him during his second term.

“Uhuru had 10 years but with only 100 days left, he starts complaining that Ruto was not helping him," the ANC leader said.

"You had too many BBI and Azimio meetings than those of the Cabinet. Just stop kicking the can down the road.”

Wetang'ula cautioned Uhuru against being angry with his deputy, saying he could overreact.

“The other day you saw the President visibly angry and chiding his Deputy. He has all instruments of power. He should not be angry because he can easily abuse his power,” he said.

Wetang'ula said Uhuru should stop complaining and instead prepare for retirement.

Mudavadi, on his part, said Kenyans elected him (President Kenyatta) to better their lives and expect him to show dignity and respect to other leaders.

Ruto promised to review the NHIF rates “so that every citizen can carry an equal burden.”

He told Kisii resident that his administration will put up between 500 and 1,000 housing units in major towns in the county.

“We want to have about 5,000 housing units in the entire Kisii county so that we can end land fragmentation. We need land for farming.”

Mudavadi said it was ironical for Uhuru to ask Kenyans to join Azimio while the leadership in his Kiambu backyard is in Kenya Kwanza.

"His MP Moses Kuria is in Kenya Kwanza. His senator, MCAs and other leaders are with Ruto. Why is he asking you to join Azimio," Mudavadi said.

The tensions building up between Uhuru and Ruto must be brought under control.
Opinion
1 month ago

Raila has been campaigning in Nyeri, Laikipia and Kirinyaga counties.
News
1 month ago

He asked Uhuru to direct his anger to those he assigned his roles in government.
News
1 month ago
“WATCH: The latest videos from the Star”

You pushed Ruto out of government, UDA tells Uhuru

Kiharu MP Ndindi Nyoro said they campaigned for the duo but once it was voted in, they were sidelined
News - Page 7
1 month ago
by ALLAN KISIA Political Writer
News - Page 6
04 May 2022 - 23:00