Says they had attempted to block Kenya Kwanza aspirants from being cleared to contest.

•He urged Kakamega Governor Wycliffe Oparanya and Defense CS Eugene Wamalwa to tell Luhyas what stake they have negotiated for them, before criticising the 30 per cent reserved for them by Kenya Kwanza. 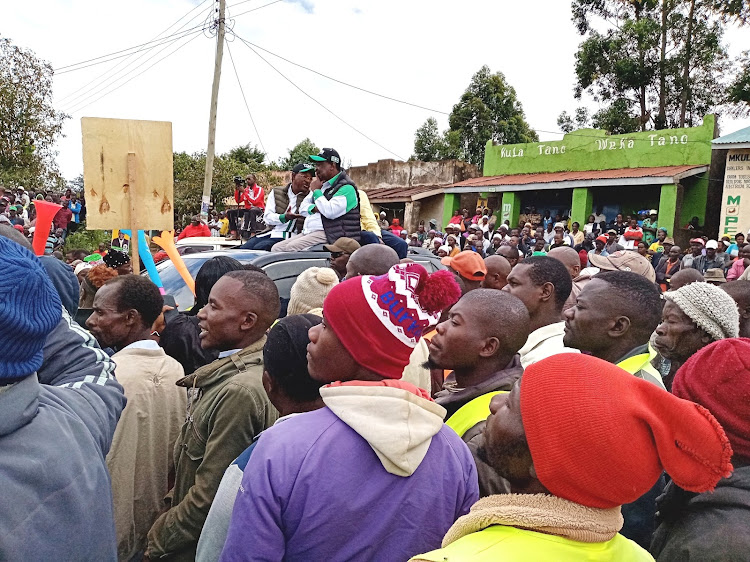 Mudavadi asked Azimio to stop using unorthodox means to block opponents from the race and instead face them.

“They tried to stop Cleophas Malala and Johnson Sakaja from contesting for governor seats. They feared facing them,” he said.

“They are targeting Luhyas, that is why they pushed Tim Wanyonyi out of the Nairobi race for Polycarp Igathe.”

The ANC leader spoke during a rally at Nambilima Market in Malava, Kakamega on Wednesday.

Mudavadi said Luhyas have no stake in Azimio.

He urged Kakamega Governor Wycliffe Oparanya and Defence CS Eugene Wamalwa to tell Luhyas what stake they have negotiated for them, before criticising the 30 per cent reserved for them by Kenya Kwanza.

“Ask them to show you the Azimio power-sharing agreement they signed. They don't know why they are supporting Azimio,” he said.

He said Wamalwa and Oparanya should ask President Kenyatta to take his own Kiambu elected leaders to Azimio before asking them to convince Luhya to support the same.

He said past regimes have ignored the Western region in terms of development even after Luhyas helped put in place the governments.

“We have supported Raila until be imagined that he is more Luhya than us. Let us see where he will get the Luhya votes from,” he said.

“We have moved across Kenya and are convinced that we made the right decision.”

Wetang’ula said Luhyas do not owe Raila or anyone, instead they are owed by those they have supported before.

Malala, who is the Kakamega ANC governor candidate, said a vote for Kenya Kwanza was a vote for the dignity of Luhyas.

UDA senator candidate Boni Khalwale said the state was using chiefs and their assistants to collect details of youth to rig elections under the pretext of recruiting them to kazi kwa vijana.

“They have been collecting the details from 500 youths in every subcounty. Why should the youths be asked their dates of birth if they have to be enrolled?” he asked.

He said they will repossess some factories that were sold to private investors at a throwaway price.
Counties
6 months ago

Raila who is currently in the region seeks to neutralize Ruto's perceived influence.
Counties
6 months ago

Wetang'ula claimed that Odinga was using government vehicles and choppers in his campaigns.
Counties
6 months ago

The team made a stop at Kola town in Machakos town.
InPictures
6 months ago