Says he wants to transform county into a wealthy region with unique environment for flourishing trade and jobs. 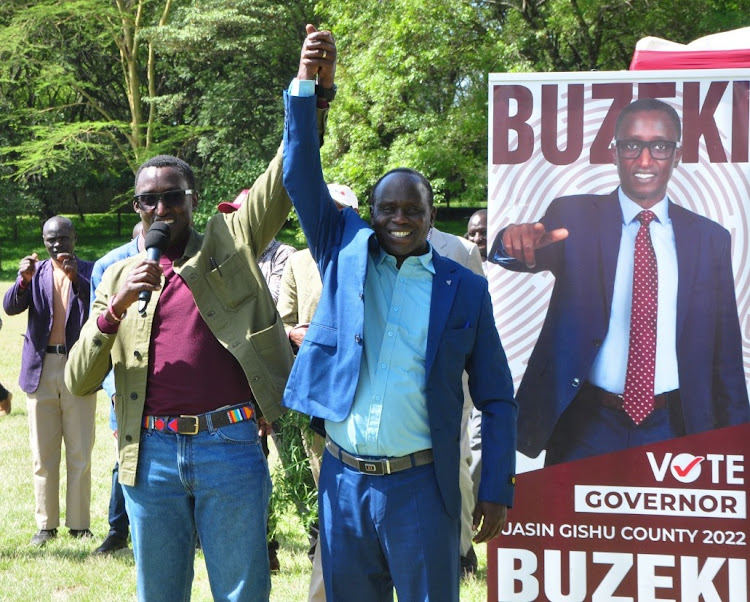 Independent aspirant Bundotich Kiprop Buzeki with his running mate Reuben Koech in Kenmosa Village on May 20, 2022
Image: BY MATHEWS NDANYI

Buzeki’s detailed manifesto is hinged on transforming the county into a wealthy region with unique environment for flourishing trade and jobs for the youth.

“Koech will soon attain his doctorate. He is a staunch Christian with strong family values and is a great friend.  I discussed with him and consulted widely before I decided that he becomes my running mate,” Buzeki said.

Buzeki is from Ainabkoi subcounty while Koech is from Turbo, which had not produced any of the top county seats in the past elections.

“I picked Koech after interviewing 12 very good aspirants recommended to me by elders,” Buzeki said in Kenmosa village.

“The endorsement shifted more than 70,000 votes from me to Mandago and we lost and said there will be another day to fight. The day has now come and we now want to take the county to the next level,” Buzeki said.

He had identified access to quality healthcare as one of the major challenges in Uasin Gishu which he would tackle effectively if elected, he said.

Buzeki is considered a top contender for the governor seat in the largely cosmopolitan county where he pledged to include all communities in his administration.

He will face off with UDA nominee Jonathan Bii popularly known as Koti Moja.

Buzeki has urged residents to choose quality leadership over party.

The county is one of the strongholds of Ruto and by extension his party UDA.

His allies have heavily criticised independent candidates, terming them sellouts being used to undermine the DP in his home region.

They named the independents they want rejected at the ballot: Buzeki, Kesses MP Swarup Mishra, who will be defending his seat, Moiben MP Silas Tiren and Ainabkoi MP William Chepkut, among others.

But Buzeki said he will not be distracted by Ruto allies' focus on six-piece voting.

He has campaigned extensively in the region, going against the UDA wave.