Says he was injured during Sunday's Kenya Kwanza rally chaos 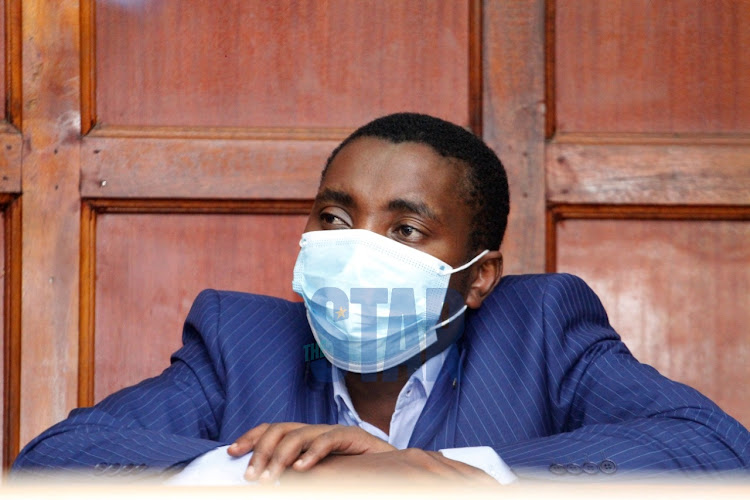 When the case came up for a mention, Mureithi's lawyer told court that his client was sick.

The lawyer said Mureithi had gone to hospital for a check-up following Sunday’s Kenya Kwanza rally, where he was injured.

“Your honour we are requesting for another date since my client is in hospital and cannot attend court,” he said.

Mureithi is vying for Embakasi East MP on an UDA ticket.

The prosecution, however asked court to issue a warrant of arrest for Mureithi, after failing to appear in court.

The mention is set for Tuesday.

The two are accused of obtaining money from Maile Menkerios, an Eritrean, in the pretext of helping him win military tenders in November 3, 2016.

They also face other counts of forgery and conspiracy to defraud.

According to the prosecution, Mureithi and Mwaura received the money from Menkerios by pretending that they had contracts to supply foodstuffs in the Ministry of Defence.

Mureithi is accused that with intent to defraud, he obtained Sh320 million by pretending that DOC FIND company had contracts with the Ministry of Defence and a sugar distribution agreement with Mumias Sugar.

The politician who lost in the 2017 general election, is accused of issuing the foreigner with a Local Purchase Order to supply sugar, maize, rice and beans to the Kenya Defence Forces.

Raila said Ruto was seeking sympathy votes by blaming everyone for his misfortunes.
News
1 month ago

Chebukati has asked all candidates to observe peace ahead of polls.
News
1 month ago
“WATCH: The latest videos from the Star”
by CAROLYNE KUBWA Court Reporter
News - Page 8
20 June 2022 - 23:00