Kanu did not sanction Gideon's meeting with Kalonzo, says Salat 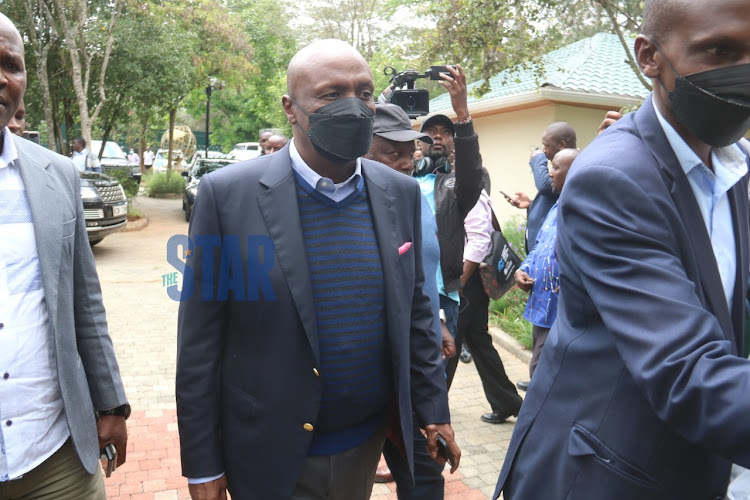 Kanu has said it does not have any binding agreement with Wiper party and that Kalonzo Musyoka's association with Baringo Senator Gideon Moi is personal.

Downplaying any fallout within the party and its ranks, Kanu secretary general Nick Salat said Kanu is fully in Azimio la Umoja One Kenya Coalition.

“I was following the party’s directions. We are not in Wiper and we have no relations with it at all, so the move by the chairman to skip the KICC meeting was not our plan but his own,” Salat said.

He further said they are not intending to quit Azimio, despite Gideon skipping the KICC event on Monday where Raila Odinga unveiled Martha Karua as his running mate.

Salat said he attended the Monday meeting as an official since it had been sanctioned by the top party brass.

He said being the secretary general, who appended the party’s signature to join the coalition, he was under obligation to attend.

He added that any resolution or association to be taken by any party official must be sanctioned.

Gideon flanked Kalonzo at the Wiper headquarters as he announced his exit from Azimio in protest after he was not considered as a running mate.

Their move to attend two parallel meetings is also sending mixed signals and putting the party in a tight spot while threatening to scuttle their relations in Azimio.

Kanu and Wiper, which are the major parties that formed One Kenya Alliance are among the more than 20 others that signed agreements to formally join Azimio.

Gideon has recently kept off the coalition’s campaigns and only appears tactically during major public events raising concerns on his political stand.

The Senator was expected to accompany Kalonzo a fortnight ago in campaign tour to the Coast, but also gave the event a wide berth.

He has also remained tightlipped one whether he was going to defend his Baringo Senate seat or run for the Baringo Central MP.

“If Oka had not been messed up, I would have convinced my brother Gideon Moi to be my running mate,” Kalonzo ,who was flanked by Gideon, at the Wiper party headquarters said on Monday.

At KICC, Salat said Kanu was fully in Azimio pledging their support for Raila in his presidential quest.

“Lacking a stand is something very bad. I am here to confirm to you to the fifth president that this time round you count Kanu inside the coalition, we are here to stay so ignore those other things you here outside there," Salat said.

Gideon leaves KICC for SKM Center ahead of Kalonzo address

A tent has been erected with seats properly arranged ahead of the announcement.
News
1 month ago

Raila and Gideon went to Kalonzo’s residence, tried to persuade him to accept the position
News
1 month ago

Kanu has no plans to leaving Azimio, says Salat

He said the independence party is IN the coalition to stay.
News
1 month ago
“WATCH: The latest videos from the Star”
by FELIX KIPKEMOI Political Reporter
News - Page 8
17 May 2022 - 23:00